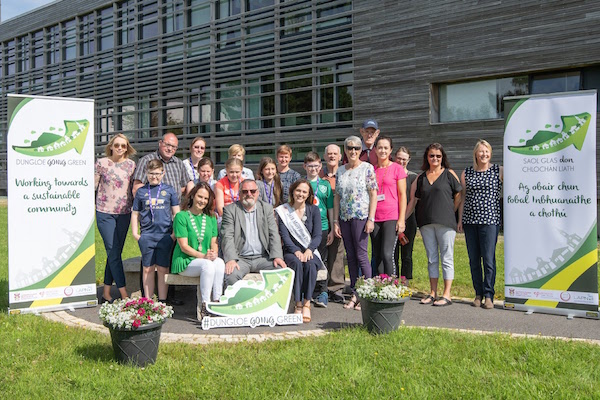 Dungloe leads the way with launch of ‘Going Green’ initiative

Dungloe is once again leading the way with it’s bid to go green just days before the town’s most famous festival kicks off.

This is a joint initiative between Donegal County Council and Dungloe Tidy Towns Committee who have been working with businesses, schools and community groups to encourage them to sign up to the ‘Dungloe Going Green’ or ‘Saol Glas don Chlochán Liath’ charter.

Speaking at the launch of the Dungloe Going Green initiative Cllr. Niamh Kennedy said that “this is the first initiative of its kind in Donegal and I would like to thank Dungloe Tidy Towns, the Mary from Dungloe Festival and the many groups, schools and businesses who have taken on board this concept and commitment in such an enthusiastic way.”

She added “the Charter for businesses including stall holders and vendors is about seeking commitment to work towards a more sustainable approach to doing business which includes reducing waste, energy and water consumption. When a business signs up to the Charter, they will be provided with a sticker that they can then display so the public knows that they are committed to the ‘Dungloe Going Green’ initiative.”

He said “This is a huge issue facing communities right across the globe and it is initiatives such as this at a local community level that will make a difference. I would also like to acknowledge the role being played by young people and children in raising this issue and because of their collective voice this is now an issue that is at the top of the political agenda.”

This year’s Mary from Dungloe Festival are championing the green agenda and have incorporated a number of new elements that will see a greater focus on recycling as well as urging stallholders and vendors to sign up to the ‘Dungloe Going Green’ charter.

Anthea Atkinson from the Mary from Dungloe Festival believes that this a positive move for the festival which is very much part of the social, cultural and economic fabric of the town.

The initiative stems from a meeting held in the town in December last where businesses learned more about the Eco Merit Certification Programme which is designed to help businesses and public sector organisations improve their environmental performance and achieve financial savings.

Suzanne Bogan, Waste Awareness Officer with Donegal County Council explained that this is just the beginning of the initiative and that so far 12 businesses in Dungloe have signed up to the charter.

She explained that there are a number of planned activities including awareness days, working with other organisations to support the delivery of the initiative as well as targeting with other festivals to ensure that a similar sustainable approach is introduced to their operations.

She also hopes that the initiative which is funded by the EPA’s Local Authority Prevention Programme will be rolled out in other towns and villages.

As part of the launch, Suzanne Bogan also spoke about the Council’s joint Conscious Up campaign with Letterkenny University Hospital. Both organisations have partnered to produce re-useable cups that will be distributed by Tidy Towns groups to local shops and businesses and the price paid for the cup going towards the local Tidy Towns committee.