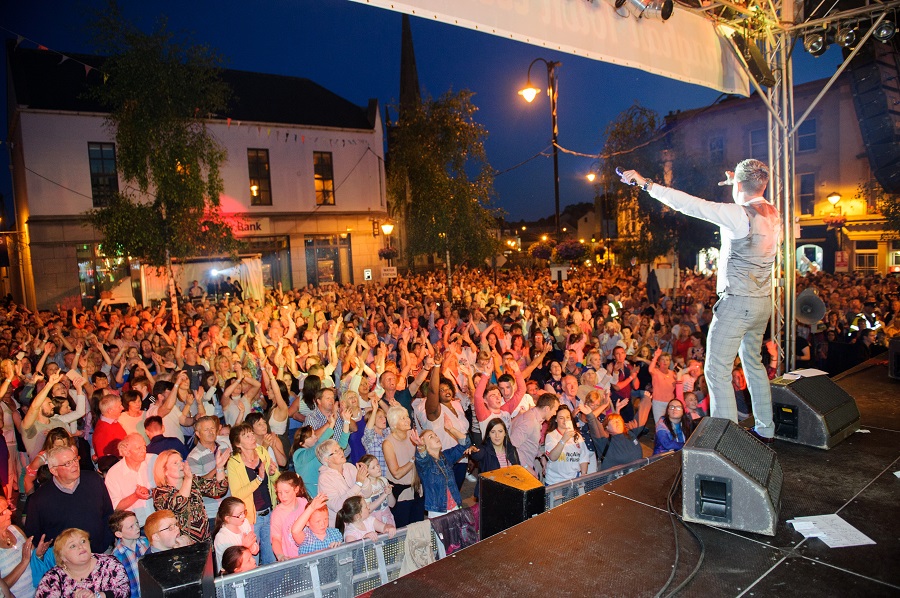 Get your dancing shoes ready for the Monaghan Country Festival!

The stage is set for the 2019 Monaghan Town Country Music Festival, which is set to draw large crowds for a wonderful weekend from July 18-21.

Jivers and music lovers will be flocking to the famous competitions and gigs, which had some great Donegal victories in 2018.

A preview of the entertainment in store took place with a concert in the town’s Diamond on Sunday evening.

It was a family affair as perennial festival headliner Jimmy Buckley was joined by his daughter Claudia to launch the festival, which will be four days packed with “fun for all the family”.

Jimmy’s voice was in as a fine a tune as his polished backing band, while Ms Buckley – now a burgeoning country star in her own right – partnered with Dad in the formalities with the same talents she brings to the duets which promise to be a highlight of Jimmy’s Saturday night Monaghan Festival performance – and his ensuing nationwide tour which commences in September.

And it was clear that the open-air country celebration that draws fans of the music from near and afar could not come around quickly enough for the pair.

“I can’t wait to be part of the Monaghan Country Festival buzz again this year,” Jimmy stated.  “This has become one of the best events of the year on the country calendar and we always enjoy being on the bill.  The welcome and hospitality afforded us in Monaghan are second to none.”

While Jimmy and the band are making their sixth festival appearance, 2019 will be Claudia’s debut but it was evident that she had already caught the bug.

“Singing at the Festival for the first time is a really exciting experience for me and I am so looking forward to meeting everyone in Monaghan and being part of some great music,” she enthused.

The Monaghan Town Country Music Festival is still a new festival, but with a popularity and following that similar events of greater vintage can only envy.

Perhaps the secret of its success lies in the simplicity of its formula, encapsulated as “A weekend of country music and fun for all the family.”

But a significant part of the success story is assuredly also the community nature of the occasion, which is founded on a voluntary effort coordinated by the local organising committee and contributed to by many civic-minded local citizens, businesses and public administrators.

And the fact that the proceeds of each Festival since its inception have gone to charities and good causes in the Monaghan area surely also helps to explain the enthusiasm and loyalty it has engendered in its annual panoply of patrons.

So, what lies in store this year? 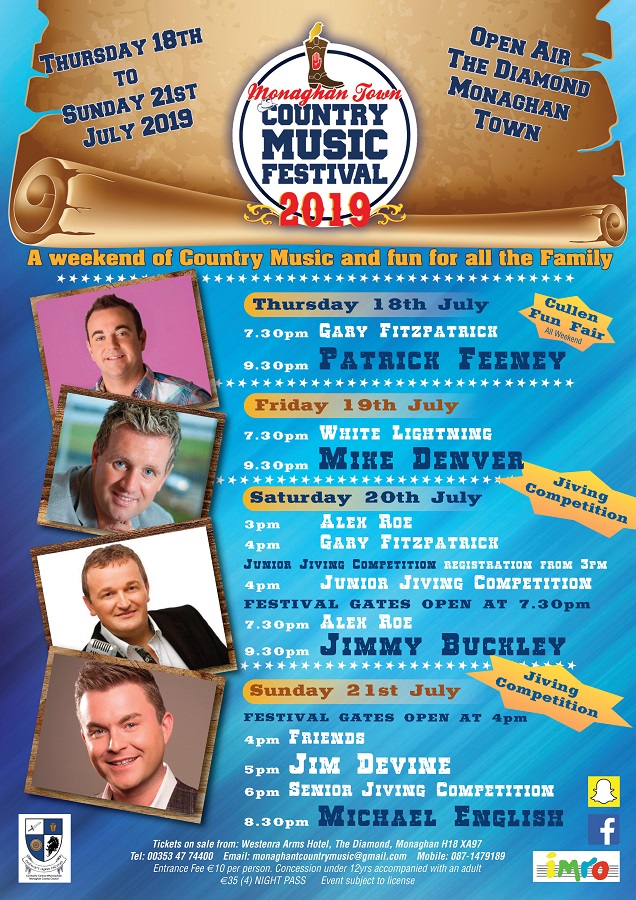 The 2019 Festival edition opens on Thursday, July 18 with Gary Fitzpatrick getting proceedings underway at 7.30, followed at 9.30 by headliner Patrick Feeney.

Gary Fitzpatrick became the toast of his native Donegal when he brought home the TG4 Glor Tire talent show title in 2018; the highly popular Patrick Feeney has one of the broadest repertoire of contemporary Irish country performers, with songs from Bruce Springsteen and Ed Sheeran and recastings of traditional folk favourites interspersed with more mainstream material.

White Lightning get the Festival Friday off to a rousing start at 7.30 pm, and the popular band will be followed on stage at 9.30 pm by Mike Denver, past Entertainer of the Year award-winner.

There is a free afternoon of entertainment at the open-air Diamond stage on Saturday afternoon, with Alex Roe inaugurating proceedings at 3 pm – the crowd will surely be clamouring for the Offaly man to perform his big hit from last year “Summer Time” – and hoping that the weekend weather will be equally in tune!

Gary Fitzpatrick returns to the Festival stage on Saturday at 4 pm to supply the soundtrack for the junior jiving competition in which contestants will vie to take home the Liam Stirrat Memorial Cup, named in memory of one of the Festival’s founding fathers.

Gates open for the Saturday evening festival programme at 7.30 pm, an encore from Alex Roe being followed at 9.30 by the aforementioned Jimmy Buckley and his band, with Claudia Buckley’s duets with her father set to be one of the weekend’s highlights.

Sunday sees another free afternoon of country heaven, performances from Friends (4 pm) and Jim Devine (5 pm) preluding what for many is the Festival centrepiece – the senior jiving competition. The event has a performance standard that never fails to enthral the crowds, who cannot help emulating what they witness on the bespoke dance floor as couples from across the land seek to win the Willie McKenna Memorial Cup, a trophy paying tribute to the late great Monaghan community man who was also one of the Festival’s formative visionaries. 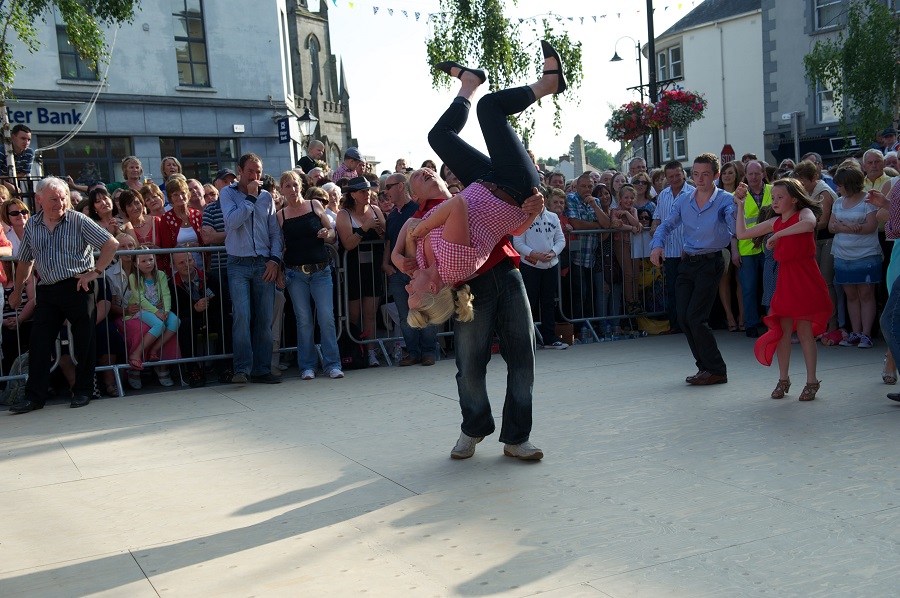 The curtain will be brought down on Festival 2019 with the 8.30 pm performance of Michael English, a seasoned festival favourite and someone who has occupied a special place in the hearts of fans of the genre since he wowed the nation with a performance on the Late Late Show at the tender age of 11.  Michael’s vibrant live set invariably encourages his audiences to enact the imperative in the title of his 2015 album “Dance All Night”. 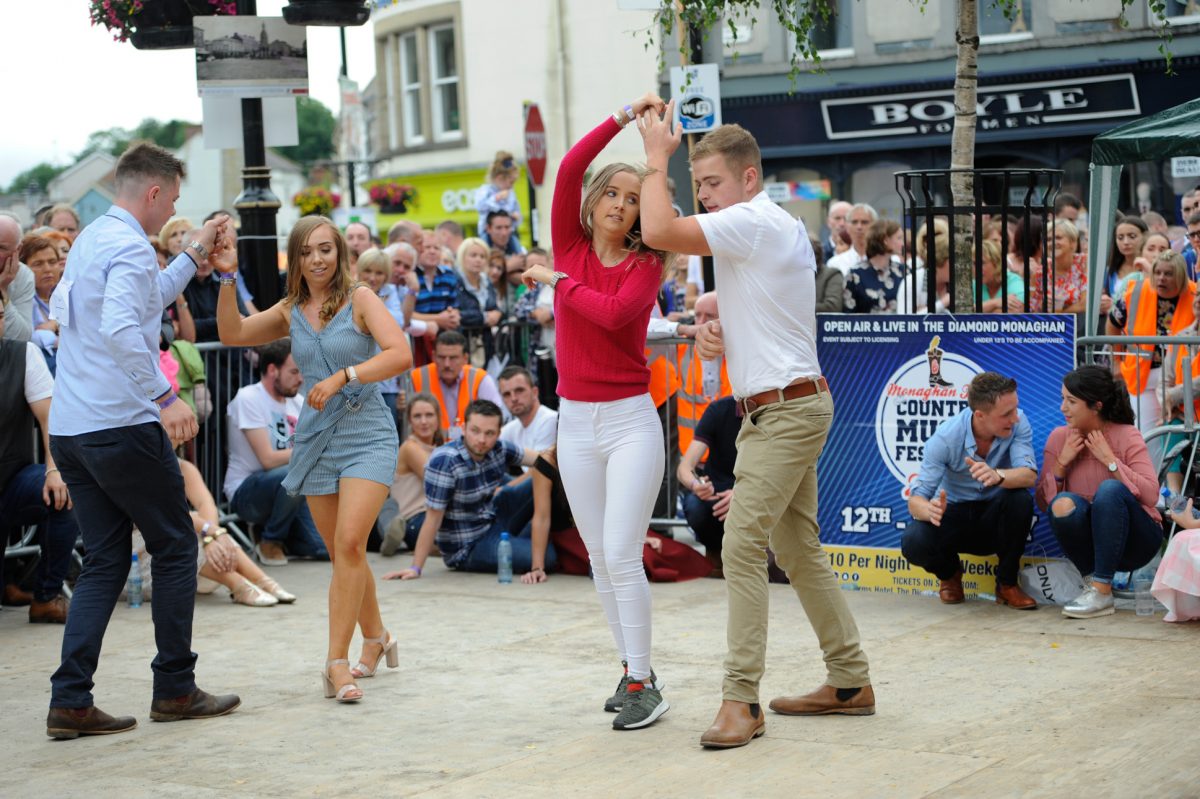 Tickets for the Festival are on offer at €10 per person per night, while €35 gets you a weekend ticket for all four nights.  There are concessions for under 12s accompanied by an adult. Tickets can be purchased at the Westenra Arms Hotel, The Diamond, Monaghan or through the Festival website, but patrons can also pay at the gates on the night.

To enhance the family-friendly atmosphere, Cullen’s Fun Fair will be in town all over the weekend.

A very well attended training session for festival stewards was held in the Westenra Hotel on Wednesday evening.  But more additions to the ranks of voluntary stewards would be welcomed by the organisers – anyone available and interested should contact the organising committee secretary on 087 – 1479189.

“Get your dancing shoes ready!” was the message from Festival Secretary Julie Brannigan in the aftermath of Sunday’s launch event

“The Festival is many things to many people,” she reflected, “but for a sizeable number of the thousands who flock to Monaghan from throughout the country and abroad for the four days of entertainment, the jiving competitions seem to supply the heart and soul of the event.  This year’s music programme is particularly conducive to dancing, and I am sure we will see some great examples of jiving not just on the competition stage but in the crowd as well.”

Julie pointed out that the Festival had become such an established part of the summer calendar that many Monaghan people in the USA and other parts of the world now planned their annual holiday at home to coincide with it.

“It brings friends together who might not have seen each other for years,” she said.  “It is the people who come who create the convivial atmosphere that everyone always talks about long after the memories of the musical highlights might have faded.  It is always a special weekend, and the organisers have worked extremely hard over the past 12 months to try to ensure that the 2019 event is the most successful and memorable yet.  What distinguishes the Monaghan Festival is that it is both a community and a charity event, and I think these facets are largely responsible for the popularity and loyalty which these four days of family-oriented fun inspire among their many patrons.”

The Secretary voiced the organisers’ gratitude for the co-operation and patience of town centre business premises during the setting up of the now iconic Festival stage and dancing area and over the four days of the event itself.

And so the stage is now metaphorically – and will soon be literally – set for one of the biggest summer weekends of entertainment that Co Monaghan has to offer.  Julie’s right – it’s time to get out those dancing shoes!