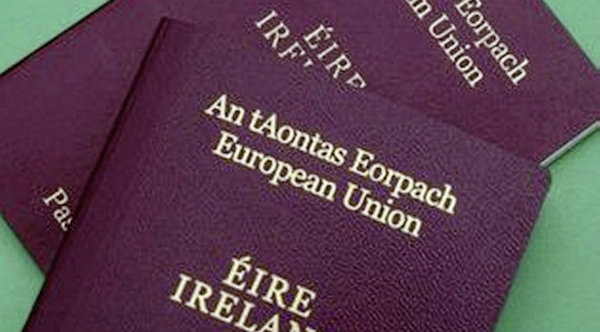 Irish passport applications soar by 214% and 650% ahead of Brexit

A dramatic increase in Irish passport applications from Great Britain and Northern Ireland is a sign that the ‘Brexit effect’ is taking hold, according to new figures.

In the last six months, there have been 47,645 first-time Irish passport applications from Northern Ireland and 31,099 from Great Britain. This represents increases of 214% and 650%, respectively.

In the same period from January to June 2016, 15,174 first-time passport applications were received from Northern Ireland and 4,147 from Great Britain.

“The impact of the UK’s withdrawal from the European Union and the loss of all associated benefits is obviously weighing on people’s minds and influencing their decision to apply for an Irish passport,” said Fianna Fáil Spokesperson on Foreign Affairs & Trade Niall Collins TD.

“Having an Irish passport is considered an asset. Indeed, the Irish passport was recently ranked sixth place globally when it comes to passport power,” Deputy Collins said.

The Irish Passport Office has taken a number of measures to deal with the high demand this year. Over 80 permanent staff have been recruited in the Passport Service offices, as well as over 230 Temporary Clerical Officers. A new Customer Service Hub was established in January 2019 to deal with passport queries and the Online Passport Renewal Service was expanded to allow staff to focus on first time applications.

The number of GB and NI applications may rise further in the coming months, Deputy Collins has predicted: “Given the ongoing political instability in the UK I would expect that the number of first-time applicants will continue to rise as we move towards the 31st October and a potential no deal Brexit.”

Irish passport applications soar by 214% and 650% ahead of Brexit was last modified: July 16th, 2019 by Rachel McLaughlin