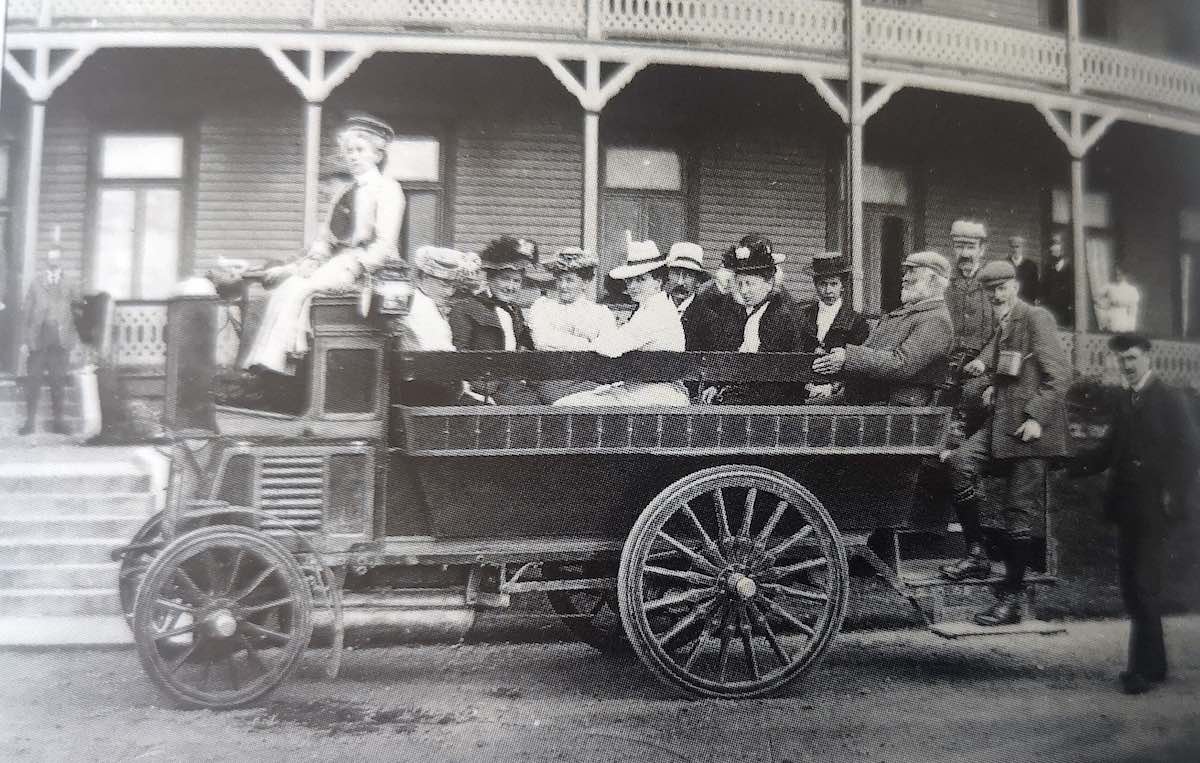 1955 was probably the best year for a proper bus service for the outer reaches of Donegal.

By this time, Lough Swilly had nearly 100 years of transport in Donegal under its belt.

Two years before that in 1953, the last train ran on Swilly tracks from Letterkenny to Derry on the 8th of August at 2.15pm.

Now one of the oldest transport companies in Ireland were switching completely from rail to road.

A very impressive map of the bus routes in Donegal was produced by Lough Swilly in 1955, which was nearly a footprint of the railway system that it left behind it.

A view of the extensive Lough Swilly Bus routes in 1955.

Historically it also was a footprint of all of those private bus companies that started up in all the small towns and villages that had no public transport years before to cater for local people.

Bus travel for the wealthy that had chosen Donegal as their holiday destination, were looked after by the Hotelier.

The first two buses registered in Donegal, “IH 2” and “IH 3” were in the name of the Earl of Leitrim which were used to transport his guests from the train in Strabane to Downings and from there to the Rossapenna Hotel, which he owned at the time. It was the must-go place in Ireland as a holiday location.

Arriving in Style to the Rosapenna Hotel one of the first buses registered in Co. Donegal IH 2 of IH 3 owned by the Earl of Leitrim.

Even air conditioning was an option on these buses back in those years, well it was when you removed all the plate glass windows from the bus on the warmest of Donegal summers.

This journey would have taken nearly four hours from Strabane to Downings, including a stop in Letterkenny and the Lough Swilly train to collect passengers from Derry City.

Roberts Brothers Bus pictured on a trip to Greencastle

Even when all the railway lines were completed and up and running, it was soon clear particularly in the vast northwest area of Donegal was not served well by the railway with stations sometimes as far as eight miles from the town it was named after, this was of no use as far a passenger was concerned.

Locals started their own buses out of villages like Keeykeel (Ward Bros) Moville, Joseph Doherty, Buncrana, Eddie Barr, Kilmacrennan Samuel Burn, and Malin town Daniel Karney to name just a few who were running bus services in and out of Derry City.

Ward’s Bros even run a bus from Kerrykeel into Dungloe in the late 1920s.

Then Lough Swilly Railway decided even as early as the late 1920s that the railway wasn’t the way to go to secure fare-paying passengers and started to look at putting buses on the road and left the train mainly for the carriage of freight.

They started to buy out the first of nine private bus operators paying the princely sum of £1,700 in 1929 to buy out Edward Barr in Buncrana for his four busses and routes including three Graham Dodge and one Leyland bus.

Over the next year, Lough Swilly bought out ten more buses and their business from four operators, including John Doherty Buncrana, who’s fleet included two Gilford and three Reo buses, Samuel Burns Kilmacrennan who had one Graham Dodge and two Guy buses.

Then there was J Kane, Culdaff, who had a Morris 14 seater and Daniel Mc Laughlin Carndonagh, who had an Albion 26 seater

The Dungloe Swilly Bus refuelling on the Main St. outside the Cope in Dungloe

Lough Swilly’s biggest purchase of buses wasn’t from bus operators directly but from a businessman called James Winters, who may have been a competitor to Lough Swilly and who bought 17 buses from four private bus operators. All of which were individually licensed by the Northern Ireland Government to work across the Donegal Border and Derry City.

He set up his business called “County Donegal Motor Company” but it took that long to get the licences transferred over to the corporate name he ended up selling his bus business for £19,200 in 1931, to his competitor Lough Swilly.

County Donegal Motor Company, as it then was called before the takeover, was made up from the purchase of four private bus operators.

The bus breaks the road

Lough Swilly now had a total of 35 buses on the roads of North West Donegal but it wasn’t always smooth sailing.

The Swilly Bus service over to Dungloe could only go as far as Gortahork nearly 20 miles short of its final destination because of the poor condition of the road.

And the Donegal County Council were not helping things, they were considering taking legal proceedings against Lough Swilly Railway buses to recover the cost of repair of the damage to its roads by the buses trying to make their journey to Dungloe.

The company that became Lough Swilly Bus Company and became part and parcel of life and memories in Donegal.

Its drivers and the summer specials to the beach in Rathmullan from Letterkenny were iconic with the front door of the bus fully opened, where one minute you could get anything from warm fresh summer air, to the wif of fresh cow manure going past a farmyard, to the familiar Lough Swilly smell of freshly burnt diesel mixed with engine oil when the bus was pulling its way up past the Brownknowe National School on the way to the seaside.

Paddy (Big Hill) Doherty originally from Buncrana bought the fading bus company in 1981 and added nearly 25 more years to the oldest transport companies life before it finally finished its last bus run on Saturday of April 2014.

In a way, bus transport has gone full circle in Co. Donegal and is back with private bus operators it started with over 100 years ago, who have contract to supply buses on the present-day Donegal Local Link, which is a nationwide programme to get bus services back to the rural areas of Co. Donegal.

At the start of July this year, local link have added a new bus route to the most northerly part of Ireland, Malin Head which runs 4 times a day 6 days a week from Carndonagh.

40 miles to catch a Swilly Bus!

On a final note about the bus company that once was Lough Swilly, I may be one that had the longest distance to travel within Donegal to catch a Lough Swilly Bus! Once a week every Thursday.

In the late 1980’s and early 1990’s, in an effort to get the Donegal Democrat out earlier up in this part of Donegal, I took on a paper run every Thursday morning as soon as the newspaper came of the printing press in Ballyshannon and drove them 40 odd miles through the gap to catch the Lough Swilly Buses as the departed from Letterkenny at lunchtime.

The bus drivers delivered the papers that evening on their bus run to the outreaches of Donegal.Three News Cubs

Over the years three young newspaper reporters from Letterkenny, Annette O’Donnell, Diarmaid Doherty and Graine Mc Guinness, some of whom worked first in the Ballyshannon office in their time with the Democrat, would get a lift home with me when I called up to collect the Democrat every Thursday.

These young reporters had the opportunity of gathering the news, typing it out on the old manual non-electric Olivetti typewriters, giving a hand early on a Thursday morning in a job called “slipping” which involved collating the old back half of the broadsheet paper into the front, which was printed in two 12 page workings or three workings when advertising features where high.

Then those same young news reporters gave a hand to deliver the final printed newspapers to Letterkenny on to the last of the fleet of Lough Swilly Buses awaiting the Democrat at the old railway station in Letterkenny and a supply of free papers for the bus drivers who ensured that the news was delivered along with their passengers to their final destination.

Joseph Doherty’s bus from Moville which was bought new in 1929 before it ended up as part of the Lough Swilly Fleet when the private bus company were bought out.

Hot off the press

We’ll say nothing of one of these young reporters who nearly burnt a carload of Democrats one Thursday when a spark from the cigarette made its way onto the middle of wrapped up Democrats, which all then had to be unloaded in the middle of Barnes more Gap, onto the side of the road to locate the smouldering roll of Democrats, chat about being hot of the press.

I have Hugo Boyle from Carrigart to thank for all this valuable information, which he came across in a second-hand book he gave me the loan of, which he purchased at a car boot sale in Letterkenny.

The book was on the history of buses in Ulster by ML Kennedy and DB McNeill and our Swilly Bus Company was included in the last few pages of the book.