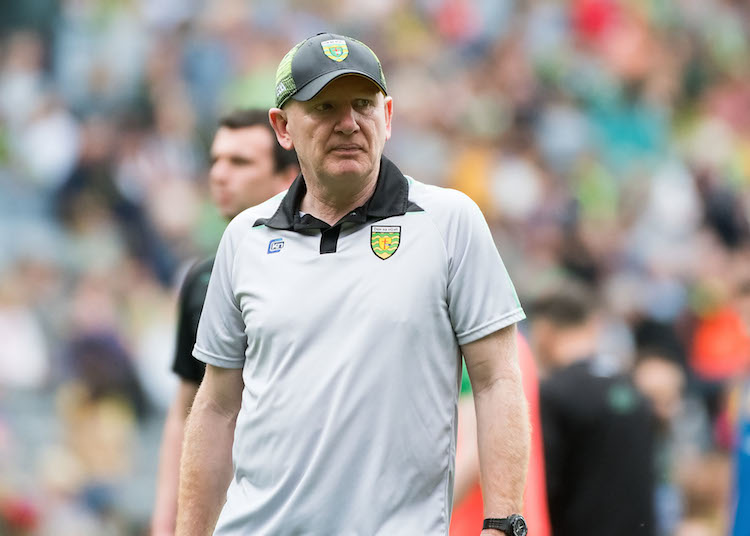 IF THERE was one thing that managers Declan Bonner and Peter Keane agreed on in their post-match deliberations on Sunday, it was that the GAA’s policy on naming teams has become rather out-dated.

Donegal have got to a stage where the first sighting of their ‘selected team’ is in the match programme.

Rarely does the actual team correspond.

It is certainly not something unique to Donegal, but at least Bonner has dispensed with the practice of circulating the ‘dummy team’ in the days preceding the match.

There are those who will have a view that a team should be named in public – but what’s the point if it’s only going to be changed anyway?

The GAA have a rule not permitting the 26 named players to be changed for a game once they’re submitted.

Kerry had to make do without David Moran on Sunday while an injury picked up on Wednesday night in training meant that Neil McGee was unable to participate. Moran and McGee were named in the respective teams listed in the programme.

“We named a squad by late Wednesday evening for Thursday morning and we lost two key players that were in that 26 that could not tog out so we were left with 24 players that we could not change,” Bonner noted.

The Donegal Board did manage to get a cross through Eoghan Ban Gallagher’s name in time after the Killybegs man suffered a broken ankle on Wednesday night.

“It is a ridiculous rule that needs to change so we can go with squad numbers.”

The media, perhaps, have to be held to account too when we are willing to publish the circulated teams given to us, most of the time in the knowledge that they’ll be altered in some shape. But still we go: ‘Kerry show two changes,’ we’ll write, in reality not having a notion just what they’ll start with.

But, sure, it fills a space and gets people talking …

Kerry boss Keane was questioned by a reporter from the Kerryman newspaper as to why he had released only his starting team on Friday night and not the subs.

“I suppose it’s difficult sometimes when you’re… it’s my first year into it, next thing you’re seeing somebody else and they’re only firing out 15. You’re saying, ‘Jaysus, I’m throwing out everything to some fella’,” he said.

Keane wondered of the reporter when he had found out the Donegal team.

“That’s the answer,” Keane said. “It’s an issue for everyone.”

Bonner suggested: “I think we should go with squad numbers.”

The hope remains that someone, somewhere was actually listening.