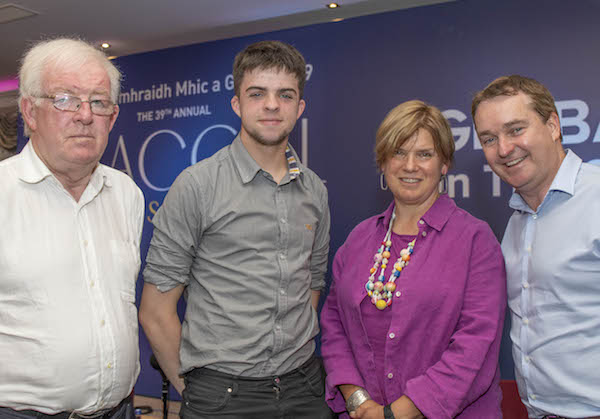 A Donegal teenager turned up the heat when he challenged Minister Richard Bruton over climate action during a speech at the MacGill Summer School in Glenties.

Conal O’Boyle, a 16-year-old student from Crana College in Buncrana, accused Fine Gael of “passing the buck onto the everyday citizen” when it comes to climate action.

He slammed the Minister for Climate Action at the MacGill Summer School yesterday.

“The Fine Gael Party line of ‘every individual has a role to play in tackling climate change’ is a lie.

“Of course, we have a civic responsibility to recycle and ensure that our towns and villages are litter free, but Mary in Dingle or John in Castlebar cannot pull the plug on oil exploration off the west coast.

“They cannot introduce a smoky coal ban or implement policy that will curb our emissions.

“That’s the job of the legislators in Government.

“Fine Gael are trying to pass the buck onto the everyday citizen of the country, when ultimately, the buck stops with them.”

He added: “We need bravery, not cowardice.

“I am a sixteen-year-old boy who cares about the living world.

“I don’t know why I have to stand up for my future at this age.

“None of those sitting beside me ever – apart from Jessie (another student activist) – had to do that.

“I can campaign and lobby and scream and shout all I want, but at the end of the day, the ball is not in my court.

“I cannot vote, so all I can do is make my voice heard.

Conal’s speech was greeted with great applause from the hundreds in the hall of the Highlands Hotel – the vast majority who were at least four times his age.

A surprised Richard Bruton sat in silence during the student’s speech and looked very down-in-the-mouth as everyone else cheered.