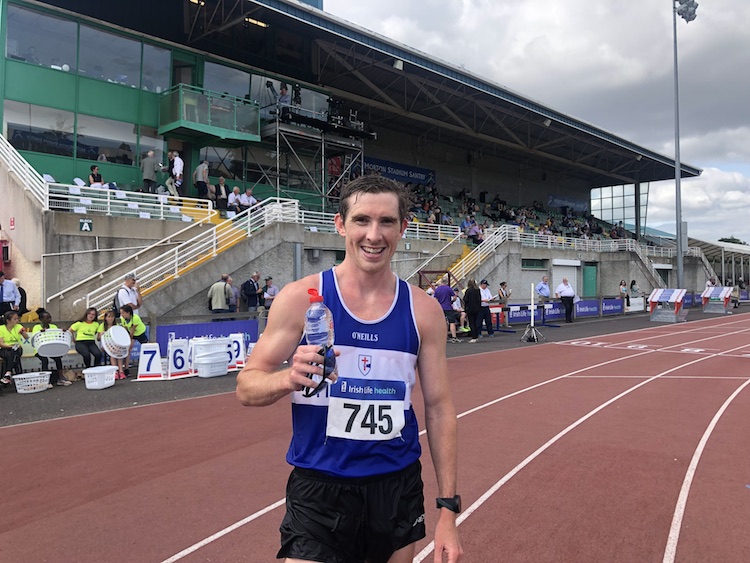 BRENDAN BOYCE believes he is in the form of his life as he looks forward to a huge 12 months.

Boyce won silver in the men’s 10,000m race walk at the National Senior Championships on Sunday.

Boyce, who has already booked his place on the Irish squad for the 2020 Olympic Games in Tokyo, was behind Alex Wright of Leevale in 42 minutes and 1.26 seconds.

In finishing fifth at the European Race Walking Championships in Alytus, Lithuania, earlier in the year, Boyce set a new PB of 3:48:13 – shaving 42 seconds off his previous record.

The Finn Valley AC man believes he should be close to peak time in his career by the time he turns up to Tokyo next summer.

“My last seven months have been very positive,” said Boyce, who has set personal best markers at 20k, 30k and 50k recently.

“It has been my best season ever so far. Everything is looking good for Doha. This is only the start so if I get seven or eight weeks of good training now, I’ll be in the hunt for a top eight in the World Championships.”

In late September, the 32-year-old will compete in the men’s 50k race walk at the World Championships in Doha.

Boyce has been showing good form since returning to action having set a new Donegal record in the 20k race walk (1:24:31) in April.

Boyce has qualified for his third Olympic Games. Having previously competed at London and Rio, the Milford native booked a place at next year’s Games in May.

He favours the long distances so his performance on Sunday offered real encouragement.

He said: “The training that I have done wasn’t much because I got married so I had a break.

“It was really good up to that and I’ll get my main block now over the next six weeks. I’m feeling really good now so hopefully it keeps up.

“The prep for this hasn’t been specific. I’m just doing long training and building my mileage for Doha. 42 minutes is only 45 seconds off my best so it’s a good performance.

“It’s good for me to get stuck in with Alex and get motivation to race hard for most of it. I was happy it was a close race.”

Boyce spent the last fortnight in an altitude tent and will spend 11 days in the Sierra Nevada mountains next month as he readies himself for Doha.

He added: “I will race in the Cork City Sports in two weeks over 3k. That’ll be an exhibition for me so it won’t be a performance indicator. It’s a brilliant meet and I’ll be glad to compete.

“I’m probably the slowest 50k walker…Anyone in the race would mangle me in 10k, but I’m very competitive in the long distances.”