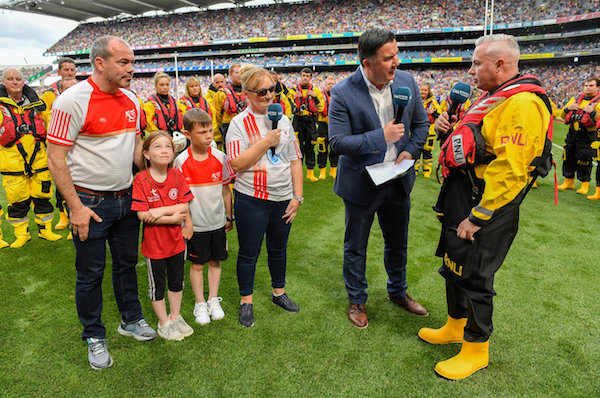 A family who were rescued last year in Bundoran took to the pitch in front of thousands of fans at last weekend’s All-Ireland Hurling semi-final as part of the RNLI’s GAA partnership which aims to raise awareness of the risks of drowning and to encourage people to enjoy the water safely.

The GAA also asked Cahir McCallion from Tyrone to present the sliothar to the referee prior to the match.

Cahir and his sister Beth (8) were swimming close to the shore on a beach in Bundoran in May of last year when they were caught in a rip current which dragged them out to sea.

Their father, Ryan McCallion got Beth safely back to shore but was unable to reach Cahir. With the help of locals the Bundoran lifeboat crew rescued Ryan and Cahir from the sea.

The pair were transferred to hospital by helicopter and ambulance. Both made a full recovery and the family shared their story about their rescue at half time in Croke Park.

Fianche McCallion, Cahir’s mother who watched the drama unfold from the beach said: ‘I can’t thank the RNLI, Coast Guard and locals enough for saving Ryan and Cahir. I’m so proud of Ryan who brought Beth to safety and went back for Cahir. Watching it happen from the shore was terrifying.

“It all happened so quickly. The sea is unpredictable and it’s easy to get caught out by it. I’d like everyone to know how quickly things can change and to be aware of the risks while in the water. Luckily the children were wearing wetsuits that day which helped to keep them warm. This partnership is a wonderful way of highlighting the message of water safety to more people.’

Bundoran RNLI Lifeboat Press Officer Shane Smyth said they are so thankful that we were able to help Ryan and Cahir on that day.

He said “It was a lovely sunny day and the beach was very busy. Despite the good weather the sea can be powerful and rip currents can occur. Our volunteer crew members drew on all their training that day. We wish the McCallions all the best and are grateful to them for sharing their experience.’

The RNLI GAA partnership comes under the GAA health and well-being programme. As part of the partnership, RNLI ambassadors visit GAA clubs around the country to give water safety advice to young people and to raise awareness of the risks of drowning with young players.

As the teams took to the pitch for the Wexford and Limerick All-Ireland Hurling semi-final RNLI volunteer lifeboat crew unfurled two giant water safety flags on the pitch of Croke Park to promote the ‘Respect the Water’ campaign and share the Float to Live message.

Rip currents are strong currents that can quickly take swimmers from the shallows out beyond their depth. Should you get caught in one, try and stay calm, don’t panic. If you can stand, wade, don’t swim. Raise your hand and if you can, shout for help.

Never try to swim against the rip or you will get exhausted. Swim parallel to the beach until free of the rip, then make way for the shore. If you see anyone in difficulty, call 999 or 112 and ask for the Coast Guard.