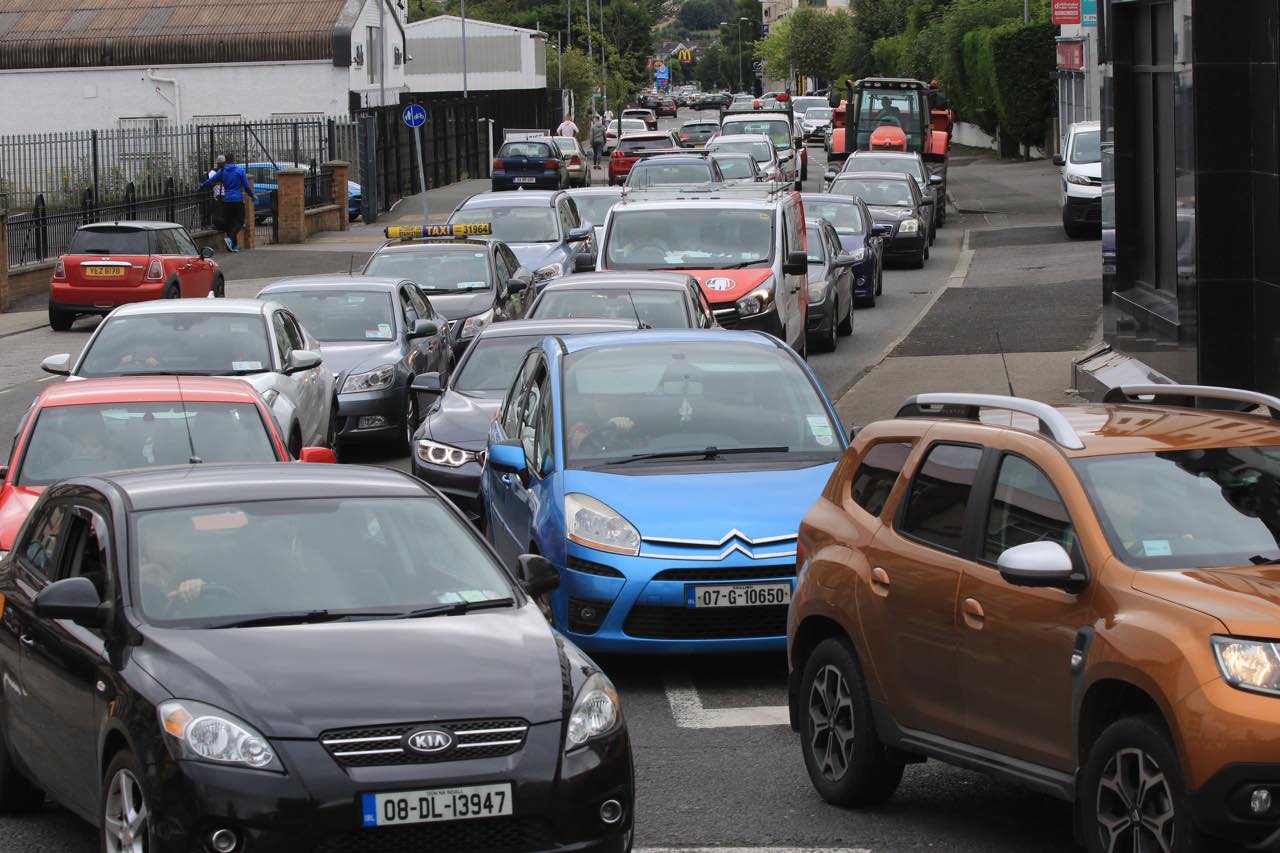 Nine minutes to home, it said, No delays it said, happy days I thought as I fired up the ignition, turned up the radio and headed on my way.

Nine minutes later I still haven’t even got out of the carpark waiting for someone to let someone out in the line of traffic in front of me.

“You’re some craic, Google.” -What planet are you getting your traffic information from, because its not the same town that I’m sitting in.

There is one question on everyone’s lips in Letterkenny these last few days, why has the traffic got so bad? And that comment is even coming from people that are used with the usual traffic jams in the cathedral town.

If it was Dublin it would be just like closing down the M50 completely and expecting the city to put up with it.

That’s what the Glencar Road now feels like to Letterkenny.

The Glencar Rd which will remain completely closed until the work in that section of the new sewerage system is completed. Photo Brian McDaid.

Closed down completely over the last few weeks as part of the ongoing upgrading of the town sewage system.

It has the people that live in Letterkenny and those who have to commute in and out of the town at breaking point.

Every morning and evening it’s easy to spend up to an hour in your car in the traffic as everything is funnelled through an ever-narrowing bottleneck.

Motorists’ that normally used the Glencar Road to avoid the traffic jams in the other parts of Letterkenny have nowhere to go now.

This is the only time that this upgrade can be done in the Glencar area because of the school traffic in this location from the three primary and two secondary schools which are now on their summer holidays, but the silent damage that these road closures are doing could be the final straw for small businesses in Letterkenny.

Since the closure of the Glencar Rd that side of Letterkenny has completely gone silent.

Traffic jams into the hospital roundabout which has bother dealing with the increased flow since the Glencar Rd has closed. Photo Brian McDaid.

Even the diversion down the New Line Road has traffic jams backed up to Burma heading up into the hospital roundabout, which now is the only way to exit Letterkenny from that side of town for traffic heading for Kilmacrennan, Cresslough and Dunfanaghy areas.

Not on the map

Inputting this motoring column together this week, I thought I would call on the services of AA Road Watch to see what they could tell me about road closures or delays in Letterkenny and what effect it was having on the traffic in the town.

So AA’s first report from Donegal showed some delays on the N13 on the Newtowncunnnghman side of Manorcunningham.

On the road works section for Donegal, it also indicated rolling roadworks on the N13 from the Dry arch and Manorcunningham.

Even under the Events section for Donegal, it mentioned the Mary from Dungloe Festival with road closures in place to facilitate the festival and that traffic could avoid the town by taking the N56.

A view of the Pearce Rd in Letterkenny which is now jammed to capacity as traffic has moved to this side of the town. Photo Brian McDaid.

After two full scrolls through every road work in Ireland, I still could not find a mention of any delays in Letterkenny on Irelands service provider the AA road watch traffic information website, not a word about how long it might take you to get out of Letterkenny this evening.

Maybe it’s because we have had that many disruptions that even AA road watch has given up on us up here.

So, if you were a visitor coming to Letterkenny for the first time, your AA road watch map would tell you nothing about the possible delays until you landed right in the middle of the jam.

Someone jested this week that skittles and even the old game kerby could be played along the roadway as it was played years ago as part of the Folk Festival in the coming weeks such is the quietness of the Glencar Road since they closed it down. Or even the old nearby cockpit, which is now a carpark could be reopened where many the difference was sorted out with fists or before that spurs.

But in the real world, most of the battles are now played out behind the wheel of your car trying to get from A to B in the town, no one giving an inch and if you do see a gap in the traffic make sure that you make no eye contact as you dart into the line and hope you’ll make it.

Even after this rant about all the traffic problems that Letterkenny is faced with, it still is my hometown and most of the time I’m still proud to be from here.

I have included a photo of an old Letterkenny road sign still along the roadside on the way into Letterkenny along the Old Lifford Rd, which bring back great memories of growing up in Letterkenny and arriving back to the town after a journey.

An old classic road sign on the old Lifford road into Letterkenny this week (complete with a. Beautiful Border Collie), always a great sight to see on the way home. Photo Brian McDaid

I’m worried what the long term effect of all these disruptions will have on Letterkenny and how many people have just had enough and are going somewhere else to do their business.

A not so happy motorist.