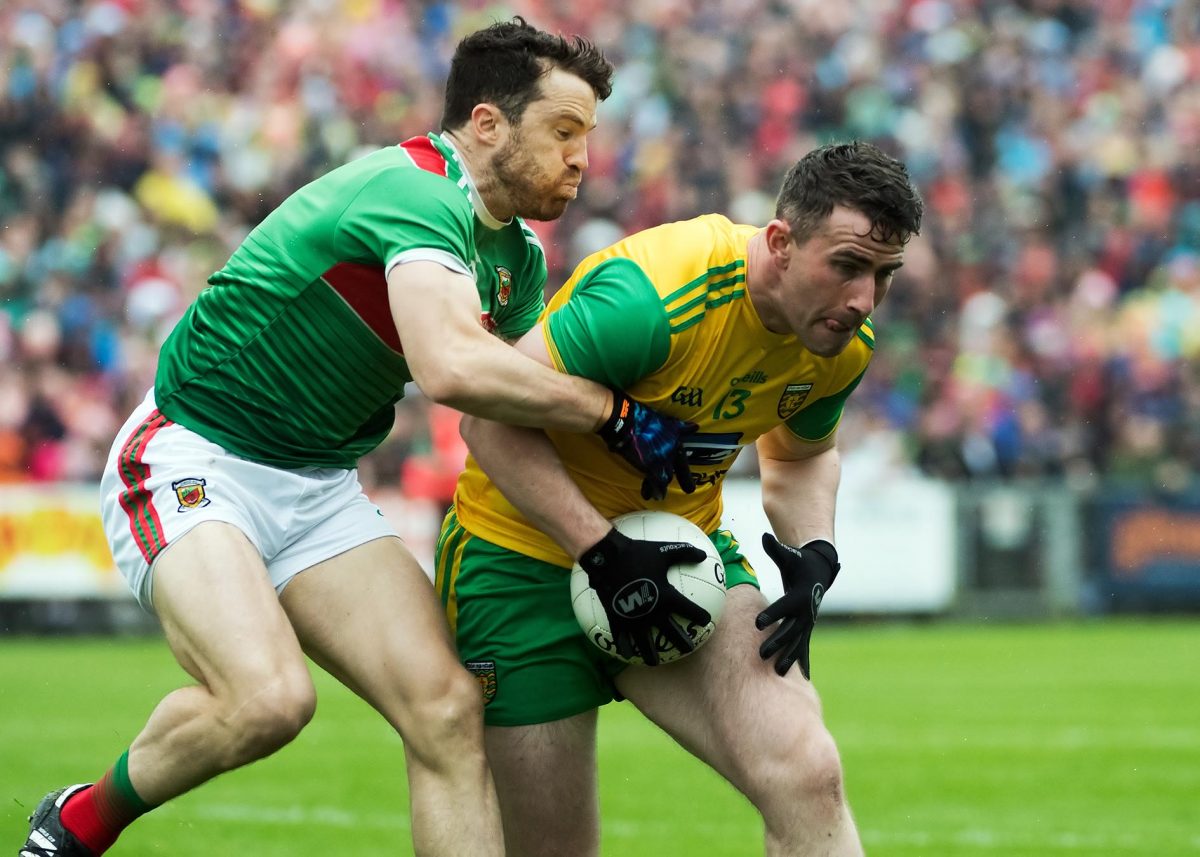 The west awakens as Mayo dump Donegal out of the championship

ANDY MORAN kicked two injury time points to ensure his Mayo side sealed a place in the All-Ireland semi-finals as they withheld any notions of Donegal comeback at Elvery’s MacHale Park, writes Alan Foley.

The Connacht outfit have been written off for their stuttering campaign since winning the Allianz League Division 1 but once again showed their massive resolve when it looked as though they were painted into a corner.

Donegal were bossed in the opening 35 minutes and couldn’t have complained at being 1-7 to 0-4 down at half-time. And although got back to just a point down in the 51stminute – 1-9 to 1-8 – when Michael Murphy scored a fine point, moments later Patrick Durcan popped over to keep a little daylight between the two teams.

Durcan was the game’s outstading player, kicking three points and doing a fine job on Ryan McHugh. Murphy was the man who carried the fight in the second half to edge even a draw that would’ve been good enough to seal a last four berth against Dublin this coming Saturday.

However, midway through the second half, Donegal missed six scoreable chances in a row – five wides and a Murphy free that dropped short – and that meant they were always chasing. When the tills were totted at the end, Donegal kicked 10 wides in the second half.

Mayo weren’t able to put the match to bed, adding to the hysteria and the home of hysteria. Lee Keegan strode through the Donegal defence and slices wide late on, while Moran was also off target.

In the end, David Gough’s final whistle brought with it a pitch invasion from the vocal home support in the crowd of 27,023, who have another chapter to write on their journey to win Sam Maguire for the first time since 1951.

Donegal’s dream ends at the same stage it did last year, when Tyrone turned on the heat in the final quarter to turn a four-point deficit into a 2-17 to 1-13 win.

Having posted 2-39 in their last two Super Eights outings – 2-19 against Meath in Ballybofey before hitting 1-20 at Croke Park when facing Kerry – Donegal posted two points in the first three minutes.

Patrick McBrearty and Niall O’Donnell were the scorers but from then on, Donegal misfired and between then and the break managed just two frees from Murphy, in the last day of his twenties.

Mayo took a little while to feel themselves in the game. Each passing point, though, brought with it a louder roar. Durcan, Cillian O’Connor, Chris Barrett, Jason Doherty and James Carr all scored to move them 0-6 to 0-3 ahead.

Patton in goal, after an uncharacteristically poor kick-out, had to make a stop from Darren Coen when O’Connor won possession.

Donegal were not making any sort of offensive imprint on the contest and having both of Robbie Hennelly’s first two kick-outs, didn’t get to test the Mayo goalkeeper who had come in for David Clarke.

The roof was creaking and on 28 minutes O’Connor snuck in around the back to slap home a dropping ball from the boot of Aidan O’Shea. Suddenly, the west was awake. Durcan added another score right on the whistle.

At half-time, Mayo were 1-7 to 0-4 in front and although a sturdy wind played its part, it was the very least that James Horan’s team deserved. Donegal had bother forming any sort of cohesiveness, spilling ball after ball and then it was the home team who were gobbling up the loose change time after time.

Mayo were guilty of kicking six first half wides but the simplicity of their chance creation would’ve been a grave concern to Bonner and his management team. It was like Donegal were trying to use their full allocation of fingers and thumbs to stop a bucket spilling with 12 holes in it.

You always got the feeling that both sides would be living on the edge and Donegal certainly were. Moran, introduced for Darren Coen nine minutes before the break, looked dangerous each and every time he got in possession.

Donegal needed a goal you felt and Murphy sent Hennelly the wrong way from a 43rd minute penalty. It was Murphy who was fouled for the award of the kick, with Lee Keegan penalised by  Gough. It made the score 1-8 to 1-5.

On 53 minutes he cut inside McGrath, made an inroad for goal and shot true and hard only for Patton to make an inspirational save as he scampered from his goal line.

With half the Castlebar crowd still drawing their break, Donegal produced the slickest of breaks and Murphy, on the turn, scored to get Donegal back to just one down.

It was the first time it looked on for Donegal, only for their poor kicking to cost them dear. Amid the clusters of warred opportunities, Daire Ó Baoill kicked two late scores but O’Connor tapped over a couple of frees at the other end. But in the end it was Mayo’s day.

The west awakens as Mayo dump Donegal out of the championship was last modified: August 6th, 2019 by Staff Writer
Facebook0Tweet0LinkedIn0Print0
Tags:
2019 All-Ireland SFCdonegalMayo