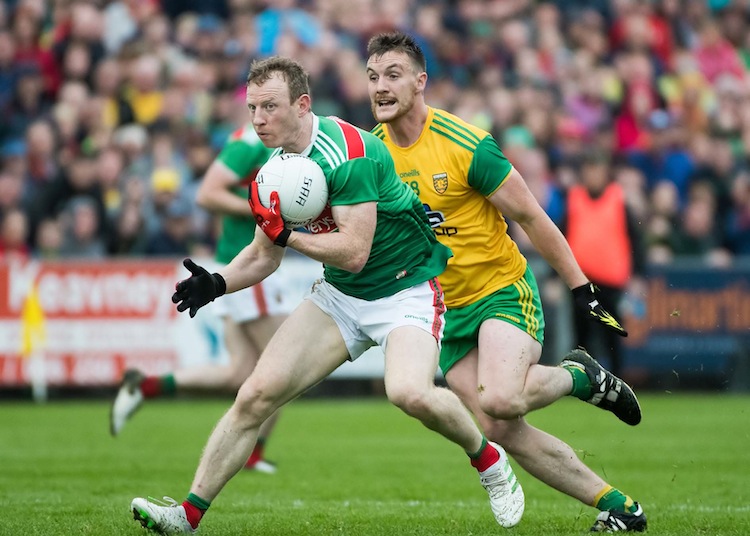 DONEGAL MANAGER Declan Bonner cut a dejected figure in the Castlebar rainfall as he assessed Donegal’s defeat to Mayo on Saturday evening.

It was a day when Donegal were left to count the cost of a series of spurned opportunities.

Donegal kicked 10 wides in the second half and 14 in total, while the Tir Chonaill men saw six scoring chance in a row go awry midway through the second stanza.

“You can’t afford to kick the wides we kicked in the second half and get a result at this level, and that’s disappointing,” Bonner sighed.

“It is hugely disappointing. We have been scoring all season and they were decent chances — not just one or two.”

Mayo led 1-7 to 0-4 at the break and, even though Donegal were energised by a Michael Murphy goal from a penalty, they could never restore parity.

“They were picking up a lot of breaks but I thought that we got it under control in the second half and started with real momentum,” Bonner added.

“The penalty brought us right back into it. But it wasn’t to be, and it’s a disappointing way to go out of the championship.

“It is fairly raw at the minute and will be raw for a good few weeks.

“But we will get a chance to sit down and look back at it. The lads will be bitterly disappointed because we just didn’t perform, that is the bottom line and we are not going to make any excuses. We wish Mayo all the best in the All-Ireland semi-final.”