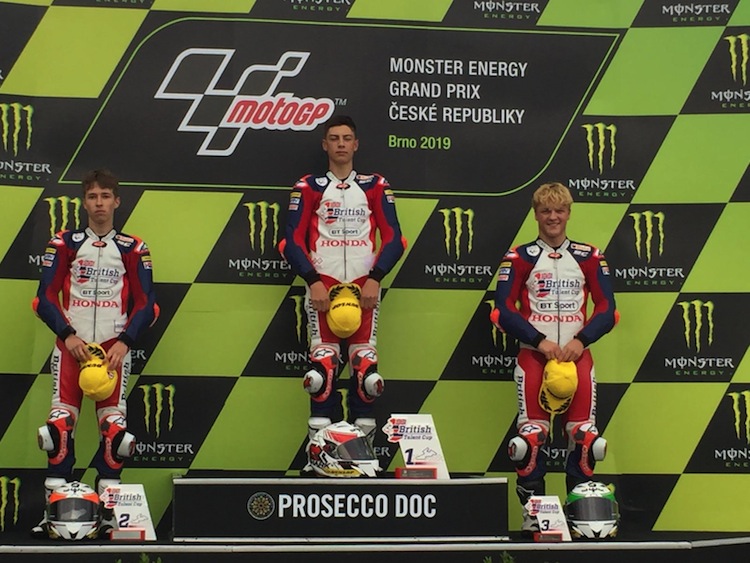 Rhys Irwin from Kilmacrennan continues to make racing history following his weekend of a lifetime, racing at the Czech Republic Moto GP as part of the BTC Road to Moto GP Championship.

A new track for all of the riders left it a level playing field so with his ability to learn a new track quickly,following his two testing sessions Rhys qualified on the front row.

Picture: Rhys Irwin on the podium in Czech Republic The first Irish Podium at A MOTO GP since the 1960’s

A long first race ended with a jubilant Rhys crossing the finish line in third place – the first time in 50 years that an Irish flag was flying at a Moto GP podium ceremony.

For race two again Rhys maintained his dominant form in the leading pack of 5 riders he finished a solid 5th place. This leaves Rhys 5th overall in the Championship.

Rhys returns home for a short break before travelling to race at the  Silverstone Moto GP UK later this month.

A challenging weekend for Irwin family saw the brothers racing in different countries with older brother Caolán racing at Thruxton BSB in the 600 race.

The Stock 600 remains the most hotly contested Championship for 2019 in the BSB with only hundredths of a second separating the top five riders, Caolán crossed the line to finish in third place his second podium finish of the season.

Following the race a delighted Caolán said: “It was hard coming to race without my Dad this weekend because he had to travel with Rhys to the Moto GP, but I had a great team around me and we’re on the podium after that really tight finish so I’m just delighted with my race and looking forward to the next round when the team will all be back together again at Caldwell Park.”