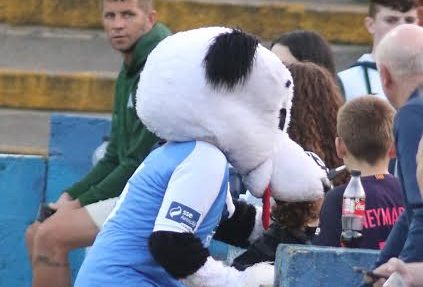 Harper was barking mad recently after being sent off during Harps’ Premier Division win over Sligo Rovers.

Donegal’s favourite canine was back out of his kennel again for the 1-0 win over Derry City last week in preparation for today’s big race – which was in aid of Aware.

Aware undertakes to create a society where people affected by stress, depression, bipolar and mood disorders are understood, supported, free from stigma, and are encouraged to access appropriate therapies.

Educating and empowering people to look after their mental health is also an integral part of Aware’s work.

Harper certainly wasn’t in Naas for some walkies as he put his paws to perfect use to beat the defending champion, Rocky The Seagull of Bray Wanderers. It was a dog eat dog race, but it was Harper who was howling after taking the win.

A thrilling renewal of the @PaddyPower League of Ireland Mascot Race sees the @FinnHarpsFC representative Harper The Dog put in a well timed challenge to take the contest in decisive style 🙌🥇 pic.twitter.com/NTvUCcVCi9