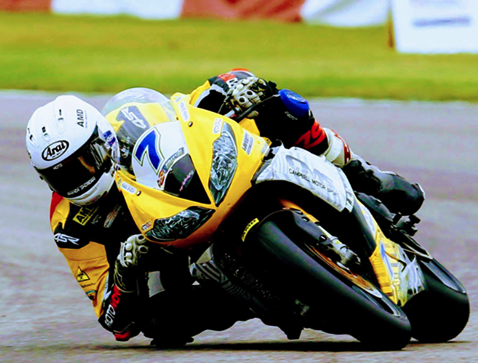 Kilmacrennan’s Richard Kerr had another superb weekend at the 7th Round of the  (BSB) British Superbike Championships at Thruxton.

Kerr, who competes in the highly-competitive Supersport class, showed once again he can run with the top eiders after securing a career-best fifth place on Sunday.

Richard qualified in seventh place on Saturday just over a second off the Championship leader and quickest rider in qualifying, Dubliner Jack Kennedy, and 0.1 second behind Northwest 200 record breaker Alastair Seeley.

Kerr’s average lap speed was just shy of 110 mph on what is the fastest circuit in the UK.

Richard lined up on the third row of the grid for Saturday’s sprint race and was confident of running with the front group. Unfortunately for the Donegal youngster, the machine developed a fuel pump problem and the luckless Kerr was losing between 5-10 mph on the fastest parts of the track, meaning ge couldn’t stay with the leading group.

He still managed a 10th place finish overall and 9th in the supersport class and more championship points.

The team soon found the fault and got the bike sorted for Sunday’s feature race.

Richard still managed to set the 8th quickest lap in race 1 and lined up on row 3 and this time was able to stay with a group battling for the podium.

Richard finished in seventh overall and fifth position in his class., just under four seconds from second position. He finished ahead of Alastair Seeley and this year’s supersport winner at both the Northwest 200 and IOM TT races Lee Johnson.

It was a super result for the young Kilmacrennan man in only his second year in the class and he also pulled clear of 6th place rider in the championship and closed the gap to fourth now to just five points behind with five rounds to go.

The consistency of Kerr has been remarkable as he and Kennedy’s team mate Brad Jones who lies in second position in the series are the only riders to score points at every race this season; a testament not only to Richard’s performances but also the team for preparing the bike each weekend.

Richard and the team are looking forward to the next round of the series at Cadwell Park and hopes to build on what has been a fantastic season so far.

Richard again would like to thank his dad and all his sponsors for their continued support this year.