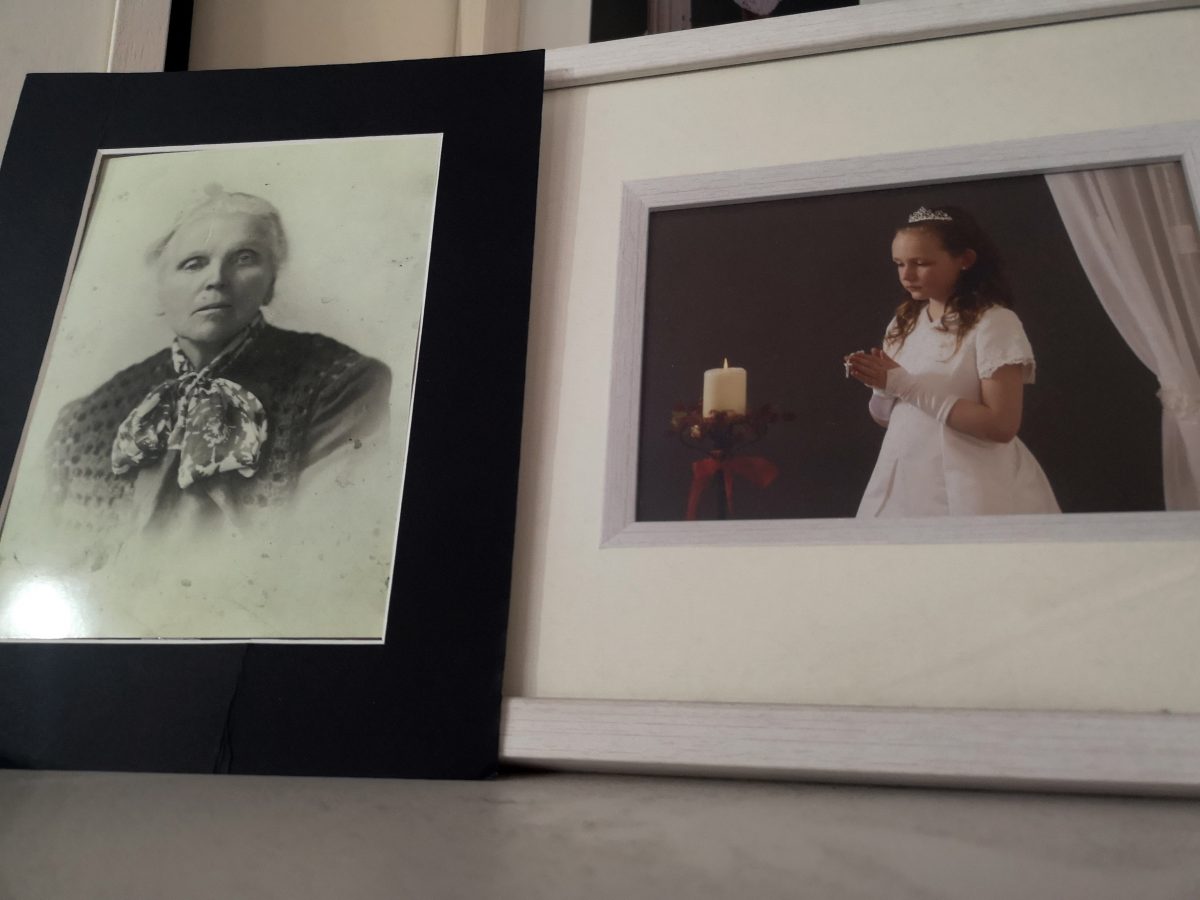 DD Motoring: Bridging a 100 year gap for a Donegal family

It’s coming near closing time and the doorbell jingles as someone calls in looking for a picture frame in a big hurry.

They are not able to wait to get a frame made to order, so they spot a display frame sitting in the studio which takes their fancy.

An old black and white photo is removed from it. It’s one of the many old photos that was in this house before it was a photographic studio or picture framing shop, from the days when it was my grandfather’s home.

The picture is of his mother Roseanne Coyle who lived up in Listack outside Letterkenny.

As I’m fitting the new photo, taping up the back for the waiting customer, the thought passed through my head, I and my great granny worked together for this customer.

My great granny’s photo is sitting frameless on my desktop, I decided to post the photo up on social media, complete with her name and where she was from.

The faded pictured of Rosanne Coyle which made the connection with the past and the present in the journey an sad story of Private John Coyle. Photo Brian McDaid.

Sure enough that evening it’s the notification bells on the phone that is now chiming as the likes and comments drifted on to the page.

As people that remembered my aunt Bida Deeney remarked the resemblance in the both of them.

Then a private message arrived from one of my Facebook friends, who I didn’t think I recognised telling me that Roseanne Coyle, my great granny, was also her great, great granny through her son John.

Growing up visiting my grandfather’s home, William Coyle at the foot of the town, I thought he had only the one brother Charlie that lived in the old home place in Listack.

And other than a brass nameplate with “J. COYLE” on it that sat in Listack for years and then ended up in my grandfather’s house after that.

The battle scares on the the brass name plate of J. Coyle 3209 who fought in World War 1.Photo Brian McDaid.

After my grandfather passed away, I asked my aunt Bida a few times about the nameplate thinking that it belonged to my uncle Johnny.

But Bida just said it was my grandfather’s older brother John and that he fought in the war and that was that.

Around 10 years ago the late Paddy Harte included me in a group that went to Belgium to visit the Peace Park which he built to remember the Irish who fought in the world wars.

I was there when families located graves of loved ones for the first time in these far off fields of France and Belgium.

Something that was never talked about at home.

And when I got home, I tried a few times to research the owner of the brass plate that we had and no one seemed to know anything about.

Paddy Harte looking through the letter and names left in the Memorial register at the war memorial. in Belguim. Photo Brian McDaid.

Then a simple post on social media this week and the power of one picture and social media made the connection with two separate parts of the same family, who both lived nearby each other for nearly 70 years!

Both having the same story to tell of the loss, in very different ways, of the same person over 100 years ago.

And either one not knowing that both had searched in their own way for Private J. Coyle who fought in World War 1.

On bank holiday Monday this week, following the posting of the single photo of Rosanne Coyle on Facebook and a few messages and phone calls later, the granddaughter of Private John Coyle, who has travelled the longest journey, called at the home of his late brother William, who once lived at Lower Main St. Letterkenny.

Celine Sweeney was welcomed in as she told the difficult story of Private John Coyle.

Celine’s grandmother Catherine qualified as a nurse in 1901 and returned to her native Donegal to take up a nursing post at the asylum in Letterkenny for a time.

John Coyle was a farmers son who was to emigrate from Donegal to Scotland, first working as a boilermaker’s assistant before enlisting with the army in 1908.

Catherine and John may have met in Donegal or in Scotland where both of them worked. In May 1913, Catherine gave birth to a son, John Joseph Coyle.

The outbreak of war was announced on August 1914 and John was immobilised that same month and was part of the 1st Battalion of the Irish Guards to go to war at the front in France.

In October that year Catherine gave birth to a baby girl at the Western District Hospital, Glasgow, her daughter was christened Roseanne Coyle after John’s Mother back in Donegal.

The notice for John Private John Coyle 3209 to head off to the war in 1914. Photo Brian McDaid.

Catherine decided to take her two children back home to Donegal in December where her own family helped her to look after them.

Her partner, still in France at the front, John’s Battalion took heavy losses, and John sustained a head injury and was taken to hospital in France before being shipped back to the hospital in England and even nearer home to a hospital in Derry.

The effects of war

In the war records that Celine gathered on her grandfather, his behaviour, which firstly described John as “a good worker”, changed to that of one who was “absent from his company” on the 13/11/14 to 30/11/14 and speaking improperly to a Sgt.

In waiting for 15/11/17 (168 hrs detention), as he was moved from hospital to hospital and even was sent home for s months to recuperate at one stage, he fought in Vivieries and the Battle of Aisne and fought back the Germans to retake a wooded area near the village of Soupir.

The Germans tried to counter-attack to seize back the ground but the position was held.

Six members of the Irish Guards were killed that day and 25 were injured – John was one of the injured.

He received two gunshot wounds one to his right arm and one to his leg.

In his medical report along with his injuries, John is described as having Neurasthenia, a medical term not used anymore, but commonly used in World War 1.

It describes a mechanical weakness of the nerves, constant headache emotional stress and depression.

Yet he still was considered fit enough towards the end of the war to sent him back to the front line in 1917.

After which his military records shows was awarded the 1914 star medal and the victory medal.

John never came home after the war, his mother Roseanne believed that he may well have died in action, and like his partner Catherine, both heard no word back.

Many years after his granddaughter retraced John steps, she was to find out that he changed his next of kin to that of another woman he married in England.

Sadly that was also to end in failure for John, who was split up in the 1920s and few were to hear of him after the 1930s.

On Monday this week Celine Sweeney, who has travelled the longest journey in putting together this very sad and long judgemental road that her family have travelled, visited the former home of her grandfather’s brother Willie and shared her account with her cousins in a book that she had commissioned on the army history of her grandfather that fought in World War 1.

While Celine was visiting her grand uncle’s house this week, which now is a photographic studio, and seen a picture of her great grandmother that was posted on Facebook that made the all-important connection this week, she got a pleasant surprise to see another familiar face in another display frame, that of her granddaughter Lauren Anne, who got her first communion photos taken in the studio eight or nine years ago not known then that there was a family connection.

And which is why the Anne in ‘Lauren Anne’ is called after her great grandmother nearly 100 years on.