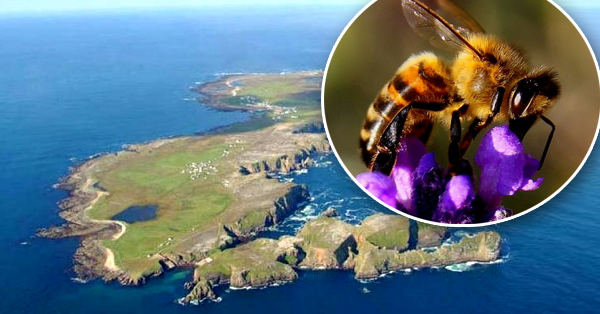 People on Tory Island are ‘buzzing’ with a project to bring much-needed jobs and a new lease of life to the outcrop by setting up a bee colony.

Islanders on Tory, which is more than 14.5kms off the Donegal mainland, plan to set up their own honey-making business.

The 140 residents on the island have already set up a committee and will spend the coming winter studying bee-keeping.

Saskia Levy-Rogers, the spokesperson for the project, said the remote island is the perfect location for such a project.

Because the island is so far from the mainland, the bees bred on the island will remain parasite free and produce the purest of honey.

The group plan to study bee-keeping this winter and will set up a small number of beehives next year and will then start full honey production in 2021.

Saskia told Donegal Daily that more than a dozen islanders have already signed up to the project.

“There is great interest in the project and we hope to achieve several goals from the project.

“We hope to create several jobs on the island to take care of the apiary as well as producing honey, beeswax and royal jelly.

“There could also be a tourism spin-off from the island from the project and in the process, we are also protecting the native Irish honey bee.

“We are learning from scratch and we are still at the very early stages of our project, but we believe in this project and we are confident that we will manage to overcome the difficulties and be successful,” she said.

However, there is a ‘sting’ in the tail for the ambitious islanders if their plan is to take off.

As a result, the islanders must first plant trees and other shrubbery to give the bees shelter.

However, the organisers hope this will in turn help bring an explosion of plant life and flowers to the island.

“Right now our main challenge is to study what type of trees and plants we could grow on the island to provide that shelter because there are simply not enough of them on the island for a bee colony.

Saskia added “If somewhere on earth looks like Heaven, it’s most definitely our beautiful island. We hope to make it even more beautiful and give it a buzzing economical boost with our project while actively taking part in the conservation of an indigenous species.”