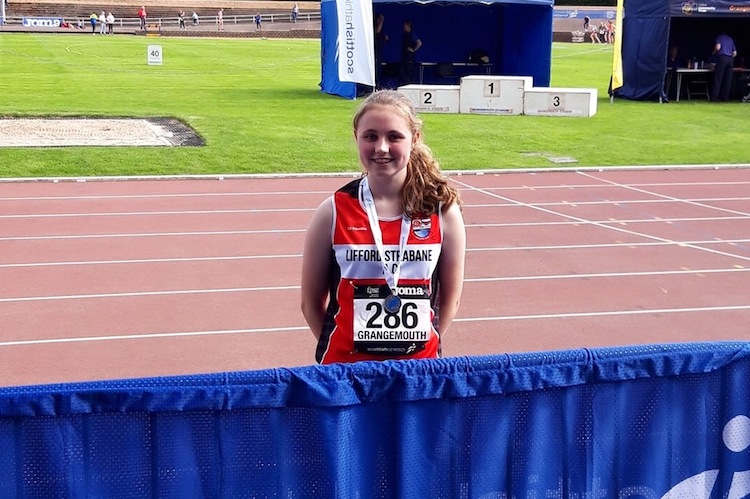 LIFFORD STRABANE AC juvenile athletes Adrienne Gallen and Jude McCrossan made the selection for the NI and Ulster Team which will travel to England to compete in the U15 and U17 Championships in Bedford at the end of August in the hammer and discus events.

This selection is a fitting reward for these two young athletes who will have the opportunity to compete against the UK’s top athletes in this the last competition of a very long but extremely successful season.

Jude recently represented Ireland in Swansea at the SIAB Schools’ International, placing just out of the medal zone with a well-deserved personal best.

This athlete will travel to Scotland at the weekend to compete in the Scottish U17 Championships.

At the U13 & U15 Scottish Championships Adrienne Gallen took Gold in the U15 Girls Discus and in the Hammer event placed a very impressive second overall to take Silver behind the UK’s number 1 Lily Murray with a new personal best time of 54.42M which is also the new U18 NI record.

In the U13 Girls Discus Caoimhe Gallen picked up a silver medal with a personal best throw of 24.42m in what is a relevantly new event for this young athlete.  Caoimhe also competed in the U13 Girls Javelin were she placed sixth overall.

Elsa Moore, Jaime McGinley and Orla McGinley all competed in the U13 Girls 800M.  All 3 girls had great runs, winning their individual heats with Elsa placing fourth overall out of a total of 40 race entrants.  This was a great experience for these young athletes of which we no doubt will see more of in the future.

News from the roads, we had a few of our senior athletes attending 2 road races on Sunday 11th August.

The athletes welcomed the water stations as they made their way twisting & turning around the rolling inclines taking in the picturesque village of Ballinode before finishing in the centre of Monaghan town.

In the 5 mile race it was Maddy McCurdy who first crossed the finish line for the club in a time 46:32 followed closely by Catherine Breslin in 46:33.

In Dublin at the Rock ‘n’ Roll Dublin Half Marathon/AAI National Half Marathon Championship 2019, making a return to racing after a prolonged injury senior athlete Claire Keys had a great run to finish with a personal best time of 1:47:36 – a PB.