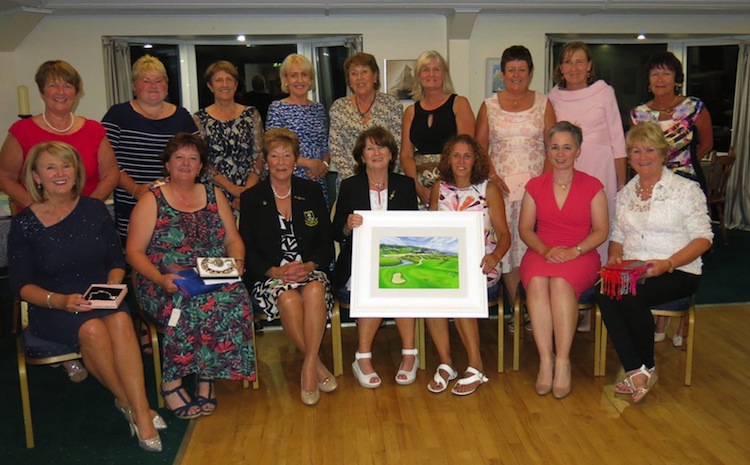 MRS MARY Flynn held her Lady Captain’s Day at Portsalon on Saturday afternoon and in spite of some hefty rain showers, there was a great turn out of lady members and visitors, producing some exceptional scores.

Lady Captain Mary laid on a wonderful array of prizes as well as a fabulous day’s hospitality.

A momentous day for winner  Sally Donlon who completed a rarely-achieved Captain’s Prize double, having also taken top spot a few weeks ago on Pat O’Neill’s big day. Sally has made a fantastic return to golf after a long break from injury and family commitments.

Sally now has two ‘Majors’ on her fledging CV – no mean feat – after carding an exceptional tally of 43 points.

Special mention also to runner-up Claire McGonagle who ensured the leaderboard had a very familiar look by carding 40 points playing off 6 to take second spot behind Sally, just as she did in Mr Captain’s prize for the Ladies on 26th July.

Sally gave an eloquent acceptance speech in English and Gaeilge, saying how proud she was to win such a special prize, an original watercolour of Portsalon’s second hole.

This was the second year running that team captain Joe Coyle led his men to a provincial semi-final but, this time, the cards didn’t fall their way.

Heavy rain ensured the Omagh course had softened significantly from the practice day on Thursday until match day.

Captain Joe put a Portsalon point on the board but it wasn’t enough as Malone grabbed their three points to ensure victory, despite some tight matches.

Well done to team members on the day Stephen Connolly, Ryan McGettigan, DP Logue and Eamon McDermott – as well as all those that played, caddied and contributed through the year.

Better news on Sunday afternoon for Cathal Canning and his Donegal League troops. They went to Ballyliffin GC for a semi-final first leg and shared the spoils with the home side, 2.5 matches each. A fine effort in Inishowen as Stephen Connolly and Eamonn McConigley grabbed match one on the 18th green while team captain Cathal was spurred on by playing partner Mark Howard banking back-to-back birdies on the 16th and 17th holes to take match two.

Another half-point came via Odhran McGowan and Patrick McDevitt in match five, as they won the 18th hole to sneak a half match. All to play for when the teams meet again in Portsalon on Sunday 25th August, with the winners set to meet either Letterkenny or Bundoran in the Donegal League final.

This year’s competition will be held on Saturday 7th September. The Lady Captain and seven ladies will form the Portsalon Team.

Sunday 25th August and alternate day Friday 23rd will be the qualifying competition. Lady members’ interested and available to play should add their name to the list in the locker room before playing on Friday 23rd or Sunday Members’ Competition.