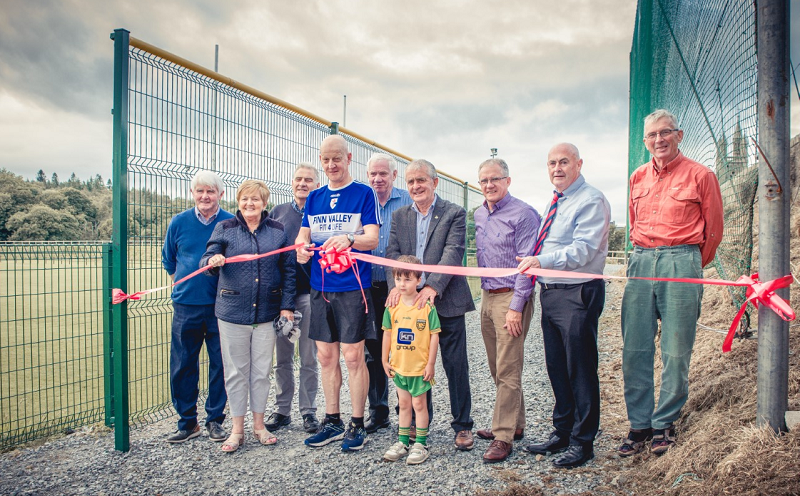 Walkers, runners and all outdoor enthusiasts have a picturesque new path to try along the River Finn in the Twin Towns.

The new Riverside walk and Trailhead was officially launched recently by Kieran Doherty, Chairperson of BASICC.

And the Finn Valley Fit for Life group launched the walk-in style – by running a section of it during their weekly meet-up.

The newly developed trail section provides an accessible and attractive walk along the banks of the River Finn.  It runs from the Ballybofey/Stranorlar Bridge, along the bank of the River opposite Drumboe Woods, to the back of the Villa Rose Hotel.

The trail gives a unique viewpoint of the road and footbridge and offers a different perspective on the ever-popular Drumboe Woods.

It is highlighted by red markers which can be easily followed by walkers to complete a circuit of the trail. The new Trail includes a new section of Drumboe Woods, still under development close to the Stranorlar Cemetery.

BASICC has been working closely with Donegal County Council, Coillte and other local community groups over the past number of years to increase the amenities in and around the towns for locals and visitors alike. Their walks programme has included The Steeple Tower, Drumboe Woods walking trail, The Creggan Woods and the development and upgrading of the Footbridge at Jackson’s Hotel, increasing signage and publishing brochures and trail guides.

There are plans in place for future developments including Street Exercise Equipment and an upgrade of the park at Ard McCool.

BASICC continues to lobby for the development of a town park and is working on plans to create a network of walks to suit all ages and abilities.

The project was funded in two stages: Stage one was the development stage supported through grant aid received under the Town and Village Renewal Scheme funded by the Department of Rural and Community Development with the assistance of Donegal County Council (DCCC).

The second stage included the development of a Trailhead and safe parking area. It also improved the accessibility of the walk by developing signage, maps and brochures.

This element was funded by Donegal LCDC, DLDC, LEADER, Donegal County Council, and the Department of Rural & Community Development through grant aid received under The European Agricultural Fund for Rural Development in Ireland 2014- 2020 “Europe investing in rural areas”.

Speaking at the launch, Mr Doherty, welcomed the opening of the walk and emphasised the importance of the development of amenities to benefit both the local community and visitors alike.

Mr Doherty thanked the staff of Donegal County Council, Donegal Local Development and LEADER for their assistance and guidance while developing and delivering the projects.  He also thanked MacCumhaill’s GAA club for their willingness to work with BASICC to develop the walk, including allowing the walk to be developed on their grounds.

New Riverside Walk and Trailhead launched in the Twin Towns

DLDC Chairman Patsy McGonagle congratulated BASICC on the opening of the walk and wished them well in the future. He added “This new river walk will be a great asset to the Twin Towns and in particular to the many walkers and outdoor enthusiast.

“We are now witnessing a major increase in outdoor recreation all around us and this development will help to support this going forward.”

Terry O’Reilly, Chairperson MacCumhaills GAA Club welcomed the development which he feels increases the attractiveness of the MacCumhaills grounds.  He thanked BASICC for their work and spoke to the benefits to the towns of sports and community groups working together with the Development and Funding agencies, and Donegal County Council.

Cllr Patrick McGowan welcomed the new trail and confirmed the Council’s commitment to developing amenities in the towns.