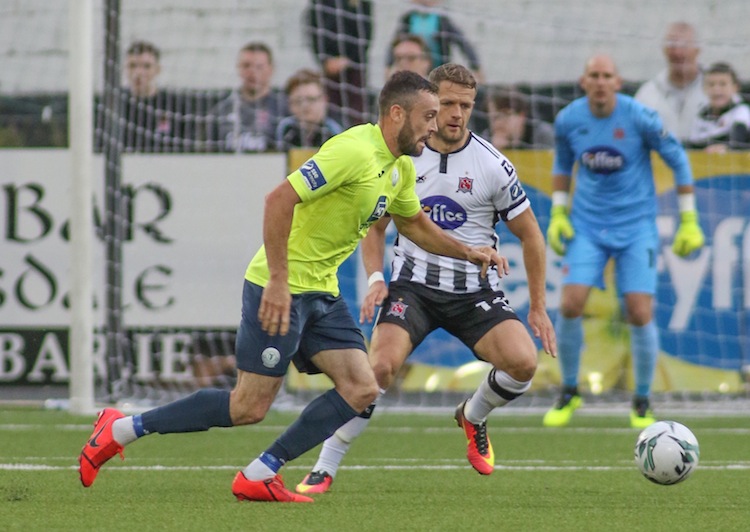 DONEGAL MAN Georgie Kelly was on the mark as Dundalk swept aside ten-man Finn Harps at Oriel Park.

The Tooban native scored Dundalk’s second as the Lilywhites extended their unbeaten run in domestic competitions to 17 games, maintaining a seven-point lead at the top of the table.

Patrick McEleney’s brace and strikes from Daniel Kelly and Jamie McGrath were on the mark as Dundalk eased away from Harps, who had Mark Russell sent off late in the first half.

The night unravelled completely for Harps in the space of four first-half minutes.

Daniel Kelly raced onto a misplaced Harry Ascroft pass in the 36th minute to give Dundalk the lead. Kelly could scarcely believe his good fortune as he latched onto the loose ball and steered home.

Harps had managed to curb Dundalk’s threat for much of the way until then but, within four minutes, they were down to ten men.

Russell, booked for an earlier incident involving Daniel Kelly, was booked a second time for a late challenge on the in-form Dundalk winger. As Graham Kelly, the referee, brandished red, Harps boss Ollie Horgan fumed at the decision.

In front of 2,217 on the Carrick Road, Dundalk enjoyed the lion’s share of possession in the early exchanges, but with little end product to work the Harps goalkeeper, Mark Anthony McGinley.

Dundalk made six changes form their 3-1 loss to Slovan Bratislava on Tuesday night. Only Gary Rogers, Chris Shiels, Sean Murray, Dane Massey and Michael Duffy were retained from the reversal that ended Dundalk’s involvement in the Europa League.

There was a start for Tooban man Georgie Kelly, whose goal last weekend fired the Lilywhites to an FAI Cup win over Cobh Ramblers.

There still appeared a European hangover around Oriel for much of the opening half. Harps sensed danger when Harry Ascroft’s foul gave Sean Murray a crack at a free-kick just outside the box.

Murray’s effort hit the top of the Harps wall but as Dundalk’s frustrations grew, Patrick McEleney sparked the place to life. The Derry man’s magnificent hit from the right-hand side beat McGinley only to hit the top of the crossbar.

Murray slammed wide from Daniel Kelly’s pull-back as Dundalk began to warm to the evening.

Soon, they were in front as Daniel Kelly steered home and it might have been two only Georgie Kelly couldn’t keep a header on target after McGinley did well to claw out Dane Massey’s header.

McGinley was called into action two minutes into the second half and the Ards man was equal to Georgie Kelly’s drive.

The Harps stopper went one better when he got down to save from McEleney’s blistering attempt from distance.

Keith Cowan passed a fitness test after fears the Ramelton man would be unavailable. Cowan, Jacob Borg, Mikey Place and Nathan Boyle were all restored as Horgan made four switches to the Harps side that lost 1-0 to Shamrock Rovers in the Cup.

Just after the hour, Georgie Kelly slid in to beat McGinley from close range as Harps’ pockets were picked again.

With Harps still reeling, McEleney nipped in between a static Harps rearguard for a third before sub Jamie McGrath lashed in a fourth from ten yards.

Sam Todd intervened to clear off the line from Pat Hoban and Hoban somehow drilled over after a sweeping Dundalk move ten minutes from the end.

Daniel Kelly was inches wide of the far post as Dundalk kept in search of more with McGinley, at full-stretch, turning away from another McEleney tester.

McEleney wasn’t to be denied again, though, as he scampered away to loft over McGinley and complete the scoring.