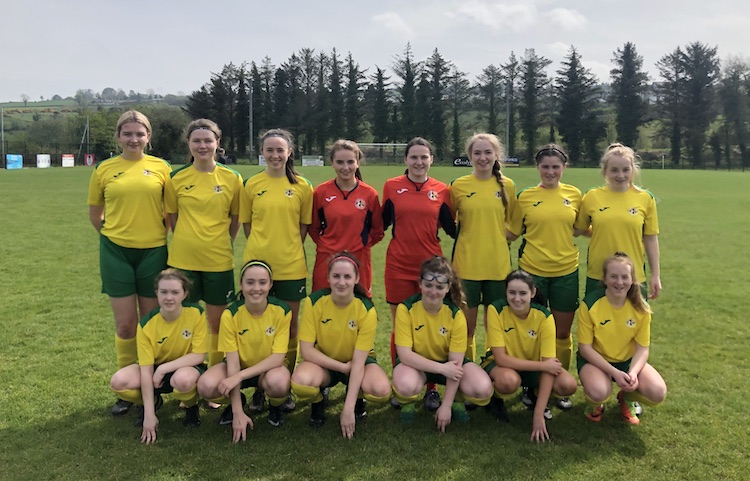 KATELYN KEOGH was the hat-trick hero as Athlone Town scored a big away win over the Donegal Women’s League in the U17 Women’s National League.

Helena McGee netted a deserved goal for Donegal early in the second half, a strike that pulled the deficit back to 3-1, but with Keogh on fire, the Midlanders took a big win from The Diamond Park.

Athlone took the lead in the 17th minute when Keogh teed up Connolly, who hammered past Neve Scanlon.

The end scoreline was particularly harsh on the Donegal ‘keeper, who made a string of superb saves.

Scanlon made two brilliant stops to keep Athlone out before Connolly’s opener, while Grace Hannon shot over from a good position.

McGee was thwarted by Athlone net minder Zoe O’Callaghan as Donegal sought a way back into the game.

Ciara McGarvey might have levelled when she latched onto McGee’s flick, but her effort had too much height.

Just before the half-hour mark, Athlone doubled the lead when Keogh arrowed in from the left corner of the penalty box.

Donegal were given a lifeline when McGee was picked out by Molly Page and the striker slammed past O’Callaghan.

The reply was instant, though, as Keogh bagged another for the visitors.

Page and McGarvey drew saves from O’Callaghan as Donegal battled gamely but they were thankful for Scanlon at the other end as the Raphoe woman denied Keogh with another save from the top drawer.

Keogh completed the hat-trick with a tidy finish and Corbett got in on the act with a delicate lob.

Mahony might have had another, but substitute goalkeeper Caoimhe Brennan was equal to her attempt.