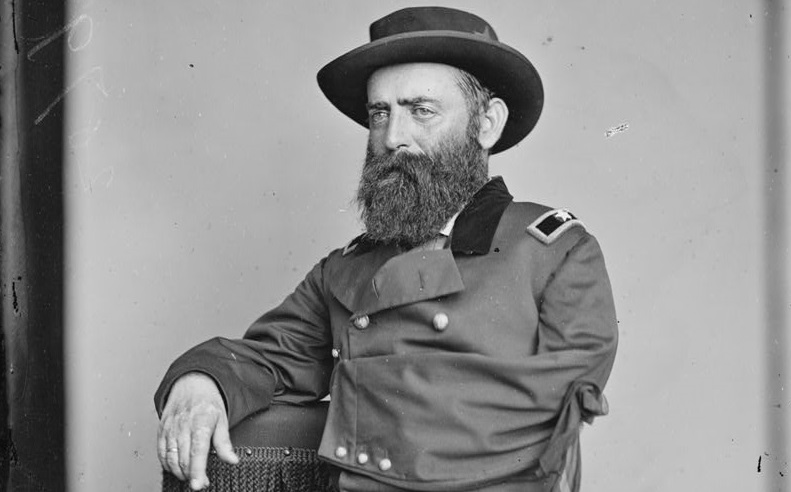 A fascinating research project is underway to find records of the many Donegal men who fought in the American Civil War.

More Donegal men fought and died in this conflict than any other war in modern history, including the First World War.

But their stories have not been widely told.

Historian Damian Shiels, one of Ireland’s leading conflict archaeologists, has set out to find records of the many thousands of Donegal emigrants who served in the American Civil War from 1861 to 1865.

He is plotting the locations of where the Donegal people came from and has the names of 155 individuals so far.

Seeing as it's #LoveDonegal Day, my updated working plot of known locations where American Civil War veterans were from in the county, after last nights entries. Currently standing at 155 separate individuals plotted. #ForgottenIrish pic.twitter.com/WIpg2BEMlA

Shiels, who is undertaking his research at Northumbria University, is appealing for anyone with details of Donegal men and women, Union or Confederate, who were involved in the conflict to get in contact via irishamericancivilwar.com. Descendants of Donegal emigrants may have key information which can be contributed to the map, which will be made live on 30th August.

Shiels will be giving a talk on Arranmore Island on 30 August, discussing one of their returned Civil War veterans, Paddy Nojeen Gallagher.

Paddy emigrated before the war, enlisted in an Illinois regiment, fought in some of the biggest battles of the war and survived Andersonville POW camp, where many Donegal men died.

Shiels has a wealth of extraordinary information on Donegal veterans, from the families of Little Donegal in Pennsylvania to William Cockburn of Ballintra, who was a Commissary Sergeant in the 2nd New Jersey Cavalry and lost a leg following a battle.

Stories include those of John Patton, a Ramelton man who emigrated to New Orleans in 1854 at the age of sixteen. Patton was a Mason who fought with the Confederate New Orleans Crescent Rifles and subsequently in the 1st Mississippi Light Artillery. He survived the war and was twice a prisoner. He died of illness at the age of 33, but his friends recorded his feats in a glowing obituary.

Stephen James McGroarty, from Mountcharles, who was a Brevet Brigadier-General in the Union Army

James Haggerty, a Glenswilly man, left Ireland during the famine to start a new life in the United States. He settled in New York and was the first man of the 69th New York State Militia to die in the Battle of Bull Run – the first major Battle of the American Civil War.

The position held on the Gettysburg battlefield by the 1st New York Light Artillery, Battery B, which was commanded by James McKay Rorty of Donegal town.

Shiels’ work is dedicated to remembering the ‘Forgotten Irish’ of the era, and any help and support would be greatly appreciated. His current research is focused on the wider Irish experience of the war. The Donegal veterans project as a test case for an initiative that he hopes to progress with Ireland Reaching Out.

Shiels is also keen to hear from anyone who may have a place of origin within Donegal for Patrick Summerville Slevin, who was Brevetted a Brigadier-General for his services during the conflict.

You can provide details via the email irishamericancivilwar@gmail.com, via twitter @irishacw or on the Irish in the American Civil War Facebook page.