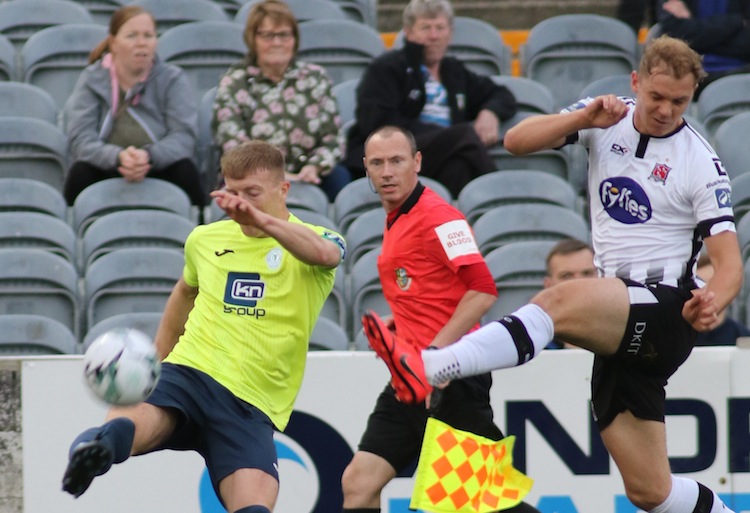 GEORGIE KELLY wants to make a big statement in Dundalk’s push for a domestic treble.

The Tooban man netted for Dundalk in Friday’s 5-0 win over Finn Harps having bagged the only goal of the game in the FAI Cup win over Cobh Ramblers last weekend.

Kelly 22-year-old’s fifth League goal of the season put Dundalk 2-0 up against Harps as the Lilywhites maintained their seven-point lead at the top of the Premier Division.

On Monday night, Dundalk face Bohemians in the EA Sports Cup semi-final with a trip to Derry City on Friday night in the FAI Senior Cup second round.

“I just want to chip in with some important goals,” Kelly says.

“You don’t know how things will go in football, but when I get these chances – even if it’s only for 20 minutes – to take the goals and make a big statement.

“You have to perform when the chance comes or you mightn’t get it again. I took the goal alright and had one in the Cup as well, so hopefully I’ll get the chance again. I’ve been chipping in but Pat (Hoban) has an unreal goal record.

“The squad is ridiculous. You have Robbie Benson and Jordan Flores to come back in. I don’t even know how they pick a squad. We could have two teams here. That’s what you need when you’re competing and also building for the future.”

Dundalk based journalist James Rogers tweeted some impressive information on Friday night, indicating that Kelly had now scored 47 career goals in 57 career starts. Friday’s was his first League goal at Oriel Park, though.

He said: “I don’t get that chance every week. When I do get it, it’s important to capitalise.

“The most important thing is getting to know the players: When the full-backs are going to cross, when the wingers tend to put crosses in. That’s the hard bit when you’re not in all the time. It’s getting into the rhythm of it.

“Overall, it was a good enough performance. The red card killed the game a bit, but we still had to put it away.

“This was a tough task. Harps are always a tough side to break down. We never underestimate a side like Harps so we’re delighted to get the win.”

Kelly cut his teeth at Derry City’s underage ranks before joining UCD in November 2015. Last summer he was lured to Dundalk by then boss Stephen Kenny, who he knew from his time at Derry and also being a neighbour.

The Inishowen man has loved his time in Dundalk so far.

Kelly said: “Stephen was a big part of me coming here. He put so much belief in me and he made me think I could make an impact. It was a no-brainer to come here.

“The facilities and the set-up here are unreal. It doesn’t compare to anywhere else and the people are great. The town is football mad. The whole place is buzzing. The GAA isn’t too heavy here; it’s a mad soccer town. When we were playing in Europe, the whole town was painted black and white. It’s great to see that.”

Kelly has backed Harps to survive in the Premier Division, but has his own mind set on silverware with Dundalk going for everything on the domestic front. This week, Dundalk exited the Europa League after a 3-1 loss to Slovan Bratislava in Tallaght.

Kelly said: “Once we were knocked out of Europe, the main focus turned to the treble. We have Bohs and Derry in the Cups, two tough draws. We’ll be well up for it.”