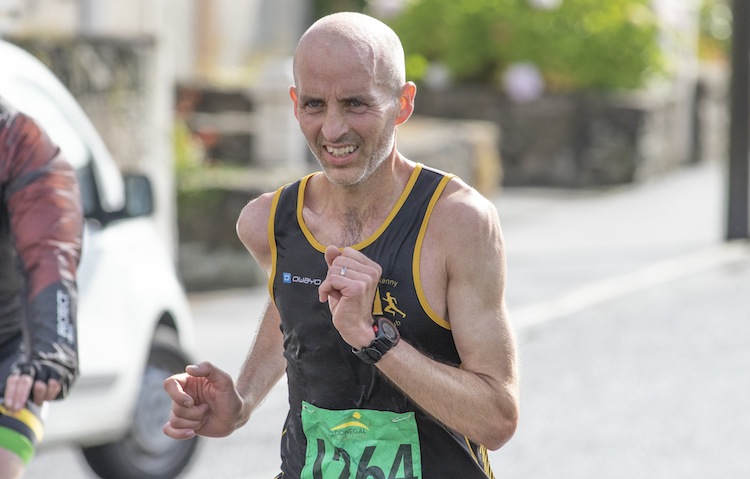 CIARAN MCGONAGLE of Letterkenny AC won his third Donegal Half Marathon in a row today – setting a new personal best time in the process.

McGonagle finished in one hour, 13 minutes and 13 seconds to claim the Dessie Larkin Perpetual Shield.

“The conditions were tough out there. Even during the warm up you knew how strong the wind was on the way out. The plan was to keep it steady for the first half and take it on a bit in the second – and that’s how it unfolded,” McGonagle said.

“There was a group of five of us working into the wind and just before the turn I picked it up a bit and opened up a bit of a gap. I kept it steady and managed to stay ahead to the finish.

“It’s a really well organised event and great credit to the organising committee for their efforts. The numbers were great to see and hopefully this is a race that will continue to go from strength to strength.”

The day was tinged with emotion as Dessie Larkin, the Chairman of the Donegal Half Marathon, who sadly passed away this year, was remembered. His wife, Mary, took part in the race and also presented the Shield in memory of her late husband.

Race director, Brendan McDaid, paid tribute to all those who volunteered and helped make the event a success.

“We got great reaction from the competitors and everyone seemed happy. We had about 100 volunteers and with their help, that of the Red Cross and the gardai, it meant that things ran smoothly and everyone got back safely,” he said.

“This is the first year that we are without our Donegal Half Marathon chairman, Dessie Larkin, who sadly passed away earlier this year.

“It was an emotional day for his family, and particularly for his wife, Mary, when she crossed the finish line. She said she had angel wings today because she got around the course much quicker than she had expected.

“It’s nice, too, that Ciaran McGonagle from Letterkenny AC is the first name on the Dessie Larkin Perpetual Shield.”