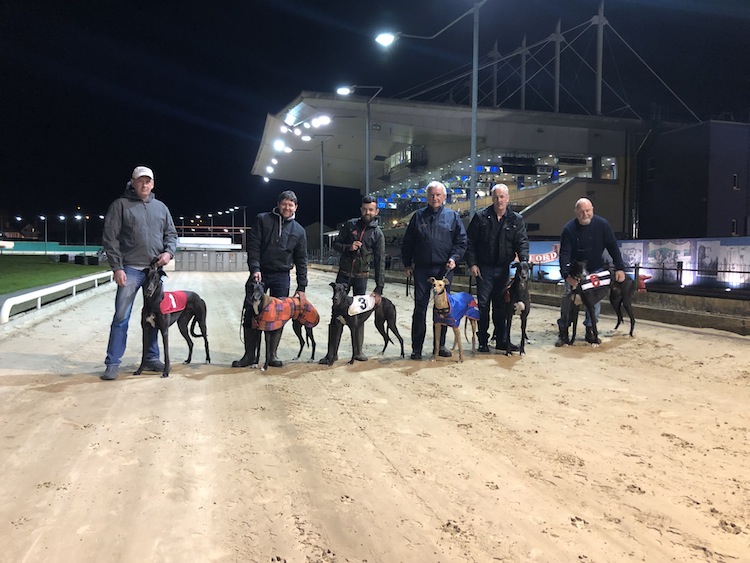 AMID EMOTIONAL scenes and with an uncertain atmosphere in the air, the curtain – for now, at least – came down on Lifford Greyhound Stadium tonight.

By Chris McNulty at Lifford Stadium

A big crowd converged for a ten-race card that was the last race night at the Lifford venue.

Picture: Dogs and owners line up before the last race of the night at Lifford Greyhound Stadium tonight.

The last race, the HPW Getting Out For The Last Time 525 was won by Super Don, owned and trained by Derry’s Gregory Moore.

Super Don, out of trap 5, won by half-a-length from Ray White’s Do It Quick.

Soon, the lights were out and the natives wonder when or even if they’d ever be back.

Last summer, the stadium, which underwent a €12million upgrade back in 2003, was put up for sale, with a €1.9 million price tag.

Stadium officials announced the decision to close ‘due to an ongoing lack of support from the Irish Greyhound Board’.

Lifford Greyhound Stadium was first opened in 1959 and, 16 years ago, underwent a huge transformation and the 17.5-acre site includes a 240-seater restaurant overlooking the track.

In the wake of a public meeting to drum up support this week, the IGB indicated that race cards of a maximum of 12 races could be maintained until a strategic review into the future needs of the Irish greyhound industry is completed.

However, no new entries were being accepted in Lifford tonight for next week.

Matthew Duffy, Race Manager at Lifford Stadium, described the feeling as akin to having ‘my heart ripped from my chest’ as darkness descended.

There were pointers to the potential tonight as an increased attendance paid through the turnstiles.

The Unraced 350 final was won by Colarhouse Candy, owned and trained by Patsy Whyte. Colarhouse Candy sped from trap 2 and finished in a blistering time of 18.88 seconds, winning by four lengths from Whyte’s Colarhouse Misty.

Convoy’s Eunan McBride had joy in the Burma Kennels Feature 525 race, as Smurfing Season pipped Dower Romeo by a neck.

An exciting 350 sprint was taken by Black Padge as Kyle McCarron’s dog edged out Titanic Jack by a short head on the line.

Kyle McCarron and crew with Black Padge after victory in Lifford

Inishowen League: All the reports

Unbeaten Letterkenny Rovers have too much for...

Tug of War Championships to be a...