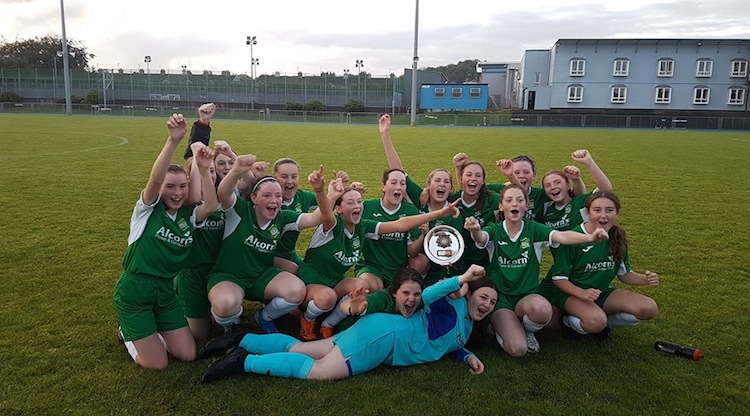 With less than a minute of extra time remaining, Hannah Hopkins popped up with a late, late bit of magic to win the Donegal Women’s League Under-16 Shield against Finn Valley.

The game seemed destined to be determined via the lottery of a penalty shoot-out when Hopkins set off on her match-winning run. Hopkins managed to get inside the penalty area and, on the left-hand side, moved into position.

Finn Valley were denied an equaliser when Bonagee captain Caitlin Hume came in with a heroic block right at the end to cannon away a goal-bound effort. Hume played through the pain barrier for Bonagee and gave a captain’s display when the chips were down.

That came after Ava Doherty’s lung-bursting surge saw her stop Claire Diver in her tracks as Finn Valley broke clear into Bonagee territory.

McLaughlin powered home to give Bonagee an early lead, but Finn Valley were back on level terms in fine fashion as Connaghan brilliantly controlled the ball and shot past Emma Doherty, the Bonagee ‘keeper.

Bonagee, who were led by strong displays in the engine room by McLaughlin and Amy Callaghan, probed intently, but couldn’t find the killer touch in the final third.

Finn Valley, with Connaghan and Diver always threatening, came alive for another spell but they too came up against a stern rearguard.

Bonagee goalkeeper Doherty made a fine stop to keep Valley’s advances out, while Millie Patton was unfortunate not to get a strong connection to a Hopkins set piece in the second half.

Eva Harvey gave a top-class display from full-back for Bonagee, but it looked like a share of the spoils for the Dry Arch team until Hopkins conjured up a last-gasp winner.