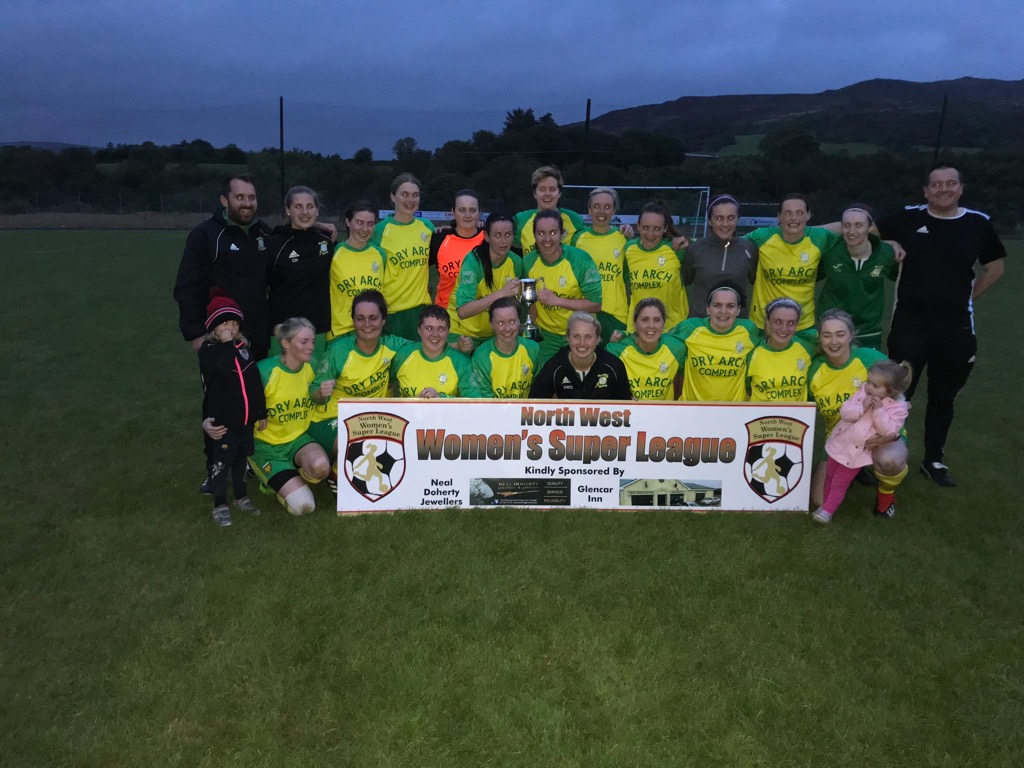 It was never going to be easy, but a super hat-trick from Geraldine McLaughlin, some heroic defending led by Maureen O’ Donnell and a slice of luck or two all combined to see Chris McNulty’s Bonagee United Ladies clinch the North-West Women’s Super League with this hard-earned victory over defending champions Illies Celtic on Thursday night.

This was a cracking encounter from start to finish between the league’s top two teams and a great advertisement for woman’s football. Illies Celtic had won the title back to back and showed just why as the tested Bonagee to the core in this thriller, with the result in doubt until Referee Danny McLaughlin blew the final whistle.

Illies Celtic had an early chance when Danielle Doherty’s free-kick caused problems but Bonagee keeper Clare Friel did well and the danger was averted.

Bonagee responded well and Geraldine McLaughlin’s cross found Deborah Kerrigan but she shot wide. McLaughlin then tested her Donegal GAA teammate Aoife McColgan but the keeper did well with a good save.

Clare Friel then saved well from Emma Doherty’s 20-yarder in the 22nd minute but was beaten two minutes later by Doherty’s back-post header from an excellent Brianna Doherty cross from the right.

Two minutes later Bonagee equalised, Friel’s long clearance found it’s way to Kaneshia McKinney wide on the left-side, she did well before passing inside to Geraldine McLaughlin who’s piledriver from 21 yards may a taken the slightest of deflections before flying over McColgan’s head into the roof of the net.

Ten minutes later the visitors grabbed the lead, the excellent Mo O Donnell sent a long clearance into the Illies penalty area, McLaughlin was outnumbered by keeper McColgan and two defenders but still managed to win possession and slot the ball to the net, 1-2 to Bonagee.

Just before half-time, both teams went close, Bonagee’s Chantelle Grant shot just over the crossbar while at the other end her teammate Suzanne Gordan, who was excellent throughout, headed away a dangerous Zoe Green cross from close to her goal line. 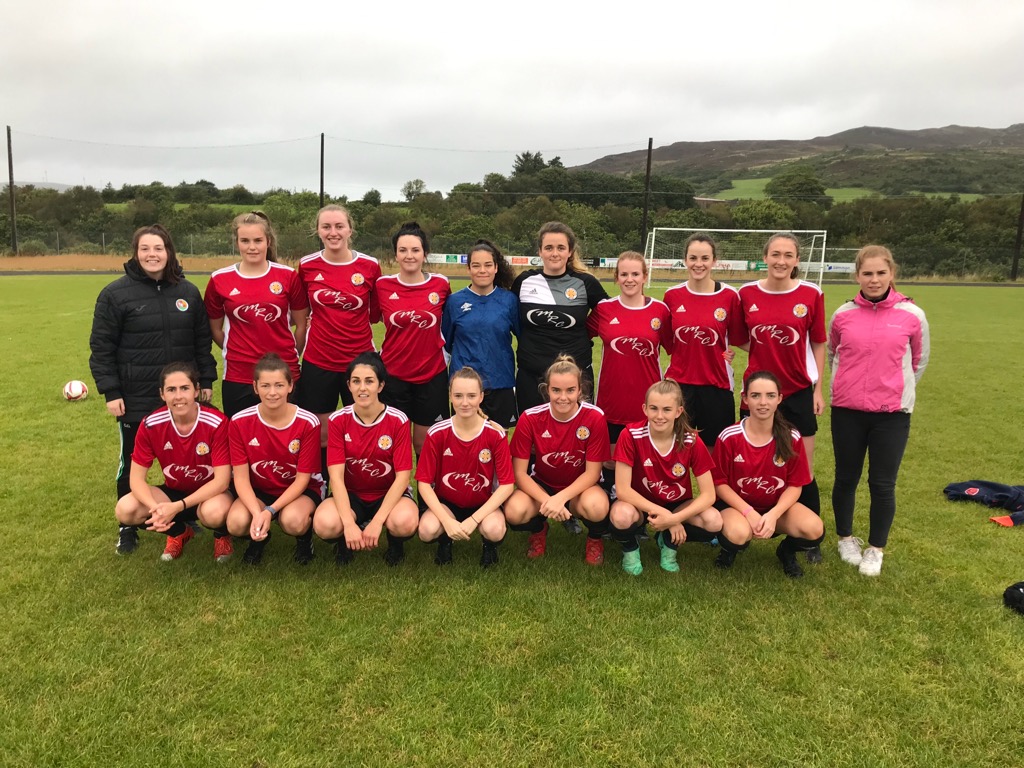 Bonagee got the perfect start to the second-half with Geraldine McLaughlin’s hat-trick goal and perhaps her best of the game.

Mo O Donnell ended an Illies attack and quickly sent a through ball for McLaughlin to chase, with defender Noreen Doherty in close attention and two others also in pursuit McLaughlin kept both her composure and ball control to race into the box before slamming the ball low past keeper McColgan into the corner and Bonagee led 1-3.

The home keeper did well to deny Kaneshia McKinney after a sweeping Bonagge attack involving four players and Illies responded in the 51th minute when Zoe Green’s free-kick flew just over.

With twenty minutes left Illies Celtic were right back in the game, keeper Friel got hands to McGrory’s piledriver but couldn’t keep in out and at 2-3 it was very much game on once again.

Bonagee’s Alice Diver couldn’t direct McLaughlin’s cross goalwards in the 79th minute and then in the final ten minute Illies really applied the pressure and Bonagee were hanging on to that slender but title-winning lead. 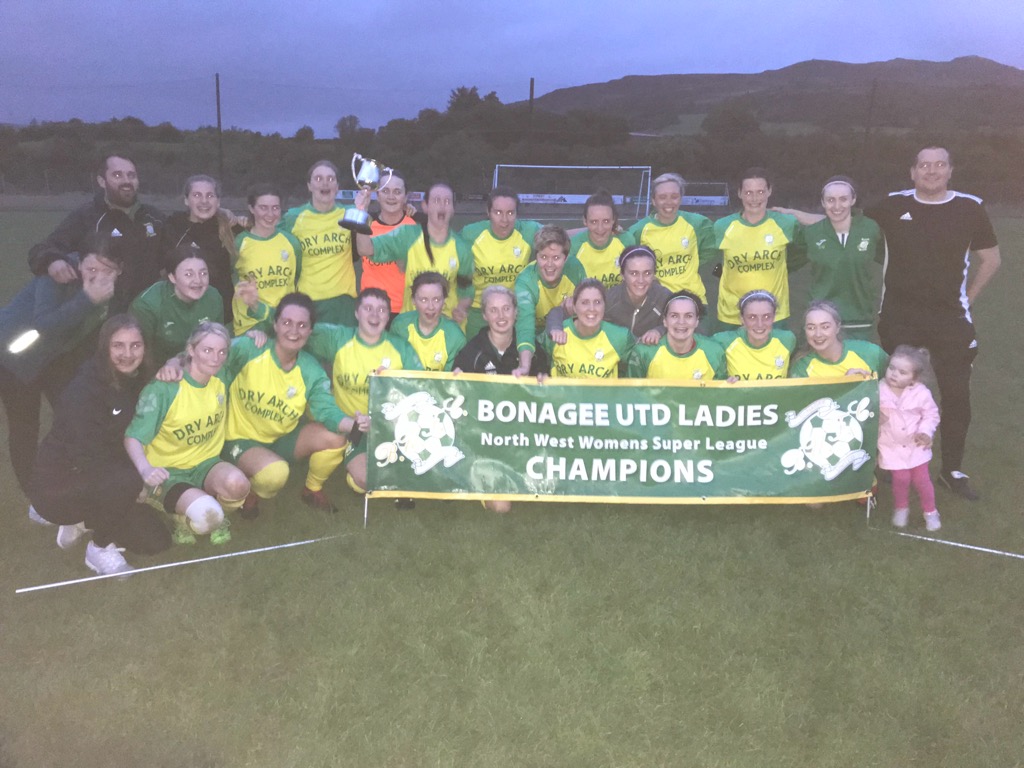 Sub Maria Carr, who had an excellent half-hour on the pitch, somehow scrambled an Emma Doherty goalbound shot off the line in the 85th minute, Mo O Donnell did a similar job to clear her lines when a goal looked on and then in the 88th minute Emma Doherty looked to have snatched a draw for Illies but her header crashed off the post with Clare Friel beaten and was hacked clear.

Bonagee United held on to survive six nerve-wrecking minutes of injury=time to take the title in impressive style with a couple of games still to play.