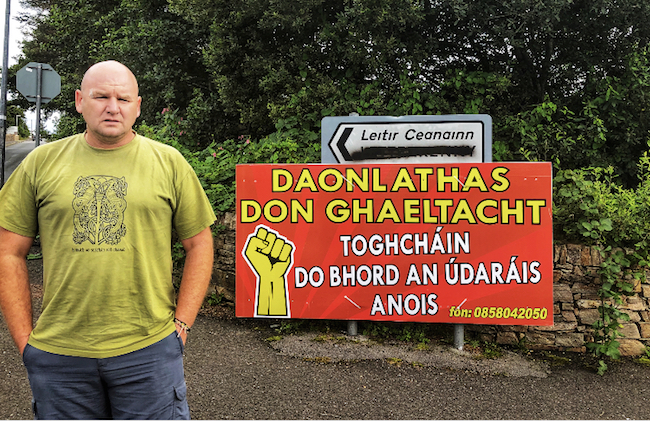 Local county councillor Mícheál Choilm Mac Giolla Easbuig has been condemned in the media and on social media for his stance on the recent spray-painting of English language road signs in the Gaeltacht.

However, he refuses to condemn the defacing of the signs.

Here he explains why the issue is much bigger than just a few signs being defaced in the Donegal Gaeltacht.

Do you still support the actions of the people who did this?

I do. Nothing has changed. No-one has said anything that would make me reconsider my support for these actions. The politicians who have condemned my stance and some people on social media are focussing on the spray-painting and are making no effort to understand why it is happening.

What do you believe was the motivation behind those who carried out the painting of road signs?

I can really only guess, but I have no doubt that frustration at the neglect of the Gaeltacht by successive governments played its part. There are very few job opportunities here and the jobs that are here are, for the most part, minimum wage or just above it. At that level, buying a car is a problem and you couldn’t build or buy a house on minimum wage. If it was young people that spray-painted the signs, they know that there is very little future for them here, where they can settle down and raise a family in the community they grew up in. But, again, people ignore all these things and complain about the damage caused and the harm it does to the tourist trade locally.

Has this action damaged the tourism sector in the Gaeltacht, as has been claimed?

I think there may be a couple of tourists who might be a little bit confused because of the spray-painting, but I think it’s important to put it in context. For example, five hotels were closed in Gaoth Dobhair prior to the launch of the Wild Atlantic Way. No incentives were offered to address that loss of vital infrastructure. In comparison to this catastrophe, daubing paint on a few road signs is petty stuff. State vandalism has caused far more damage to the tourist industry here than any amount of paimtimg over English placenames. By the way, as far as I know, only seven signs, out of thousands in the Gaeltacht, were interfered with in any way. As regards the tourist trade, you would think it is the be all and end all of our employment opportunities but it is a notoriously low wage sector and only lasts for a few weeks in the Summer. I’d rather see investment going into proper jobs that allow local young people to stay here instead of leaving the area to find work. If the government is serious about helping the community to develop and implement language plans for Gaeltacht areas, those communities have to be sustainable and they won’t be if they rely too much on the tourist industry.

Do you support the work of the Language Planning Committees in Gaeltacht areas?

I do, indeed. I am on the Language Planning Committee for Árainn Mhór and I have attended meetings of the support forum for my own area in Gaoth Dobhair and the Lower Rosses. I promised to do whatever I can to help them stabilise the language in the Gaeltacht. It is vitally important that we all get involved because all the reports tell us that the Gaeltacht is on its last legs.

Some say that it is dying but dying is a natural process. The Gaeltacht isn’t dying. It’s being slowly strangled by successive governments. You only have to look at the empty factories, the closed post offices and bank branches, the shuttered shops and the derelict hotels to see that the state has let this area down badly. Although I have no academic training in Language Planning, it should be simple enough, you would think.

Parents raise their children in the language they learnt from their own parents and the language survives. But if our young people are leaving the area to live and work, they won’t be raising a family surrounded by other families raising the children in Irish. That community is being broken and politics and economics can’t be filtered out of the equation. But it’s a massive opportunity also for the community at the moment because the state is saying that they are leaving it up to the local people to develop and implement their own language plan. It’s up to everyone to get involved and put pressure on the government to deliver the changes that the community needs.

You are an elected member of Donegal County Council. What steps can the Council take to support the Gaeltacht?

The Council has been deprived of funding by central government, so there is very little available in practical terms that the Council can do to support the Gaeltacht. However, I have spoken Irish at all Council meetings for the five years that I have been a Councillor. Other Councillors and some Council officials have accused me of being disruptive and obstructive for using my native language, so the Council could make it easier for native Irish speakers like me to use the language in their official duties. It is part of the process of pushing the Irish language out to the margins.

The policy seems to be, “Speak Irish among yourselves as much as you want, but don’t expect to speak it to us.” I accept that they have made important changes to allow me to use Irish but more could be done. As part of my duties, I meet a lot of people from day to day andtheir stories can be inspiring and heartbreaking. I meet older people regularly who only get to see their grandchildren every two or three years because their children are living thousands of miles away.

They worry about who is going to look after them when they get too old to care for themselves. Is this the future we want for our own children? I don’t think so. That is why we must organise ourselves to make real change happen, not just in the Gaeltacht, but throughout Ireland.

You claim that the Gaeltacht has been marginalised by successive governments. How can this be changed?

It’s not going to be easy. People are going to have to make concious decisions to change their own habits, especially regarding their use of Irish. They are going to have to continue to use Irish as the language of the home and support efforts to extend the use of Irish in the community. But they have to realise that voting for the same political parties as they always voted for is going to change nothing.

I believe that the entire political and economic system has to be changed before we can reverse the damage that has been done to rural and Gaeltacht communities. That can be achieved by the community organising themselves to take action to protect the things that are important to them. It is in that context that I support the actions of the people who spray-painted the road signs.