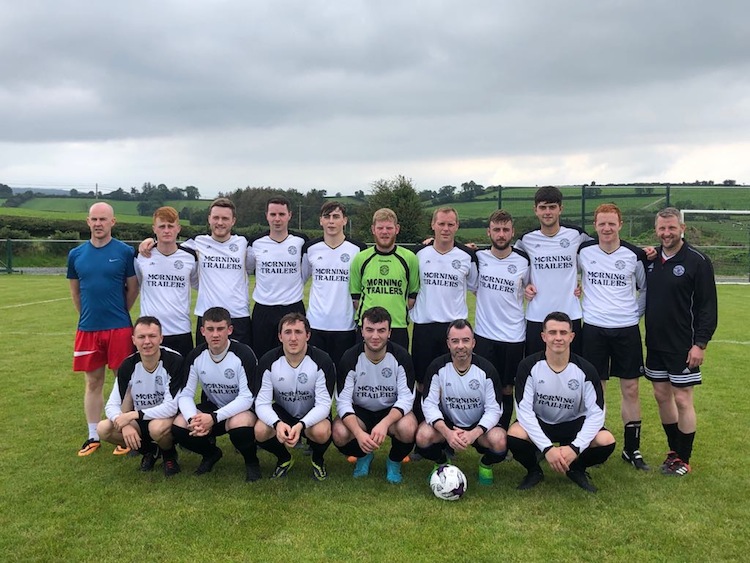 Doherty on the mark as Drumoghill spoil Swilly’s junior return

By Chris McNulty at The Moss

Doherty drilled home from the spot to give Drumoghill the edge in this tepid Brian McCormick Cup encounter.

Swilly defender Oisin Coyle was penalised for a handball offence and Doherty stepped up to fire the penalty beyond the reach of Swilly goalkeeper Dane Dunworth.

It proved the only goal of the game and meant Swilly ended on a losing note in their return to the Junior ranks – 33 years after they were one of the founder members of the Ulster Senior League.

Swilly began well initially and the lively Tyler Durning – back from a spell with Derry City’s underage system – riffled wide after cutting in from the left.

Durning tried his luck again just before the half-hour, but had a similar result as he shot on the turn from the right-hand side of the area.

A Durning free invited a header from Damien Friel and, after he headed across goal, Matthew Sweeney flicked over the top.

Earlier, Drumoghill’s Liam O’Donnell called Dunworth into action from a free kick, while it took a Sweeney intervention to keep O’Donnell’s header from crossing the line late in the first half.

Ryan Carlin shot narrowly over as the home side threatened, but the move of the half ended with Michael Toner, the Drumoghill ‘keeper, superbly denying Durning’s blistering shot.

The half-time tea was still being sipped by the attendance when the game-changing moment arrived and Doherty made no mistake. The award seemed harsh on Coyle, who appeared to know little about the incident as it played out, but ref’ Con McLaughlin pointed to the spot and, soon, Doherty was wheeling away after tucking home the game’s only goal.

Another Friel header caused problems as Swilly looked for a way back, but the Lennonsiders couldn’t force an equaliser with Toner saving well from Durning again late in the game.