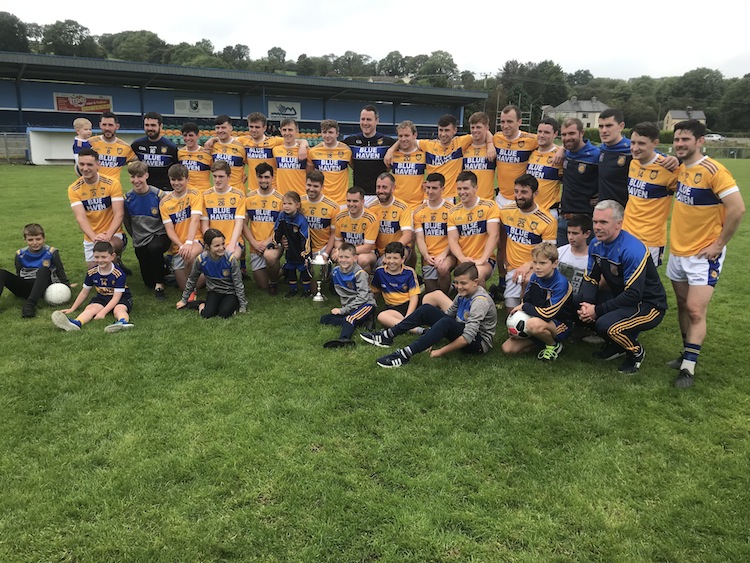 KILCAR registered a high-scoring win over Milford as the Towney side were presented with the Division 1 League trophy at Moyle View Park.

By Charlie Collins at Moyle View

Barry Doherty’s team claimed their 16th League win of the year on a day when they had 10 different players on the score. In spite of the absence of Patrick McBrearty, Mark McHugh led the way with seven points.

Two goals by Marty Doyle, netted either side of half-time, made a game of it for a time, but Kilcar had enough about them to survive the scare.

Kilcar were firmly in command when Barry McGinley was put through by Matthew McClean and he clipped past Caolan McGettigan in the ninth minute.

Kyle Black and Luke Barrett stemmed the floor only for Kilcar to widen the margin to nine.

However, Milford were handed some semblance of a lifeline when Doyle fired to the Kilcar net in the final minute of the first half.

Christopher Barrett intercepted a kick out from Eamonn McGinley. While the Kilcar ‘keeper saved his initial shot, Doyle blasted home from the rebound.

Doyle’s second goal, six minutes into the second half, pulled Milford right back into it and there was just a point between them when Luke Barrett drilled over.

Matthew McClean and Ciaran McGinley stemmed the pressure for the visitors before Ryan McHugh and Eoin McHugh registered to give them some breathing space again.