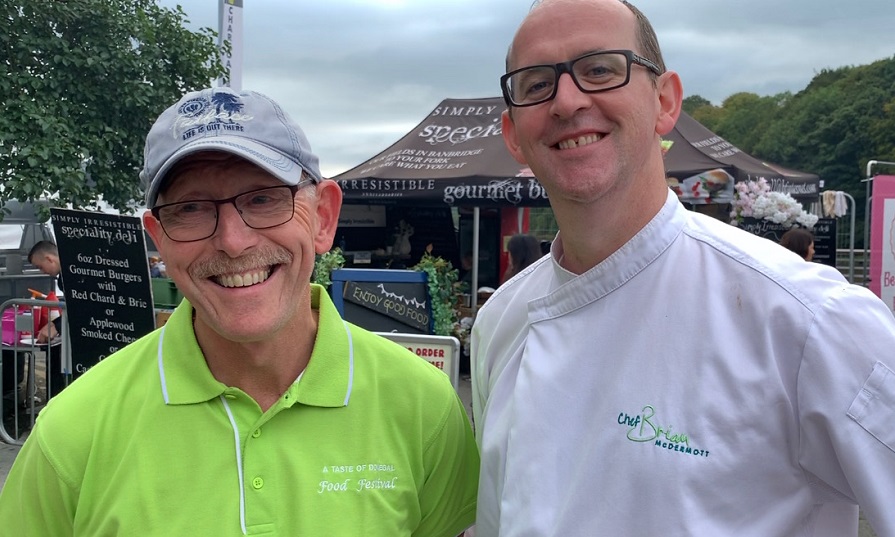 A Taste of Donegal: A delicious success

The 11th A Taste of Donegal Food Festival stirred the senses of thousands of attendees over the weekend in Donegal Town.

An estimated 25,000 foodies flocked to the pop-up village from Friday to Sunday to feast on the array of dishes and products on offer at the major festival.

Over 120 exhibitors, local and celebrity chefs, eager volunteers and countless members of the community came together to make the event another success this August. And Donegal Daily was there to share a sample of everything that was happening on our Live Festival Blog.

The mouthwatering smells of cooking drew locals and visitors from the Diamond and people were queued up Quay Street to get into the festival on the sunny closing afternoon.

Friday’s launch party was a thrilling affair, with special guests filling the demo tent for the ‘A Passion to Inspire’ Awards.

Daniel Mullarkey was named the overall winner of the competition, marking two in a row for the Tara Hotel Killybegs Chef.

One friend of the festival was kept close to the hearts of many this year – Gerard Molloy.

Mr Molloy was a judge of A Taste of Donegal and a key supporter of the event. He sadly passed away in January 2019, but his family have sponsored a trophy so his contributions will live on.

The Gerard M Molloy Memorial award for Best Newcomer was presented to Forhad Murshed of Chandpur. Chef Murshed said it was a proud moment in his career, having moved from India to Donegal in September to join with the family-led business.

The weather was clear and calm for a perfect fireworks display over Donegal Bay on Friday night to celebrate the festival opening.

Saturday was an exciting day for little foodies, as the Cherrymore Kids Kitchen was opened for the first time. The marquee was specially designed for a packed schedule of fun food and craft classes and it was a big hit with families.

Crowds came and went, enjoying a tasty mix of browsing, dining and entertainment. New products were launched, new dishes were sampled and many new connections were made over the three-day event.

Donegal Chef Brian McDermott kept everyone well-informed as MC in the demonstration tent, which featured some of Ireland’s top celebrity chefs and local stars on the stage.

The sun made a welcome appearance on Sunday for the final day of A Taste of Donegal 2019. This was the busiest day by far for people coming to enjoy a unique lunch and ice creams by the pier.

Exhibitor Awards were presented in recognition of the outstanding efforts made by producers and food stands all weekend. The Best Product of A Taste of Donegal was awarded to Atlantic Treasures for their maple smoked mackerel, with Spoonful Botanical and Red Dog Sea Salt as runners-up.

Tribal Foods from Athenry won Best Stand of 2019 and the highly commended runners-up were Symphonia Gin and Simply Inish.

As things wrapped up on Sunday evening, co-Chairperson of A Taste of Donegal Ernan McGettigan spoke to Chef Brian McDermott about his recipe for success:

Catch up on the entire festival on the Donegal Daily Festival Blog at: https://www.donegaldaily.com/2019/08/20/live-the-full-menu-a-taste-of-donegal-food-festival-2019/

A Taste of Donegal: A delicious success was last modified: August 27th, 2019 by Rachel McLaughlin