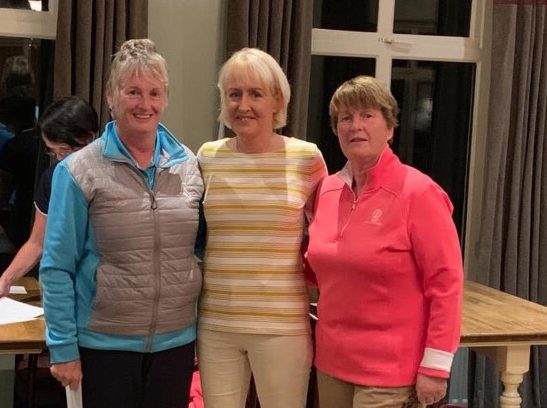 Margo Birmingham was 3rd with 75 net. Maureen Sweeney won the Front 9 with 35 net and Vera Kearney won the Back 9 with 36 net.

On Tuesday 13th Charlie Davis Farm Shop sponsored the V Par competition. Not everyone is a fan of this format but Anne Cannon had no bother playing to her handicap winning with a level score on a bot from Grainne Hines. Bridie Gildea was 3rd -1.

Elaine Russell won the Front 9 +3 while Junior Girl Sarah McBrearty won the Back 9 +1.

The Little Angels Open was on Thursday 15th and this very worthy cause was hugely supported by locals and visitors alike, 67 ladies in all played and it was Cynthia Fuery who took the honours winning with 35pts. Mary Beth McBrearty was runner-up with 34 pts.

Mr. President also kindly sponsored a 9 Hole competition which was won by Agnes Wiseman with 17 pts.

As the evenings start to draw in an 18 Hole Competition sponsored by Browns on the Green will be played on Sunday 1st September – book online. If this initiative is well supported it may be a feature of the Autumn golfing fixtures.

The club matchplay is underway and ladies are reminded to have preliminary round matches completed by August 30th.

The September Medal will be played on Tuesday 3rd September.

Finally, Lady Captain Angela Bradley invited ladies to make a donation if they so wished to her chosen charity, the Donegal Hospice on Lady Captains Day which resulted in €785 being raised.

The cheque was handed over to Kathleen Harkin on behalf of Donegal Hospice.

Your generosity is much appreciated and a wonderful gesture by our Lady Captain.