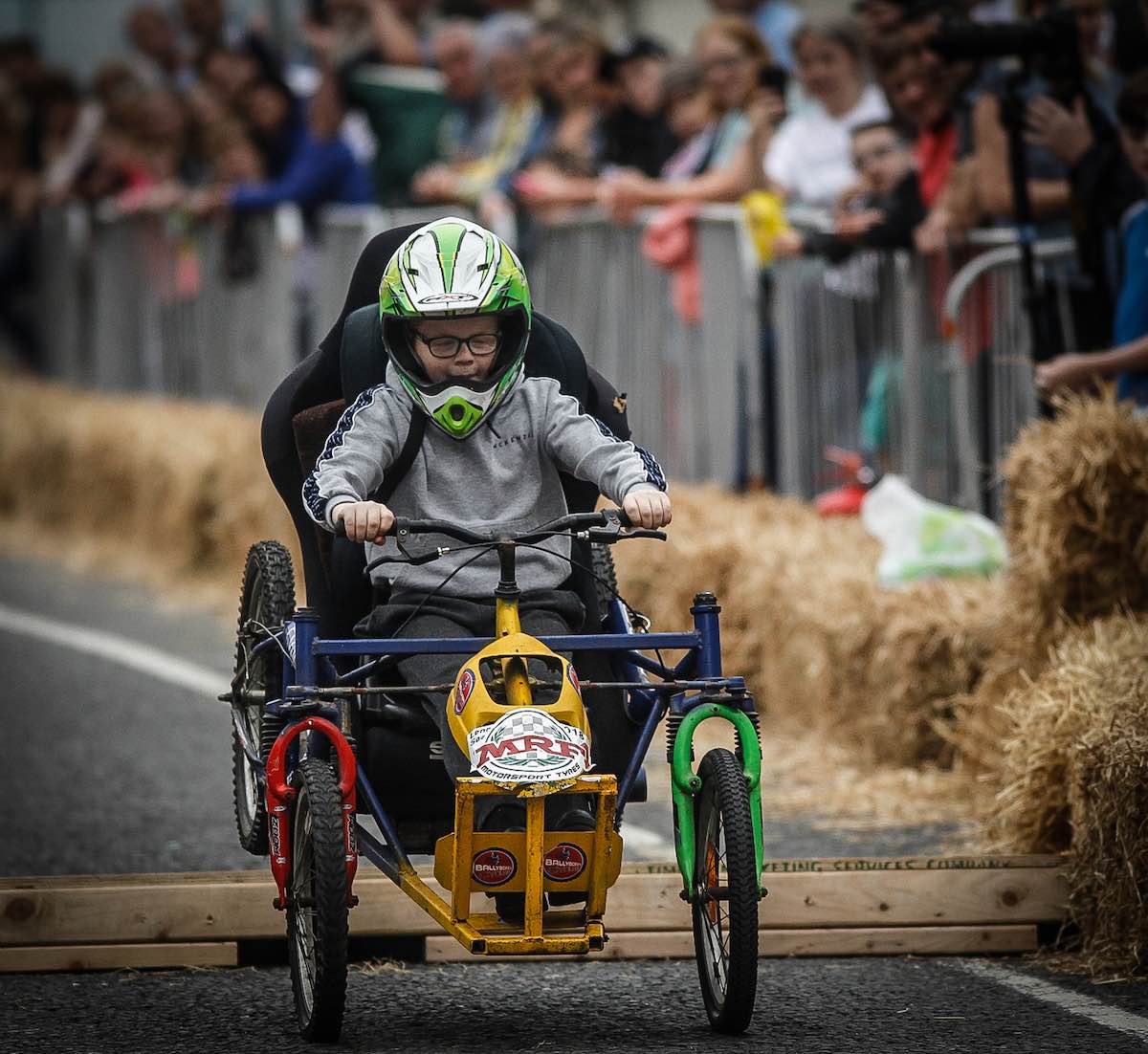 As the school doors reopen at the end of the summer break pupils will return to normality and settle down for the incoming term.

And as it is the norm a teacher will ask their pupils to write an essay on anything special that they did for their summer holidays.

One pupil going into his final year at Lurgybrack National School will gaze out the window and smile.

You only had to take a look at the body language of young Sam Gorman as he stepped down through the makeshift pit lane on the Port Road shortly after 1pm on Sunday.

One of his fans called over to him from the improvised grandstand of the Four Lanterns steps outside the fast-food takeaway and his pit crew made up of his sister, cousin and uncle Seamus just smiles back.

The Gorman’s were on a mission

Ever since the rumours hit the grapevine that an International Folk Festival was back on the cards in Letterkenny “Gorman Go-karts Racing Team” was back after a 30-year gap. 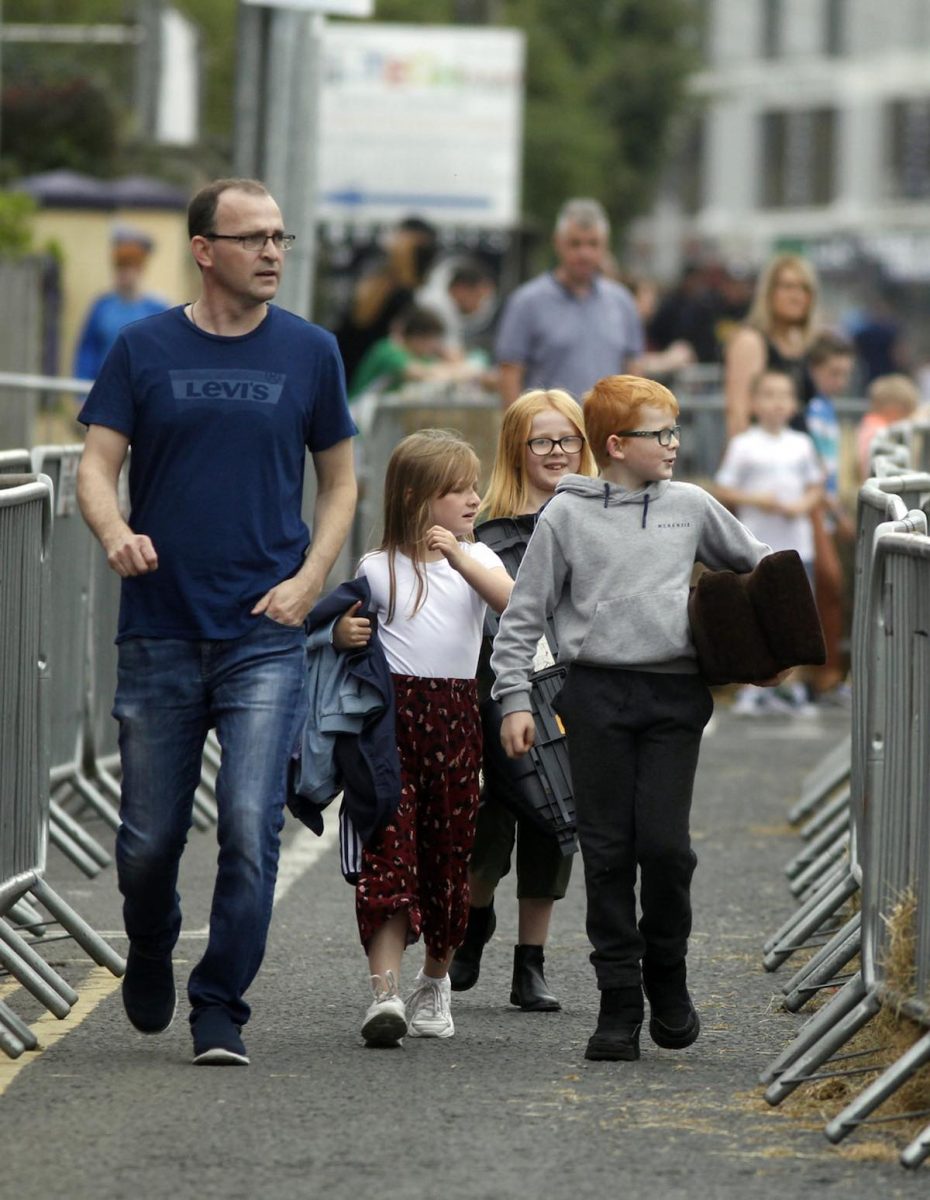 Sam Gorman arriving on Sunday to defend the Gorman title, pictured with some of his race team. Photo Brian McDaid.

A lot of work went on behind closed doors over the summer evenings of 2019 to develop “SG2” which is the code name for the evolution of “SG1” which was developed nearly 40years ago.

Even before the win in 1988 the prototype Go-kart SG 1 which was built by the late Seamus Gorman.

Summer evenings were spent with his children getting ready for many of the Soap Box Derby’s in the International Folk Festival.

Mark Gorman nearly won the event in the early 80’s but was pipped at the post by the late Billy Black and his brother Jason. 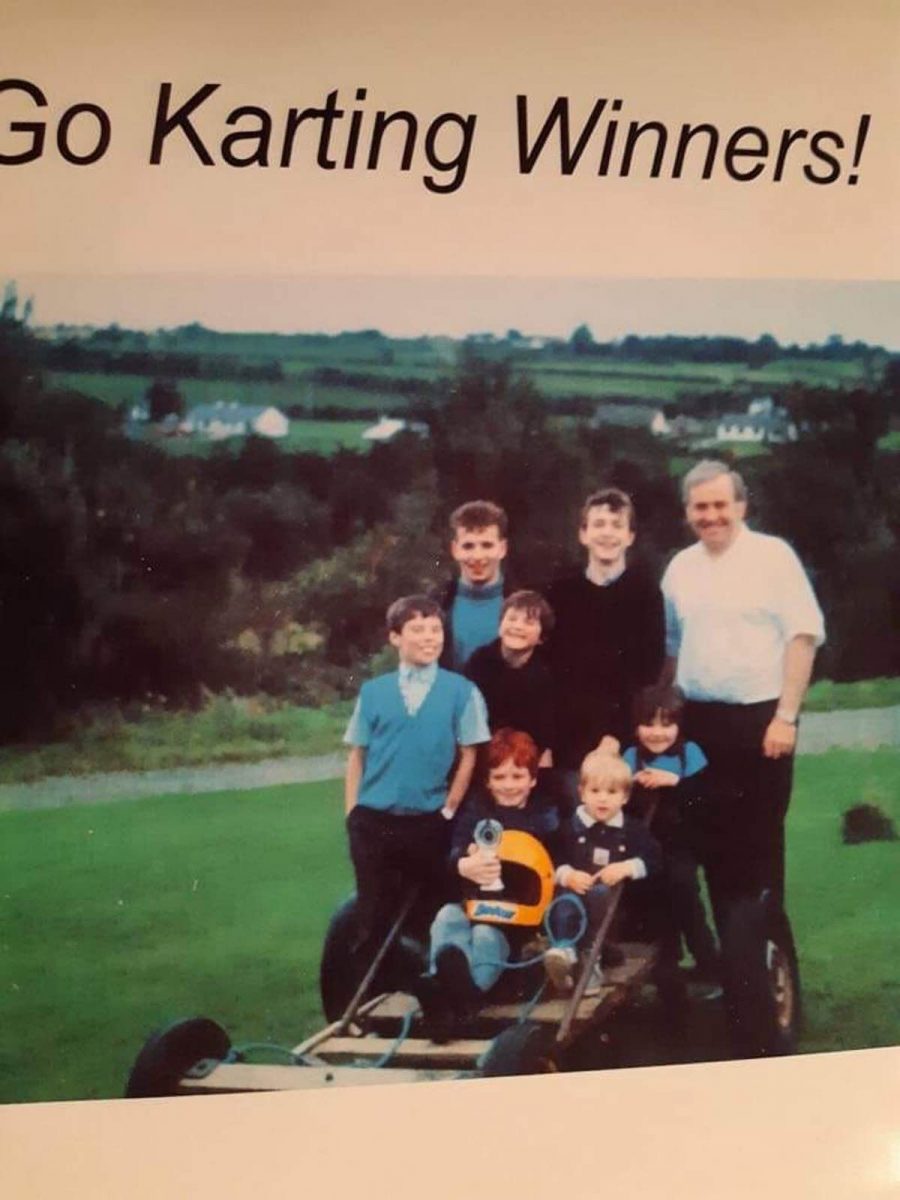 An old photo shows Mark Gorman getting his runner up prize in 1983 for the International Folk Festival Soap Box Derby. The picture was taken in Dillion’s Supermarket Car Park just off the Main Street.

Then in 1988, 30 years ago, Gorman’s homemade Soap-Box was victorious that year when they lifted the title of winner for that race through the streets in that far off summer back in 1988.

An even younger Sammy Gorman only 10 years old was the driver that steered the rather robust wooden racing frame on a motorcar back axle and tyres to victory that year. 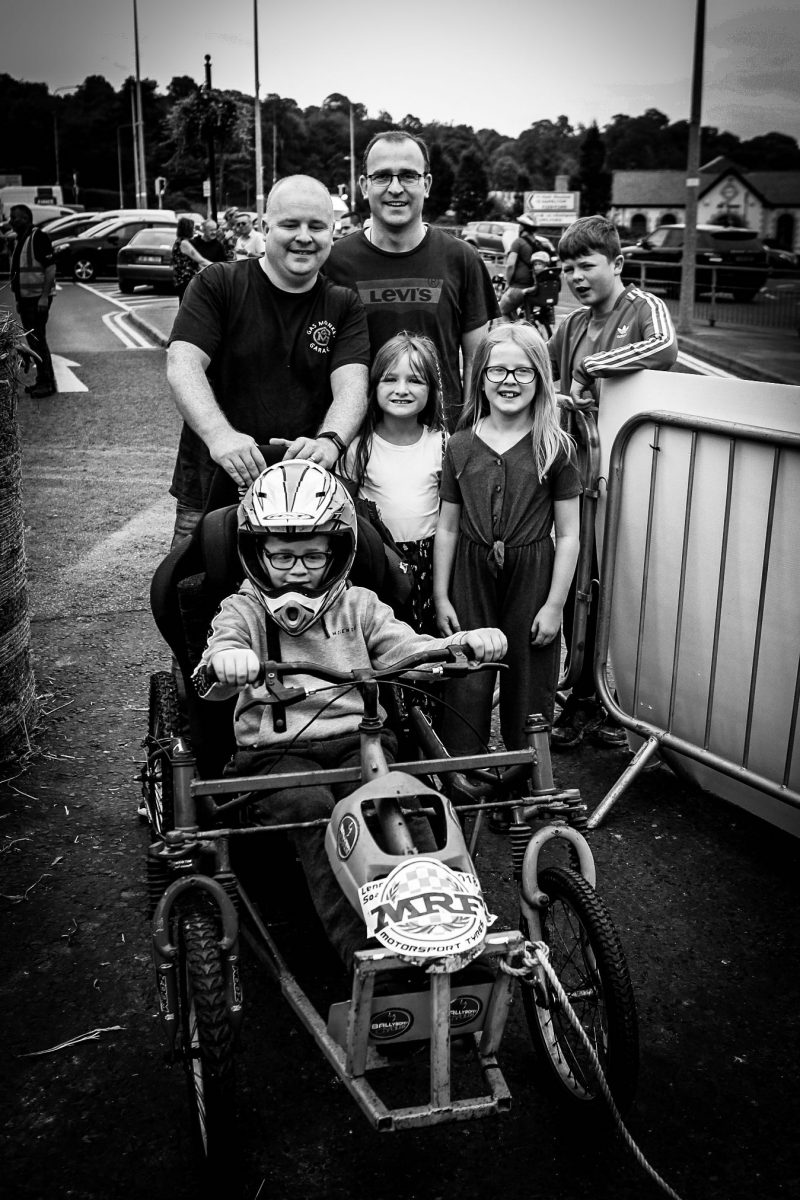 The Gorman Racing Team including driver Sam, Manager Sammy, his brother Seamie and and their team of sons and daughters. Photo Brian McDaid.

31 years on and bragging rights in the Gorman camp were at stake as the title was up for grabs as the international Folk Festival returned to Letterkenny on its 50th anniversary.

Crowds gathered from early morning for the qualifying and tyre testing as timing systems were set in place. 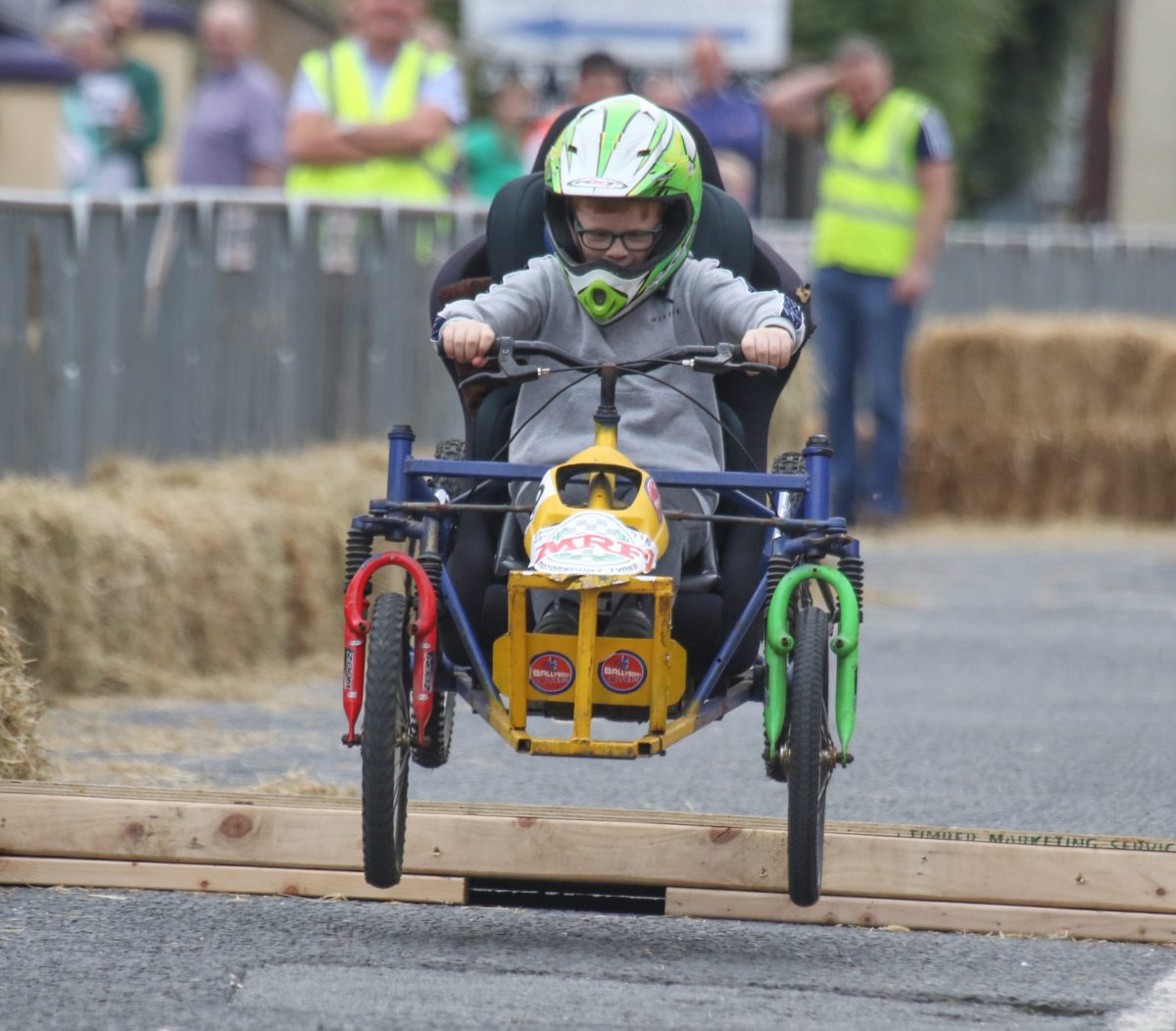 Donegal’s version of Prince Rainier of Monaco, Seamus McGettigan did his presidential duties to flag off the cream of soap-box racing at the starting line at the Golden Grill.

Our own Murray Walker had a distinctive Arranmore Island tone to his commentary as DJ Tubbsey, Thomas Costello filled the street with race commentary.

Racing proper got underway at 2pm as timing beams were lit up, clocks were zeroed, and the race was on.

Barriers on the Port Rd. from the old Golden Grill to Boyce’s Corner were filled as spectators got the best vantage point to watch all the unique shapes and forms that made up the soap-box field for the 50th anniversary grand Prix. 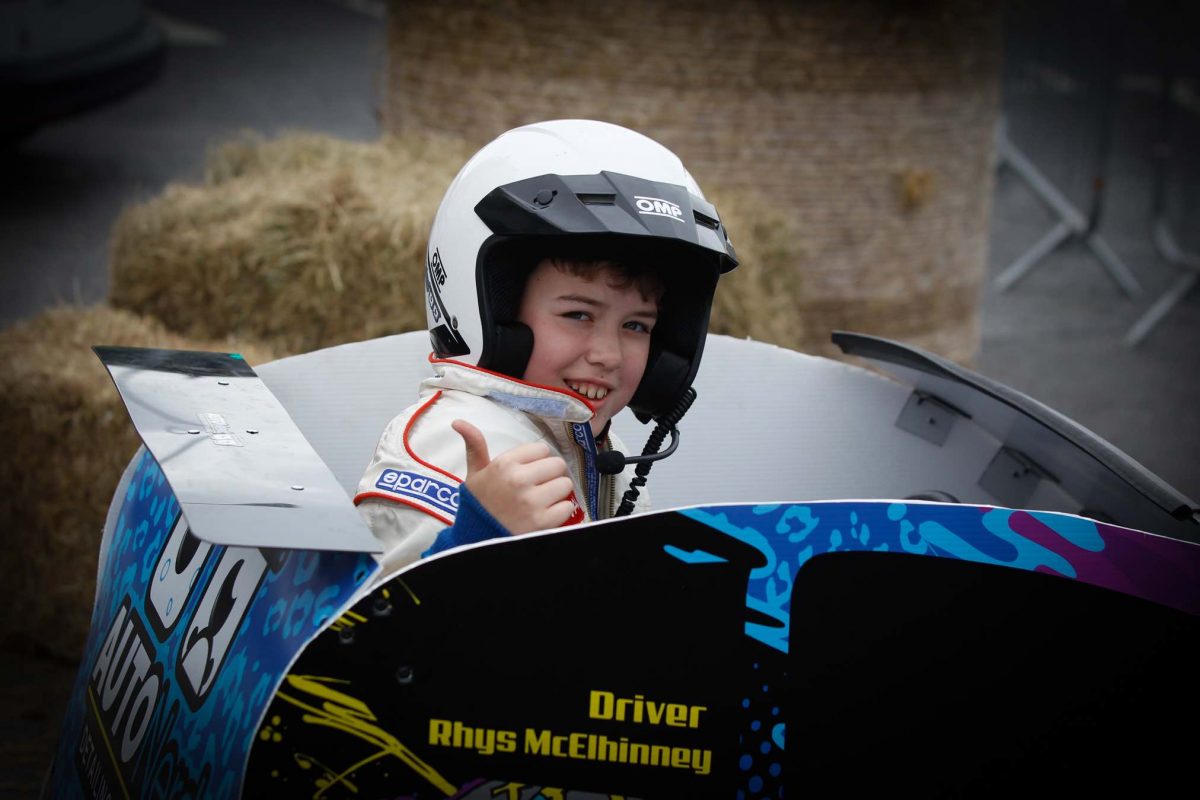 Rhys Mc Elhinney gives a thumbs up at the finish of his run in the Soap-box Derby at the weekend. Photo Brian McDaid.

Chief timekeeper for the event and updates supremo, Shannon Side Sister Sara’s Damien Mc Gettigan was down to hundreds of a second as young competitors like Rhys Mc Elhinney, Oisin Mc Crabbe and young Crossan from the Pulse to name but a few posted times upon the board. 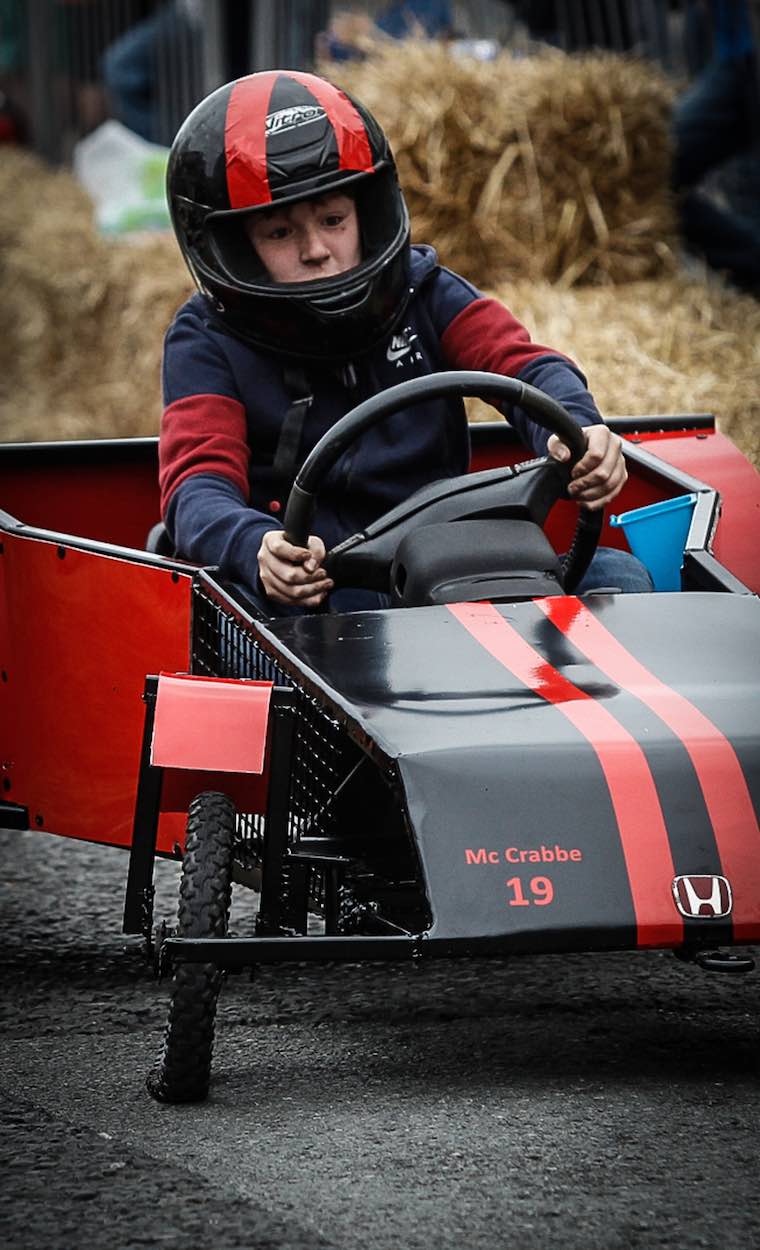 Great work by Oisin Mc Crabbe to recover from this moment on the Soap-Box Derby on Sunday. Photo Brian McDaid.

The High centre of gravity of “SG2” Soap Box of 12-year-old Sam Gorman complete with two different colour suspended bicycle forks soaked up all the 2019 track could throw at it.

A very clean driving style of young Gorman was the secret for young Sam to take the baton of champions from his father Sammy who first won on the streets of Letterkenny three decades before.

Sam Gorman takes to the air on his way to winning the 2019 Soap-Box Derby on Sunday at the 50th International Folk Festival. Photo Brian McDaid.

The late Seamus Gorman was a supporter of the Soap Box Derby for years building and designing a Soap Box with Sammy and his brother Mark.

Mark also competed in the Soap Box Derby in the early eighties and had stiff competition with the black family Billy and Jason. Seamus also supported the Donegal Rally while working with Donegal Oil in the 80’s and provided sponsorship to local rally crews from his company Errigal oil in the 90’s. 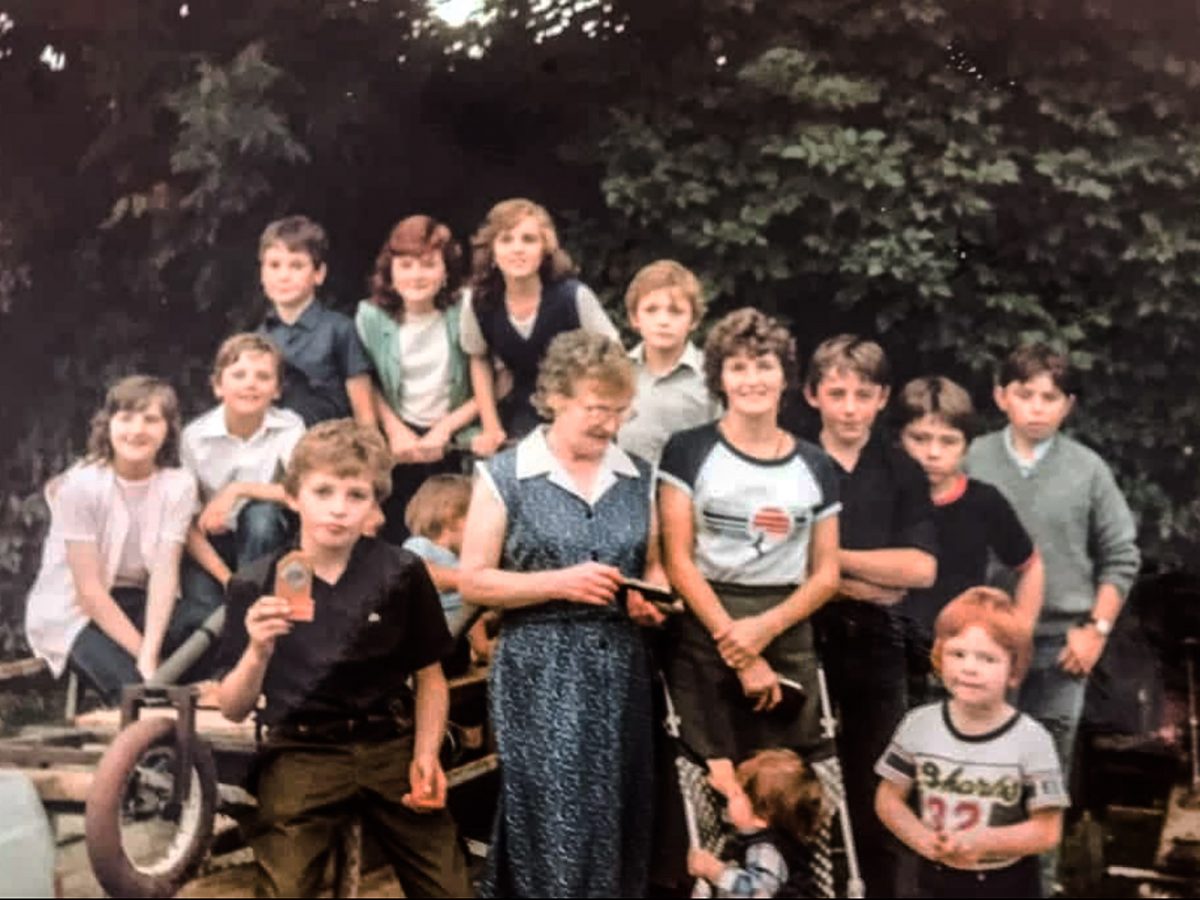 Mark Gorman getting his runner up prize in 1983 for the International Folk Festival Soap-box Derby. pictured was taken in Dillions Car Park just off the Main Street. Included in the picture his mum Monica and granny Katie Holmes in the centre.
Also included Louise Gorman, Ciaran Harvey, Fiona Harvey, Siobhan Harvey, Seamus Gorman junior and a very young Sammy on the right.

Sadly Seamus passed away in 2001 but would have been so proud to see his grandson Sam uphold the Gorman racing tradition with his fine win. Roll on 2020.

As we go to press there are unconfirmed reports that Mercedes F1 Team Principal Totto Wolff has been on the phone to the Gorman household in Co. Donegal this week to see if he could sign the young driving ace Sam Gorman to partner Louis Hamilton in the coming years after his great win in Letterkenny at the weekend. 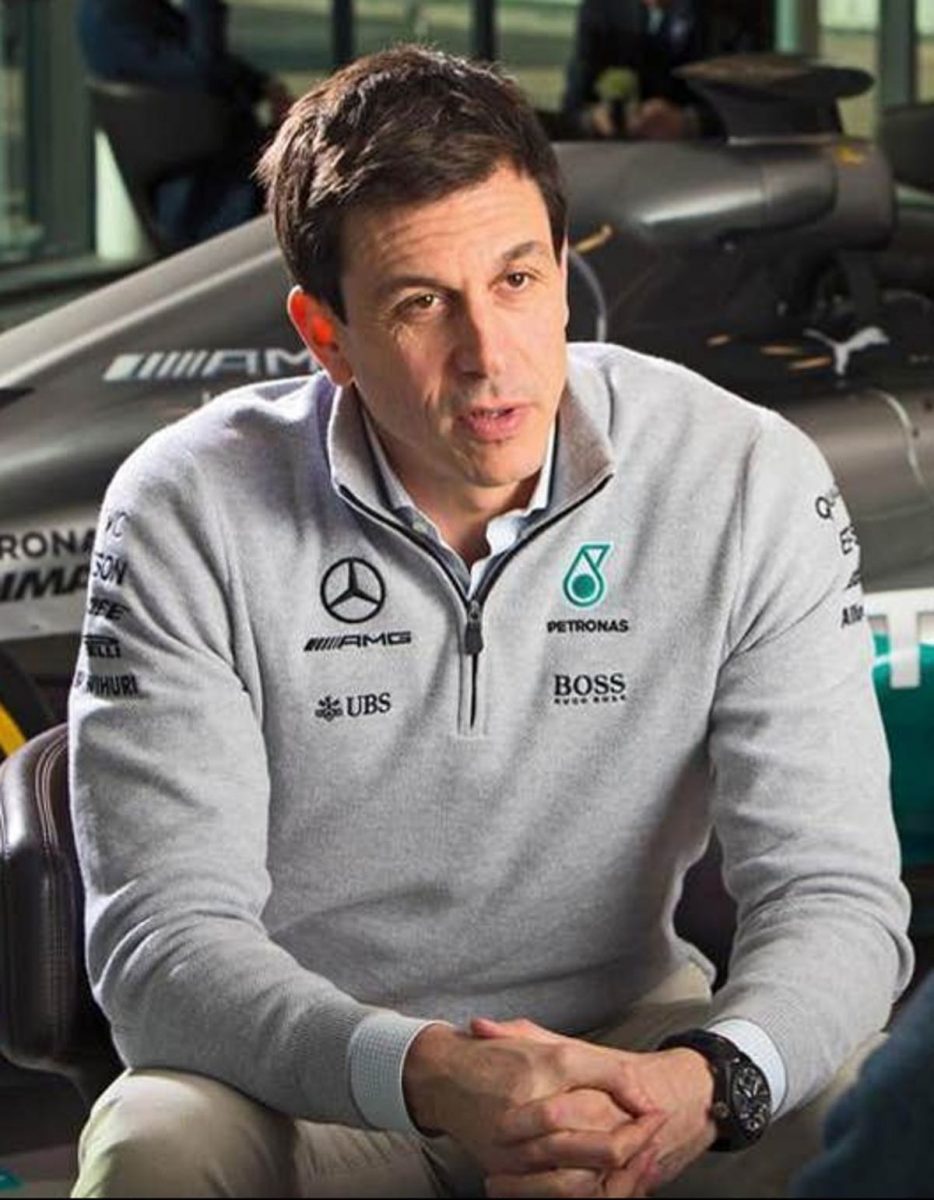 Unconfirmed reports this week is that Mercedes FI principal Totto Wolff is trying to secure a racing contract for the young driving ace Sam Gorman following his win in the Soap-Box Derby in Letterkenny.

Sam’s proud mother Julie, who took the call is believed to have said: “We’ll see”.