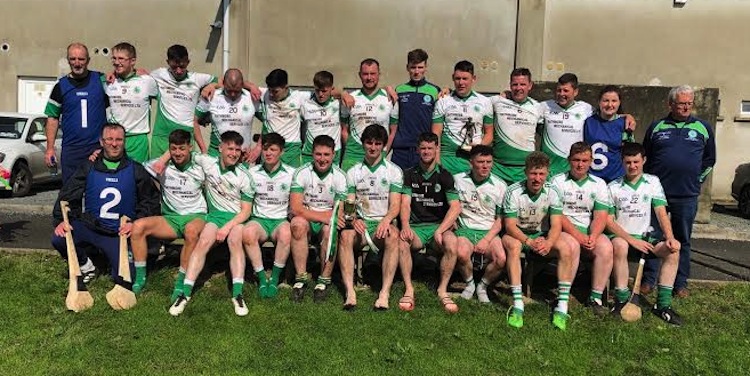 Keenaghan’s goal, on 49 minutes, helped to spur the Ballyshannon men to victory over gallant Carndonagh, who will rue the way this one slipped from their grasp.

An early goal from a penalty by Cathal Doherty had Carndonagh in front for much of the way until the pendulum swung when, with 11 minutes to go, Aodh Ruadh led for the first time.

Twice, the Ernesiders had drawn level in the second half but they hit the front when Keenaghan’s shot skimmed past Carn goalkeeper Fergal Brady.

Conal Sweeney and Ciaran Kilgannon had just popped over points as Aodh Ruadh moved back on level terms.

Carn were left irate when, just before Keenaghan’s goal, they were denied a free. The feelings were compounded when Keenaghan struck gold to put Aodh Ruadh on their way to a first JHC title since 2002.

Kilgannon, Oisin Rooney and Keenaghan all hit points late in the game as Aodh Ruadh saw it out.

There were just 50 seconds gone when Carn full-forward Feargal Doherty was taken down as he plucked the sliotar from the brightening Letterkenny sky. After a brief delay to allow for treatment to Aodh Ruadh goalkeeper Ryan O’Brien, Cathal Doherty blasted the penalty to the net.

Feargal Doherty, Ryan Davenport and Cathal Doherty, with an excellent free, had Carn 1-4 to no score up.

Out-of-sorts Aodh Ruadh were at sea in the early exchanges, but the Ballyshannon men soon warmed to their task.

Rory Cullen clipped over a par of points in the space of a minute to get them off and running.

John O’Donnell – who once upon a time lined out for the Tipperary minors – and Cathal Doherty, with another free, kept Carn in command, but Aodh Ruadh marched right back into the tie before half-time.

A brace of Rooney frees bookended scores by Keenaghan and Kilgannon as Aodh Ruadh came to within a goal with a four-point spree in as many minutes.

Carndonagh have fielded a senior team this year for the first time since 2005, but the Inishowen side – backboned by Donegal senior ace Pádraig Doherty – reached the decider at the first attempt and they led 1-6 to 0-6 at the short whistle.

Rooney drilled over two more in the opening five minutes of the second half as Aodh Ruadh narrowed the margin to a point.

Kilgannon levelled before Carn were incensed when, just as Feargal Doherty was batting to the net, the referee blew for a foul on McCormick. O’Donnell pucked wide from the free, spurning a big chance to put Carn ahead again.

Cathal Doherty got his angles right with a free to inch Carn in front and Paddy Monagle, following a fine Carn move, put two in it.