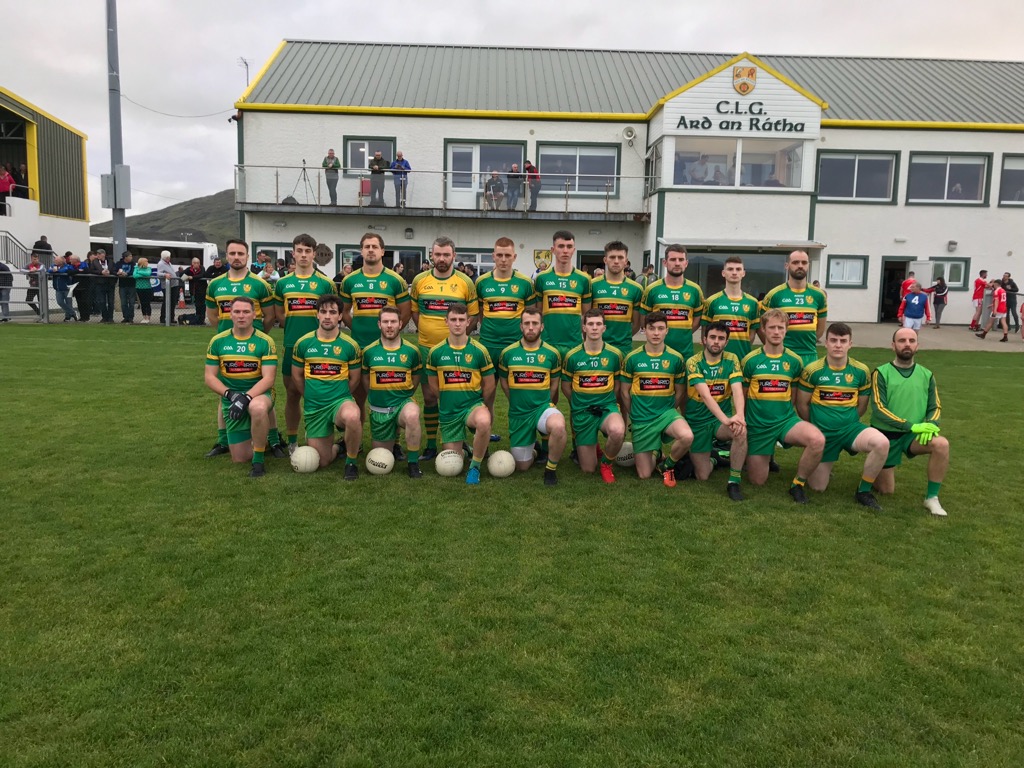 St.Michaels too strong for Ardara in Group A opener

AN INCREDIBLE night in Kentucky saw St Michael’s produce a 22-point turnaround to shake off a terrible start and claim a 14-point win over Ardara.

By Charlie Collins at Pearse Park

What an incredible first-half we had at Pearse Park – a black card in the opening minute, two Ardara goals in the 6th and 7th minutes and an eight-point lead from the home team after seven minutes  became a eight point deficit at half-time.

Ardara hit the ground running and scored three points in three minutes, two from Niall McCrossan and one from Johnny Sweeney.

St.Michaels had lost Michael Gallagher to a black-card for a trip on Conor Classon as the midfielder burst through.

Michael Langan opened the visitors account in the fifth minute but well-taken goals by Robbie Adair and John Ross Molloy inside a minute had Ardara eight points ahead in the 7th minute 2-3 to 0-1.

They wouldn’t score again until the 30th minute as St. Michaels finally hit the go bottom to hit 3-09 without reply.

Andrew Kelly and Colin McFadden added points and then after a super move Christy Toye unselfishly set up Michael Langan to palm home another goal in the 15th minute and the visitors were ahead 2-05 to 2-03.

The one-way traffic continued as yet another poor Ardara kick-out was pounced on and through went Andrew Kelly to hammer the ball to the net. Langan, Colm McFadden, Kelly and Colin McFadden all added points as St.Michaels added 3-09 without reply to lead 3-10 to 2-3 .

Robbie Adair and Niall McCrossan got late points for the home team to leave it 3-10 to 2-05 at half-time.

The second-half was certainly less dramatic as the teams exchanged points, but St. Michaels in control as they added seven to Ardara’s four with Oisín Langan getting in on the scoring act with two from play, before they added a fourth goal when Daniel McLaughlin set up Edward O Reilly to Palm to the net to make it 4-17 to 2-09.

McCrossan added one for Ardara but Kyle rounded off an impressive St.Michaels performance with a fine score and ended a game which saw a 22-point turnaround from the seventh minute until the end – remarkable stuff without a doubt.

St.Michaels too strong for Ardara in Group A opener was last modified: September 8th, 2019 by Chris McNulty
Facebook0Tweet0LinkedIn0Print0