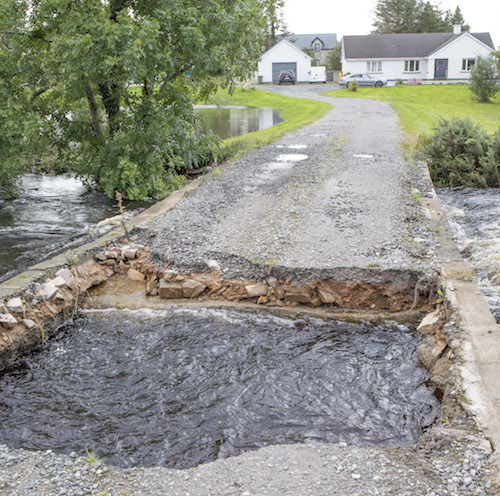 Deputy Pat the Cope Gallagher has lashed out at the Government’s total inaction and non-responsive approach to recent flooding in west Donegal.

The Donegal TD’s concerns come following heavy rain at the end of last month that severely damaged infrastructure – including a bridge that leads to a family home in Gaoth Dobhair.

“I am particularly referring to both the Senior Minister and Minister of State for the Gaeltacht, neither of whom have visited the Donegal Gaeltacht since taking office apart from a fleeting appearance at the Cabinet meeting held recently in Gleann Colm Cille,” said Deputy Pat the Cope.

“The callous, cold and non-responsive reply by the Government to calls for assistance to deal with the aftermath of the flooding only reinstates an already well-held belief that if you are from Donegal you simply do not matter to this Government.

“This contrasts greatly with the response of the then Government in 2009 when on that occasion a cross-departmental response in conjunction with Donegal County Council was assembled within 24 hours .

“But, this Government simply does not respond to calls of assistance particularly as it seems if you are from west Donegal,” added Pat the Cope.

“In my years in politics,  I find the attitudes of some of the Government Ministers astounding, to say the least, this is a Government of indifference towards the people with an overarching attitude of they could not care less about the plight of ordinary people of west Donegal,” stated Pat the Cope.

“I again challenge the Ministers in office and most especially those within departments that have a responsibility to assist in times of natural disasters and the Minister of State for the Gaeltacht Sean Kyne, to immediately act and put in place a response to the recent west Donegal flooding.

“Many areas suffered damage, with road and other infrastructural damage, drainage destroyed and access to areas cut off; this requires funding to be put right and to be fully reinstated,” added Pat the Cope.

“The people of west Donegal deserve the same response as was given to other areas of Ireland after flooding – but, to date that has not happened in this case.

“This is a Government of much talk but followed as always by total inaction, the silence is deafening from the Government and their response is non-existent.”