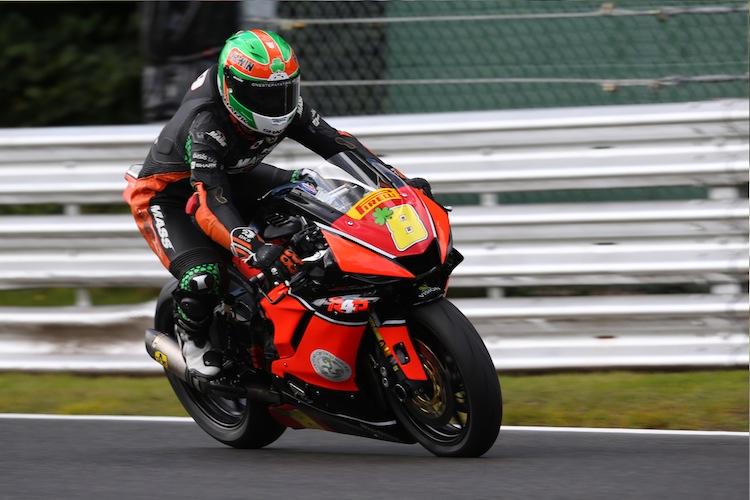 CAOLÁN AND Rhys Irwin returned to British Superstock action for a rare double header weekend as the British Superbike Championship made it second visit of the year to Oulton Park.

It was a mixed weekend for the Irwin Racing boys and their Ready 4 Racing team as an injury for Caolán interrupted his recent momentum while Rhys came away happy with his progress on only his second Superstock outing.

Having comfortably run at the front throughout the weekend, Caolán, the older of the two Donegal brothers, left the Cheshire track disappointed as he picked up a knee injury in a race one crash, which then caused him to drop off the pace in race two.

Rhys continued to build his experience as he undertook his second weekend in the championship, having swapped from the Moto3 Standard class

Following on from a run of strong performances at recent events, including a maiden win at Cadwell Park, Caolán was at the top of the time sheets from the first session at Oulton, taking second place in both practice sessions and then missing out on pole position for the first race by less than a hundredth of a second.

At the start of race one Caolán got away well and was at the head of a group of five riders who were battling hard for the lead.

A very robust pass by one of his rivals pushed the Irish rider wide on lap three, dropping him to the back of the group but he was quickly back up to fourth and challenging once again. Just as he positioned himself to get back into the podium positions, a small mistake at the start of the fifth lap saw the Kilmacrennan man crash out of the race, injuring his knee in the process.

Having rested the injury overnight Caolán started Sunday’s race in eight place but following the warm up lap knew he was in trouble.

A good early part to the race saw him rise to fifth but as his knee pain increased Caolán was no longer able to push hard and dropped back to eventually finish twelfth well of his initial pace.

Rhys Irwin joined his brother in Superstock 600 at Oulton Park, for his second outing in the class, with the aim of building his experience and he performed well in practice to take an impressive seventh place in the second session. A mechanical fault in qualifying meant he did not complete a flying lap and had to start from 28th and last for the opening race.

A strong run in the first race saw him climb to 20th by the flag with a lap time quick enough to move him three rows up the grid for the second encounter.

Despite a run-on at the chicane in the second race, which dropped him to last, he once again improved his lap times to climb back up the order and match his race one finish.

Speaking after the second race a disappointed Caolán said: “The weekend started off incredibly, I was second in every session and just lost out on pole by 0.003 of a second.

“Unfortunately while fighting for the lead on Saturday I went down and injured my knee, which I then played down to myself and everyone else.

“Today’s race I was in fifth and was matching the leaders pace before my injury became too much and I had to adapt my riding style just to finish, which I eventually did in twelfth. I feel really bad for all of the team and my sponsors but I have a month off now to get myself right and bounce back at the next event in Donington.”
Rhys’s verdict on the weekend was: “It was a good weekend and I’m really happy with the progress we have made. This is a very competitive series and I was really in at the deep end.

“I know when I get more time on the bike and get it set up more to my liking that there is a lot more to come and I’m looking forward to making further progress next time out.”
Both riders will return to action at Donington Park in early October with the aim of continuing their British Championship progress.