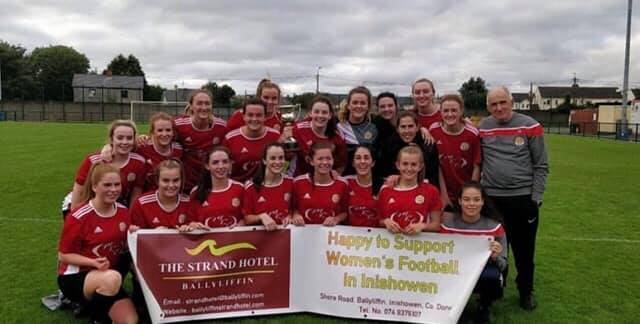 EMMA DOHERTY was the hat-trick hero as Illies Celtic defeated Greencastle FC in the Inishowen Cup final on Saturday evening.

Doherty’s treble and goals by Danielle Doherty, Paula McGrory and Alana Doherty sealed a big win for John Doherty’s side.

McGrory gave them the lead after five minutes when she reacted after an Illies corner was turned onto the crossbar.

Greencastle responded and a good run by Niamh Hegarty was halted by a fine save by Illies ‘keeper Aoife McColgan.

Alana Doherty added to the Illies score before a good ball over the top then led to McGrory shooting just wide from 15 yards.

A shot from 30 yards by Allison McGonagle was well saved by Georgia Rudden in the Greencastle goal.

Niamh McDonald pulled a goal back for Greencastle, but Emma Doherty completed her hat-trick when she was slipped through by Alison McGonagle. Emma Doherty might have had a fourth, but a superb effort came off the crossbar.

Illies added the Inishowen Cup to the Ulster Cup they collected two weeks ago with a big win over Fanad.