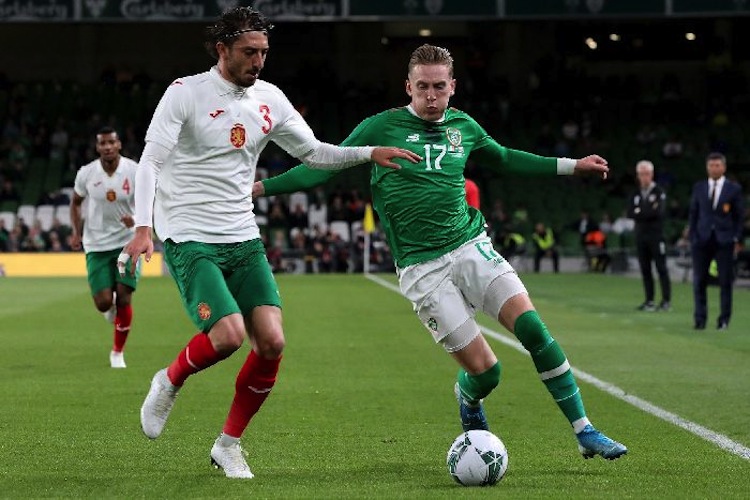 RONAN CURTIS made his full debut for the Republic of Ireland in tonight’s 3-1 win over Bulgaria.

Curtis won two caps last year as a substitute, but the Portsmouth player was handed a start by Mick McCarthy for tonight’s friendly at the Aviva Stadium.

Curtis played a big part in Ireland’s opening goal 11 minutes into the second half.

The St Johnston man’s shot was saved by Hristo Ivanov, the Bulgarian goalkeeper, but Alan Browne tapped home after Scott Hogan seized on the rebound.

Late in the first half, the former Derry City attacker’ almost caught Ivanov out, with Hogan just failing to get a touch and the ‘keeper managed to make a good save.

Ireland’s set-up wasn’t favourable to Curtis’ style, but he grew into the game.

Ivelin Popov equalised from Bulgaria in the 67th minute from a penalty.

Curtis almost got his head on a corner late in the game, but Kevin Long did head home from a few yards behind.

Curtis was withdrawn at that point and James Collins added a debut goal for Ireland’s third.