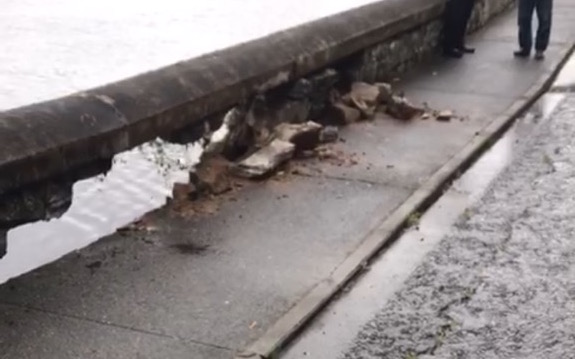 Calls have been made for a full safety check on the river wall on Ramelton’s Shore Road after it partially collapsed last week.

A large section of the wall was swept away by high tides on Wednesday last, leading to fears that more sections and parts of the nearby road could also erode away.

An emergency council motion was raised by Cllr Ian McGarvey on Tuesday asking for the issue to be urgently addressed.

Cllr McGarvey said that the entire wall was suspect, the wall is too low and barricades in the area are a present danger.

“Don’t tell me youngsters won’t be up at the barricades,” Cllr McGarvey warned the local authority.

Donegal County Council is due to send Piers and Harbour staff to Ramelton this week to begin reinstating the collapsed wall when tides are more favourable.

The repairs are expected to take a number of weeks.

Cllr Liam Blaney also questioned the height and safety of the wall and called for checks on the entire structure.

“It is a very dangerous situation,” Cllr Blaney said.

The council said the existing wall will continue to be monitored.