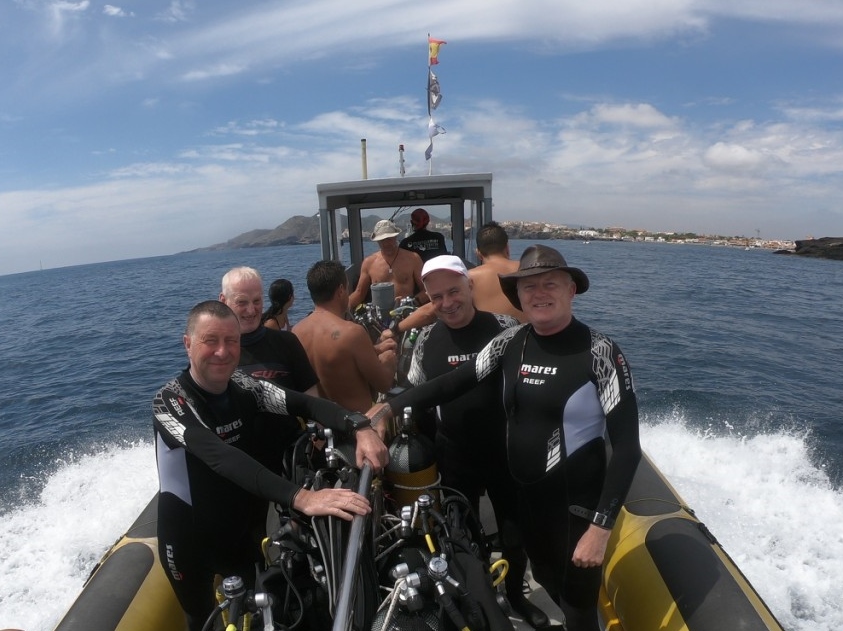 Sheephaven divers were busy last week with dives abroad during the week, followed by the Annual John Mc Garvey Fin Swim on Saturday and finally a dive back in Donegal on Sunday morning.

The club divers were in Spain for a week of warm water diving in the Mediterranean, at the marine park just off the port of Cabo de Palos.

The divers were the guests of club member Lee Downey, who organised the travel out to Alicante, including transportation, accommodation and the all-important diving with the Mangamar Dive Centre in Cabo de Palos.

The flights were direct from Belfast to Alicante with Ryanair and thankfully were incident-free, except for the lighting storm on arrival to welcome the divers to sunny Spain.

The divers conducted seven dives during their stay, all in the marine reserve which is centred around the island of Islas Hormigas and principally on the sea pinnacles of Bajo del Piles and Bajo de Debro.

Maximum depth was around 20 meters, with most dives taking up to 50 minutes surface to surface, while in-water visibility was generally very good at around 15 metres horizontally.

Marine life was both abundant and diverse, with shoals of Barracuda and Goatfish present, large numbers of excellent specimens of Groupers and on a number of occasions on the surface Flying Fish.

Hard coral has begun to become established in the marine reserve, with examples of Gregorian coral observed and on the other size scale the divers observed some small Nudibranchs.

All the scuba gear was rented from Mangamar and the boat dives were mainly on their 16-metre rib Kaiser, equipped with twin boarding ladders on the stern.

All the rented equipment, facilities and boats were in good order, while the staff were both pleasant and knowledgeable, which made the diving memorable for all the right reasons.

On Saturday afternoon Sheephaven divers, along with Ross Snorkelers and Inishfree Divers, conducted the Annual John Mc Garvey Memorial Fin Swim, which once again was from Burtonport to Arranmore.

The swim was timed to coincide with the strongest part of the ebbing tide in the Black Hole, the channel between Rutland and Inishfree Islands and the swimmers were across to Arranmore in 1 hour 35 minutes.

On arrival at Arranmore, the Mc Garvey family were on hand to welcome the swimmers ashore and particularly acknowledge the three youngest members from the Mc Elroy and Houston families.

The club would like to thank all who towed and manned the boats, particularly the Early family, as well as the refreshments on the island provided by Jerry Early.

Finally, club diving activities were rounded off on Sunday morning with a challenging little dive at Melmore Head, were the holiday diving of Spain was put in its place with 16 degrees Celsius water temperatures and air temperatures in the mid-teens.

In-water visibility was no greater than 10 metres while depths of over 25 metres were achieved for dive times of over 45 minutes, but it was still great to be back diving in home waters.