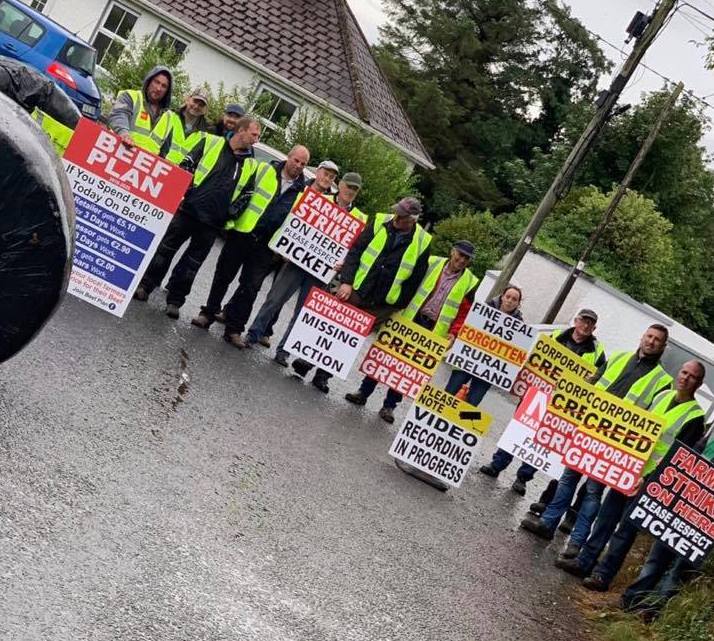 An agreement to the end beef crisis has been reached after marathon talks over the weekend, the agriculture minister has confirmed.

The deal includes an immediate increase in prices for farmers and reform of the Irish beef sector.

The agreement withdraws all legal proceedings against farm organisations and individual farmers.

Dozens of farmers in Carrigans joined the nationwide protest last month outside the Foyle Meats factory.

All parties to the agreement agreed to work to end blockades and protests at meat factories.

Cattle slaughtering at blockaded plants has been halted during the talks process.

Some retailers have experienced beef supply issues and several large processors are struggling to meet export contracts, as a result of the protest.

The deal will see the current bonus for 30-month cattle increase from 12 to 20 cent per kilo.

A new bonus for steers and heifers aged 30-36 months, of eight cent a kilo, is to be introduced.

And a new bonus is also to be introduced for some O grade cattle, the 12 cent a kilo bonus will benefit dairy farmers in particular.

A new Beef Taskforce is to be established. It will examine the beef industry and will be independently chaired.

An independent review of price composition in the supply chain is also to be commissioned.

In a statement, the Minister for Agriculture Michael Creed said: “I wish to thank all participants in this process for their contribution towards agreeing a way forward for the Irish beef sector.

“I hope that this agreement will prove to be a first step in fostering stronger partnerships in this critical sector for the Irish economy and for rural Ireland.”

In a statement released this afternoon, MII said: “We recognise the challenges all involved in our industry face. The agreed package contains significant positive financial initiatives by MII members, in areas of specifications, bonuses and supply chain transparency.

“The agreement requires that all protests and illegal blockades cease immediately so that normal processing can recommence, employees can return to work, farmers can sell their animals, and efforts can be made to rebuild customer confidence.

“This has been an extremely damaging episode for all stakeholders in the beef and sheep sectors. It has occurred at a time of significant and continuing challenges in the EU beef market.

“It is of particular concern given the closeness of Brexit and the major implications that a no-deal outcome presents for our sector,” said the statement.