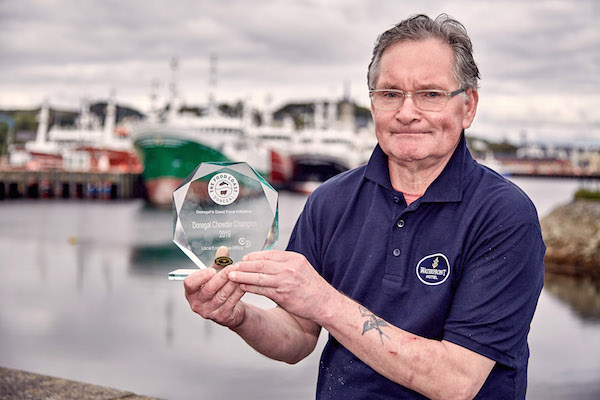 Dungloe-based chef Joe Clinton will be hoping his famous seafood chowder can land a national crown for Donegal again next year when he heads to Kinsale to represent the county in the All-Ireland Chowder Cook-Off.

Joe, who is head chef at the Waterfront Hotel in Dungloe, won the Donegal Chowder competition at the Hooked Festival in Killybegs last week, just pipping Gary and Linda Boyle from Fusion Bistro in Killybegs for the coveted Donegal title.

Donegal has enjoyed tremendous success at the national competition in recent years and Joe says he can’t wait to go to Kinsale to compete for the title.

“I was delighted to bring my personal Seafood Chowder recipe to the  Killybegs Hooked Festival Chowder Competition on behalf of the Waterfront Hotel.  We are very proud of our chowder and it was amazing to win against such tough competition from within the county,” said Joe.

While the Waterfront Hotel chef will have one eye on the national finals in Kinsale, he has urged local chefs and restaurants to mark the Donegal contest in their diary for 2020 and to continue to engage with Food Coast Donegal whose support is vital for the Donegal finalist in Kinsale.

Michael Tunney, Head of Enterprise in Donegal says The Food Coast is about helping businesses to work together to highlight the developing food culture in the county.

Participants at the recent Donegal Chowder contest at the Hooked Festival in Killybegs.

“The Food Coast Initiative gives new and existing food businesses in Donegal the opportunity to connect with fellow businesses while building the profile of Donegal. The ambition for the Local Enterprise Office is to encourage new food start-ups and the development of established businesses.

“We already have a strong network of businesses on board and we’re inviting anyone with an interest in the county’s food sector to join, from start-up businesses to established primary producers, farmers, manufacturers, distributors, retailers and restaurateurs.”

Food businesses interested in finding out more about the Food Coast or seeking to join Donegal’s Food Coast Network should contact Margaret Campbell at the Local Enterprise Office 074-9160735 or visit their website www.localenterprise.ie/donegal