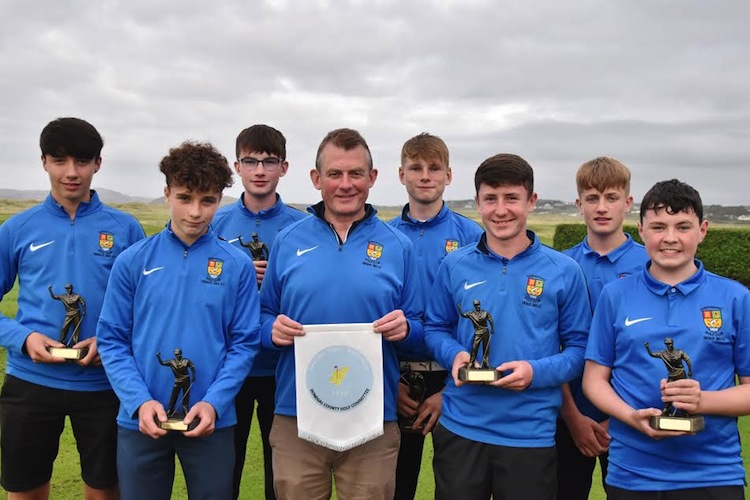 Dunfanaghy Golf Club retained the Donegal Youth Matchplay Championship after a thrilling Sunday of golf against Ballybofey and Stranorlar.

The first leg on Saturday the young Finn Valley boys, with an average age of 13 years, put in a great performance.

Barry McMenamin and Patrick Carr led the way winning 3 and 2 followed by Joey O’Hora and Shane McBride winning by one hole on the 18th and finally Oran McBride and Sam McGlinchey winning the final match 5 and 3 to make it 3-0 and 9 holes of a difference.

Trailing 3-0 and by 9 holes from Saturday’s away leg at Ballybofey, the Dunfanaghy boys knew they had a huge job ahead of them to retain the cup.

Leading from the front the Ulster Interprovincial players Darcy Hogg and Luke Kelly playing off 1 and 3 handicaps respectively played some superb golf, shooting 9 birdies between them, to close out match number 1, 4 and 3.

The match number three pairing of Tom McClintock and Lucas Wood played great golf to close out their match 5 and 4.

With two matches in and holes even it was left to the pairing of James T Sweeney and Conor Hanna to try to get the crucial win. A great eagle from Conor on the 10th was the turning point in a very tight match.

They were able to hold onto their slim lead down the stretch, closing it out on the 17th to clinch the tightest of wins winning by two holes overall.

At the presentation Edward Harvey the convenor paid tribute to both clubs on the standard of golf and especially the great display of sportsmanship in the final.

He also praised the great work being done for the youth in both clubs – especially the number of volunteers who are willing to help. The great work in coaching by the professional Seamus McMonagle who was involved in both teams.
Team captain James Sweeney Senior was delighted with the performance of his team, but also paid tribute to the young and talented Ballybofey team.

The match was played in the upmost sportsmanship and friendship as Barry McMenamin pointed out and was a great advertisement for youth golf in Donegal.