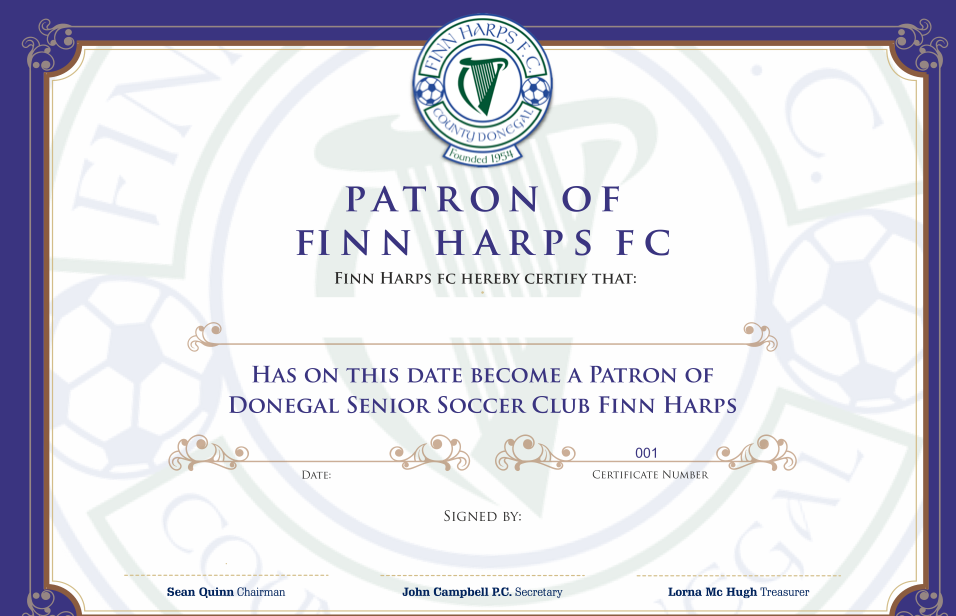 The Patrons of Finn Harps is a special fundraising venture launched by the Club due to the unexpectedly, difficult financial situation that has occurred because of just two home games in the last nine weeks.

The last home match, a fortnight ago, against St. Patrick’s Athletic was Harps’ first home game in five weeks.

Ollie Horgan’s side won’t be back at Finn Park now for another two weeks, so to support the squad through this period the club has now launched ‘The Patrons of Finn Harps’.

Harps are inviting subscriptions of a minimum of €100 each to back the Club’s campaign to stay in the League of Ireland Premier Division.

In return that financial support will be acknowledged across all media platforms, website and match programmes for the remainder of the season.

Finn Harps Club Chairperson Sean Quinn is asking for the public’s support with the fundraising initiative.

“Ollie Horgan and the senior squad have really put in a big effort and we’re in a good position to make the play-offs at this stage,” Quinn said.

“But, we have been really stretched by having just two home games in nine weeks. So we need people across Donegal and further afield to back us now and the The Patrons of Finn Harps is an ideal way to be part of our Club.

“Finn Harps, under Ollie Horgan, has been doing really well over the past five years with limited resources compared to most other clubs. We have been promoted twice to the Premier Division and that’s where we want to stay and build a squad that is capable of competing at the highest level in the League of Ireland.”

Those interested in supporting the Patrons of Finn Harps can do so by contacting the list below or any of the Board of Directors. It can also be done by emailing harpspatron@gmail.com. Further names will be added to the list of contacts in due course.