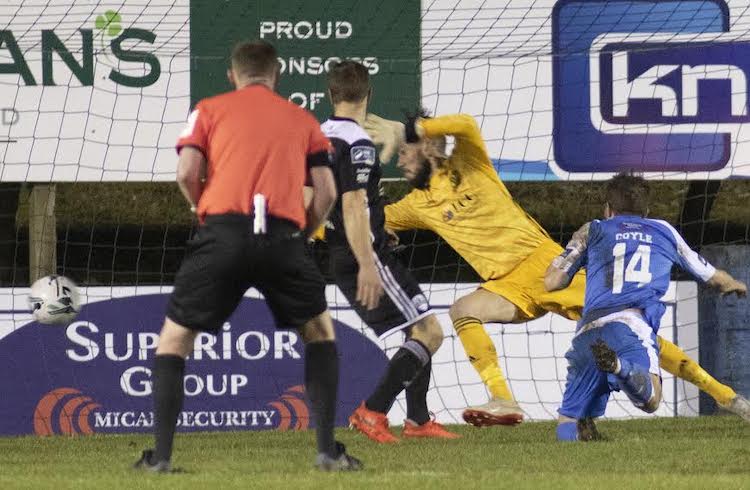 FINN HARPS will be without Keith Cowan and Mark Coyle when they face Cork City tonight at Turners Cross.

Cowan and Coyle are suspended and were absent from the traveling party when Harps headed south yesterday in advance of the game.

Cowan scored the goal in April when Harps drew 1-1 by the Lee, while Coyle bagged a goal in a 4-3 defeat in March (pictured above).

Harps boss Ollie Horgan has rated Ruairi Harkin and Mark Timlin as doubtful for the game with Michael Gallagher and Ciaran Gallagher remain on the long-term injury list.

Harps suffered a 3-1 defeat last Friday at Sligo Rovers and Horgan’s men are five points ahead of UCD in the battle to avoid the automatic relegation position.

“We’ll be turned over by Cork if the same mistakes are repeated as happened in the Sligo game last Friday,” Horgan warned

“Neale Fenn still has the nucleus of the successful side that was there a couple of years ago and will have his players really up for us. They need a result just like us.

“So if we’re not up for it, then Cork will win. We’re in danger of UCD closing the gap more if we don’t get our act together quickly.

“There is only  five points between us now and we have to play UCD in Ballybofey on the 4th of October. We lost to Cork in that 4-3 game in Ballybofey and have drawn against them in the last two matches at Turners Cross and Finn Park. We’re going to Cork looking to get a result.”