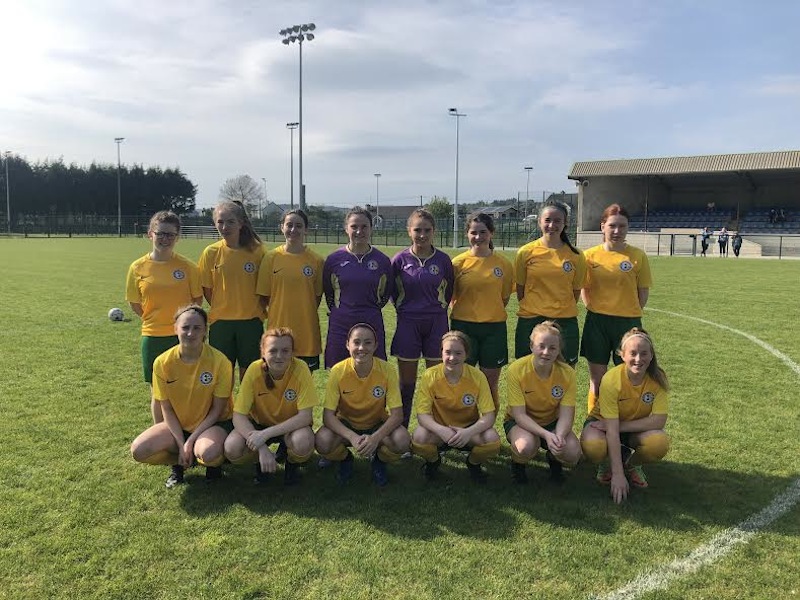 DONEGAL WOMEN’S League secured a historic first-ever win in the Under-17 Women’s National League as a big home victory secured a place in the Shield semi-finals.

Super first-half goals by Ciara McGarvey and Aoife Gallinagh set Donegal on their way, while Aoife Kelly’s brace early in the second half had the home side well in command.

Needing to win by three clear goals to advance, Donegal were rocked back on their heels when Nicole O’Neill scored for the Waves.

For a time Donegal lived dangerously and their goal had a charmed existence, but they overcame some second-half nerves and, in their second season at this grade, Johnny Baird’s team have been rewarded with a first win and seal a place in a Shield semi-final against Athlone Town.

Donegal took the lead in the 18th minute when McGarvey’s delicious effort from the right-hand side deceived ‘keeper Leah Hartigan for the lead goal.

Energised by the breakthrough, Donegal set about doubling the advantage, but McGarvey prodded over the top with her left foot after getting on the end of a cross.

Donegal had a couple of decent openings early on, with Louise Gallinagh cross held by Hartigan after McGarvey and Kelly were denied.

Coilín Hume, who had a solid afternoon at the heart of the home defence, headed narrowly wide after connecting to Aoife Gallinagh’s free kick.

At the other end, Hume held off the advances of O’Neill, who shot wide.

O’Neill had a big chance to put the Dubliners ahead in the opening minutes, but she fired over the top from Finola Doyle’s cross.

Waves’ Emma Downes had a go at an equaliser, but her effort rose too much and the chance was gone.

Downes had the ball in the net, but her effort was chalked out with the offside flag hoisted.

Donegal made it 2-0 on the half-hour as Gallinagh wonderful strike flew to the net from outside the area.

Donegal were full value for their lead and they extended the advantage when Kelly rounded the ‘keeper to tuck home.

Just moments later, Kelly charged down a goal-kick and the ball sprung off her into the net for 4-0.

DLR Waves weren’t going away and Lara Walsh forced a strong save from Scanlon, who was finally beaten when O’Neill steered in from six yards.

Scanlon saved from Downes before McGarvey’s delicate free kick came off the bar at the other end.

The fingertips of Scanlon turned away an ambitious Walsh attempt as the Waves went in search of another, while Niamh Caffery headed inches wide.

The hosts’ hearts were in their mouths when a big opening presented itself to Downes, but she fired over the crossbar.

Donegal’s Aoife Gallinagh was thwarted by Keeper and, with the home side keen for some breathing space, McGarvey drilled into the side netting.