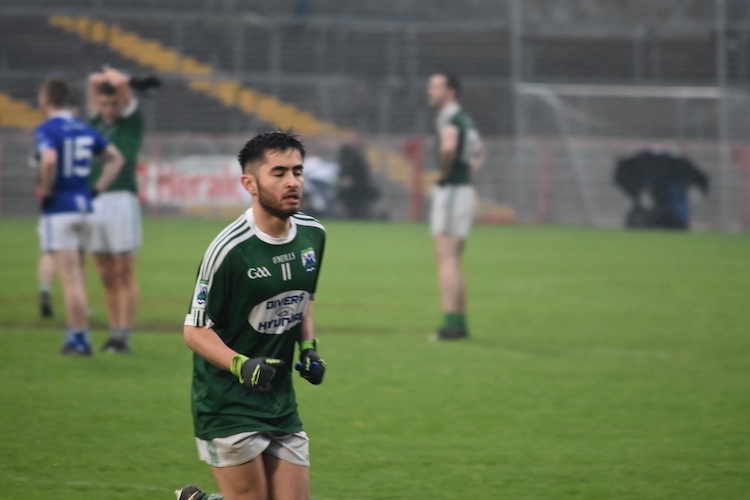 Gaoth Dobhair barely broke sweat as they did what they had to do and cruised to the last eight as winners of Group A of the Michael Murphy Sports & Leisure Donegal SFC, writes Alan Foley.

Odhran MacNiallais scored 1-3 and Ethan Harkin and Eamon Collum hit five and six respectively apiece in Kentucky. The win was rounded off with an excellent individual goal by Naoise O Baoill two minutes from time.

The journalistic fraternity and the scoreboard operator at Pearse Park had a different scoreline but it didn’t matter a jot.  For Ardara, with so many important players unavailable, it means they’ll have to keep their wits about them to avoid the worst case scenario in the relegation play-offs.

MacNiallais, without so much as a care in the world, took the ball around Ciaran Gildea in the Ardara goal to make the score 1-12 to 0-3 early in the second half and from then on it was a matter of how many.

With Eamon Collum opening the scoring for the visitors, only for Shane O’Donnell to lash over a spectacular effort as the ball dropped. However, from then on Gaoth Dobhair took control and added scores from Harkin, a Michael Carroll punch, a free from MacNiallais and then an effort from Naoise O Baoill to move 0-5 to 0-1 ahead by the 15thminute.

That margin might’ve been even more had Daire O Baoill not been just wide when shooting for goal with a daisycutter on 11 minutes.  Paul Watters pulled one back for the home team. Again, though, it was Gaoth Dobahir who took control. Harkin was on the mark, four more times, with Collum putting over a free.

Ardara’s injury jinx meant they were missing leaders such as Paddy McGrath, CJ Molloy, Peter Oliver McNelis and Conor Classon and their luck got no better when John Ross Molloy and Jack Brennan were forced off late in the half, with the latter suffering an arm injury.

At half-time, Mervyn O’Donnell’s team were in a comfortable position without ever having to over-exert themselves, 0-10 to 0-3 in front. It took goalkeeper Christopher Sweeney to make an excellent save from Brendan Boyle in the final play of the half to keep it at seven.

The Ulster champions knew that if St Eunan’s won at the Bridge in Dunfanaghy, they’d have to not only match the margin of the Letterkenny side’s victory but to win by eight more to seal top spot in Group A. As it turned out, that didn’t matter with St Eunan’s only drawing to get second spot.

Ardara have had their moments in both their opening fixtures having led St Michael’s by seven points early on prior to a 4-18 to 2-12 loss before being in front of St Eunan’s and going down 1-18 to 1-6 in the end.

Gaoth Dobhair looked as though they were turning the screw as just 16 seconds into the second half, Daire O Baoill pointed after Gildea, the Ardara goalkeeper, saved well from Naoise O Baoill. Collum then scored a point before MacNiallais scored the first goal of the day on 33 minutes.

Collum and MacNiallais kept Gaoth Dobhair on the front foot and then substitute Gavin McBride also got in on the act before Gareth Concarr, on 45 minutes, scored Ardara’s first point in 22.

The team from Magheragallon were 1-16 to 0-4 ahead three-quarters of the way through. With the issue sealed there was more of an ear on Dunfanaghy. Gaoth Dobhair had little themselves to worry about.

There was a pedestrian feel and just to make completely sure, Naoise O Baoill strode through and planted home the second goal to seal the most simplistic of wins.