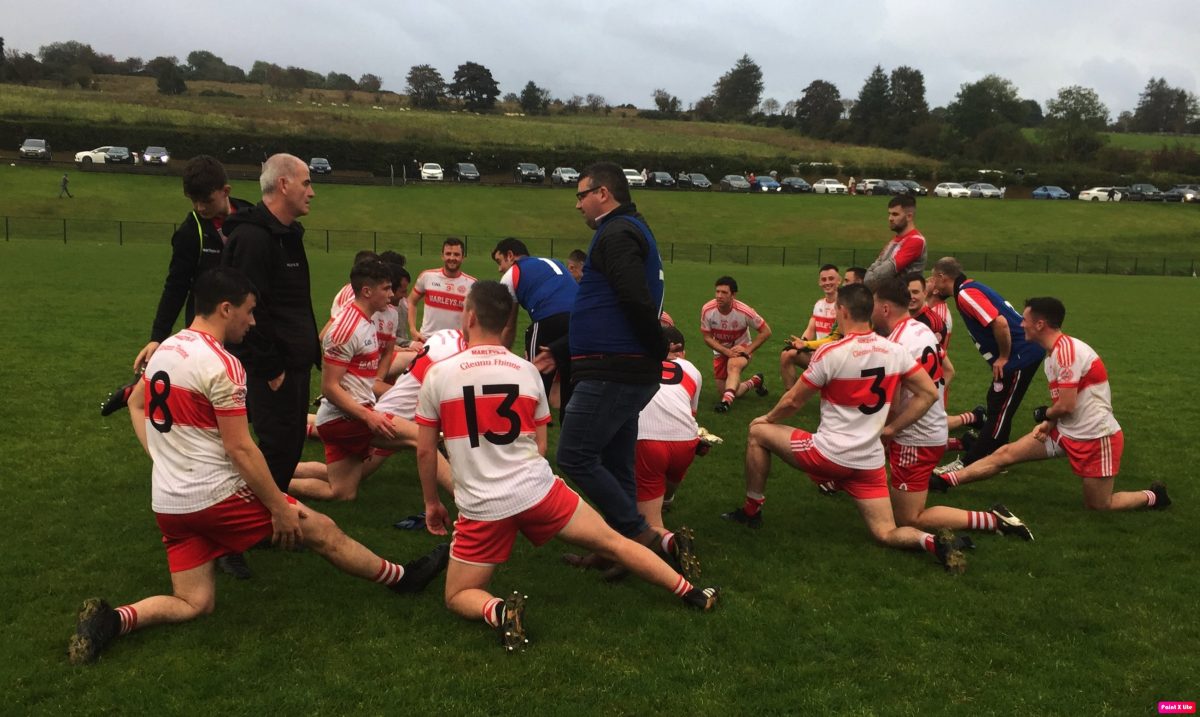 Glenfin reeled in the years to post the win they needed over Four Masters and book their place in the quarter-finals of the Michael Murphy Sports & Leisure Donegal SFC, writes Alan Foley

The team managed by Mark McGinty made their hay in the second quarter of the contest and managed then to keep their opponents from Donegal town at arm’s length. In truth, the margin of victory could have been so much more for Glenfin, last year’s intermediate champions and a side who reached the semi-finals of the SFC in 2011.

Martin Cassidy, the Four Masters goalkeeper, was excellent, making four saves to keep his team in the match for as long as they were. Cassidy should be handed the freedom of Donegal town and let graze sheep in the Diamond.

Glenfin might’ve thought their goose was cooked last Saturday evening as they trundled off at Moyle View Park with only a solitary point from their first two outings. However, Masters, the following evening, turned the group on its head with a surprise 2-11 to 0-6 hammering of Glenswilly on the road and knew a draw today would be enough.

Although Glenswilly maintained a glimpse of hope, they needed to overcome Milford, the group winners, by at least eight points more than a Glenfin victory over Masters.

Things started so fast in Glenfin, the national anthem only began ringing out just as referee Seamus McGonagle threw the ball into the air. Cassidy was involved from the off. He saved from Ciaran Brady inside of two minutes and then on 10 managed to get down bravely at Karl McGlynn’s feet. In between, Karl McGlynn did sidestep the Masters goalkeeper only for full-back Kevin Breslin to clear on the line.

Aside those goal chances, there were points. After 15 minutes, it was 0-6 to 0-2 to the home team with Gerard Ward, Odhran McGlynn, Jason Morrow and Frank McGlynn all supplementing a brace from Karl McGlynn.

Glenfin still had the waft of a goal in their nostrils and it did arrive right before half-time, with Stephen Carr managing to take advantage of a rare slice of luck in front of goal to poke home after Cassidy had saved from Aaron McGlynn and Breslin lost his footing.

At the break, it was 1-8 to 0-4 with Masters’ scores coming from Patrick Reid, John Boyle and two frees from Conor McDaid.

Glenfin knew at the interval they were in control of their own destiny and decided to press home their advantage. Just after the restart, Aaron McGlynn got away and was denied firstly by Cassidy, with another save, and then Breslin, who rose to slap away the followup at the second attempt.

With Ward keeping the scoreboard ticking over and Glenfin content to gradually sit and let their lively forwards take care of the breaks, the hosts were well-placed. It was 1-11 to 0-7 with six minutes left and Cassidy made another heroic stop, again from Brady.

Masters did give themselves a glimmer of hope when Sean O’Kennedy slammed home a knock-down from Reid when Barry Dunnion bellowed in a high one. However, Glenfin were almost there and both teams knew it, as did Glenswilly in the road.

Glenfin kept their cool and Ward added two more to make it six in all before a late score from Gary Dorrian.