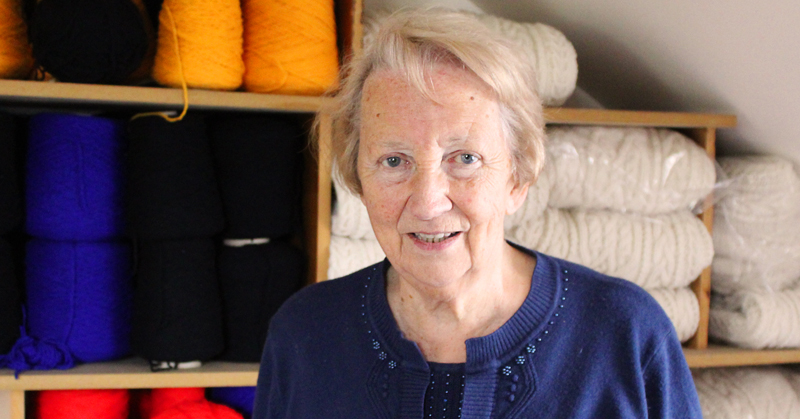 How one Donegal businesswoman knitted a community together

A simple pair of knitting needles, a few balls of yarn and a pattern – that’s all that Rosaleen Hegarty says is required to create a beautiful garment.

To create a company that has been around for 40 years and had 550 workers at its peak takes a lot more crafting.

Eighty-three-year-old entrepreneur Rosaleen remains at the helm of Crana Knits. Over the years, she has delivered an amazing contribution to Donegal and her mentoring, knowledge and entrepreneurial spirit has inspired many others to think outside the box.

Rosaleen will be a keynote speaker at the Donegal Women in Business Network 2019 Conference on October 1st. She is a perfect fit for the #LookingBackMovingForward theme, which celebrates all Donegal businesswomen through the decades.

Rosaleen’s workshop in Buncrana is a treasure trove of textiles from the years gone by, filled with unique pieces, 1,000 patterns and a few special sweaters made for some of the world’s biggest fashion designers. JW Anderson once hailed Rosaleen a ‘genius knitter’, while writer Vawn Corrigan saw her as the ‘doyen of Aran’.

Even today, visitors from the US call to Rosaleen’s door hoping to buy an Aran sweater – a piece of Irish heritage that they know is designed and knitted to perfection.

How a teacher from Inishowen became the premier name in Irish knitting is a story that weaves into Rosaleen’s personal and business life.

Rosaleen recently shared her story with DonegalWoman.ie, asking this at the start of the interview: “Guess how many times I’ve been in a hospital theatre when a surgeon has lifted a knife?”

“I’m a cancer survivor, I had three different types of cancer over the years, but I’m still here,” she said.

Rosaleen was once a primary teacher in Cockhill, in the days when needlework was on the curriculum. She had every girl in the school trained up, so by the time they finished they were knitting sweaters.

Back in 1950s Buncrana, once a girl reached the age of 14 there was no secondary school for her, and she couldn’t start in one of the local textile factories until she reached 16. 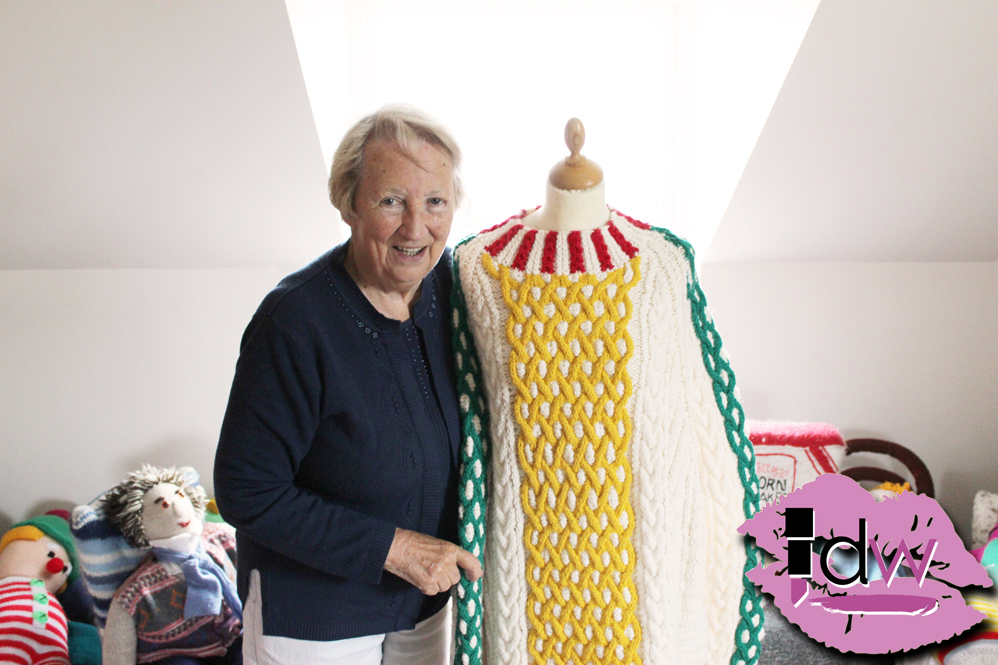 Aran knitting was beginning to emerge as a fashion, so Rosaleen enlisted her friends to order sweaters. She wrote the patterns and gave out the wool to the girls.

“I would get 10 shillings out of the women to give to the girl for pocket money, and that’s why they loved knitting,” she said.

The girls taught their mothers, sisters and neighbours to knit, and soon a knitting empire was born in Buncrana. Little did they know that this was the origin of Crana Hand Knits, a company that would represent the knitting tradition all over the world. 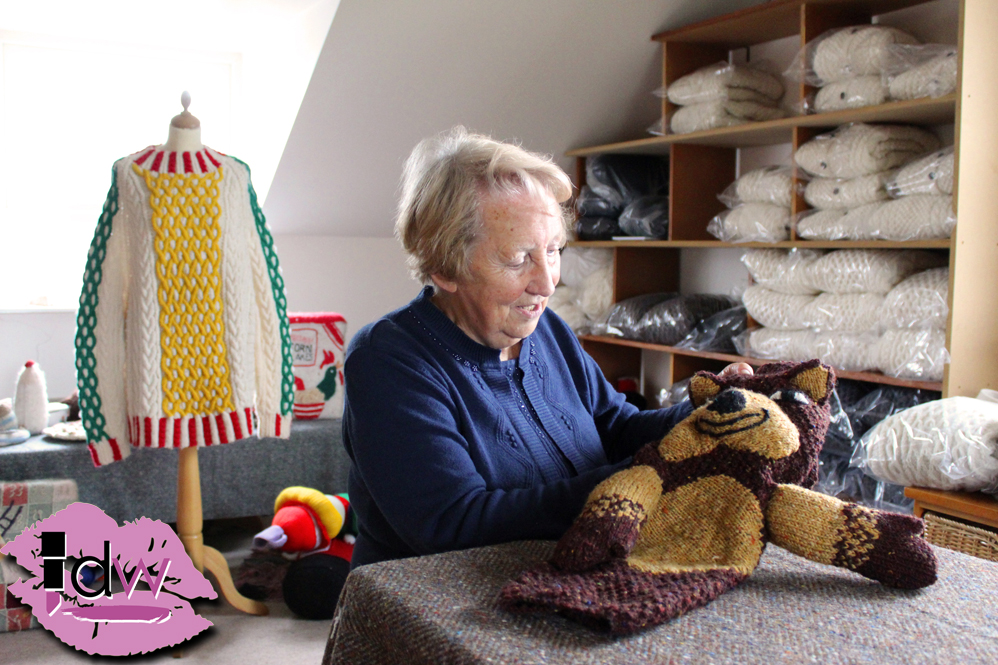 Business was going great until Rosaleen, who is a mother of six, was first diagnosed with cancer at the age of 46.

She underwent a hysterectomy, but two years later, she had to have a mastectomy and twelve months of chemotherapy. Many other procedures followed over the years and Rosaleen has never gotten the all-clear, and to return to teaching she had to be clear for five years.

But her knitters were always there for her.

“At the time of the cancer I called on the key knitters, I told them the truth – I said I don’t know how long I’m going to be here, why don’t you form yourselves into a little co-op, because there is good knitters all around and things are going well, and I’ll help you as long as I can.

“They came back to me and said ‘we’re just going to do it a little different, we’ll help you as long as you are here’. I just kept on,” she said.

Crana Knits was registered in 1979. The business base soon expanded from a spare room in Rosaleen’s family home to two portacabins out the back. 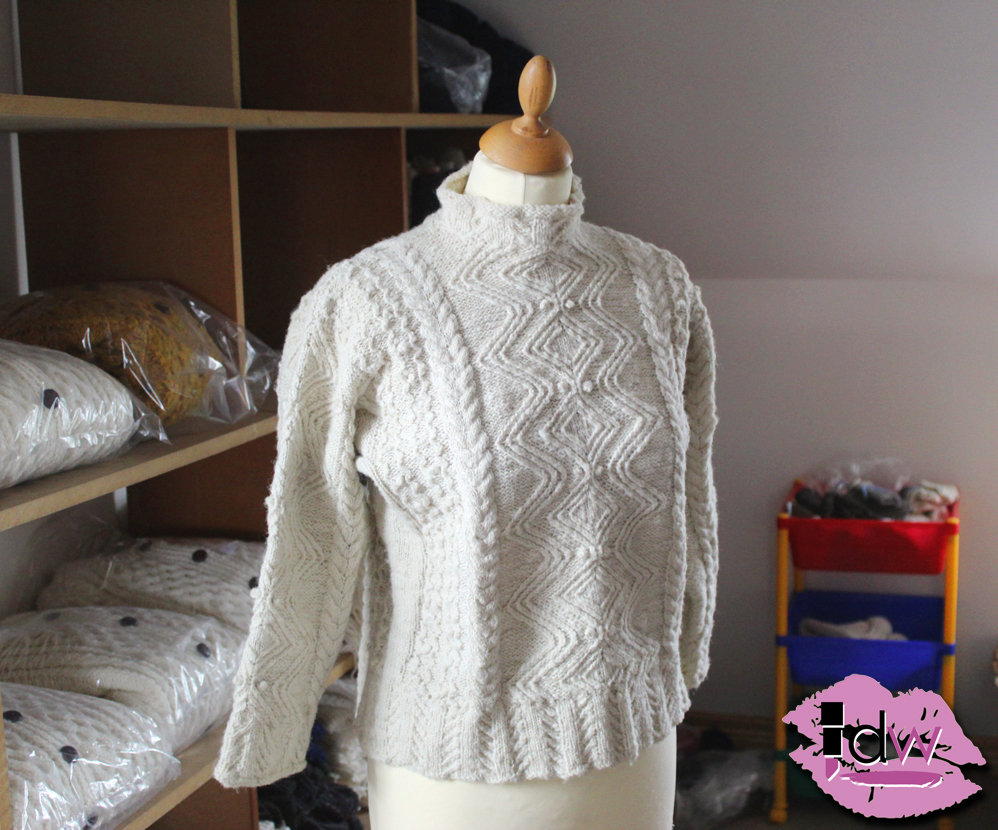 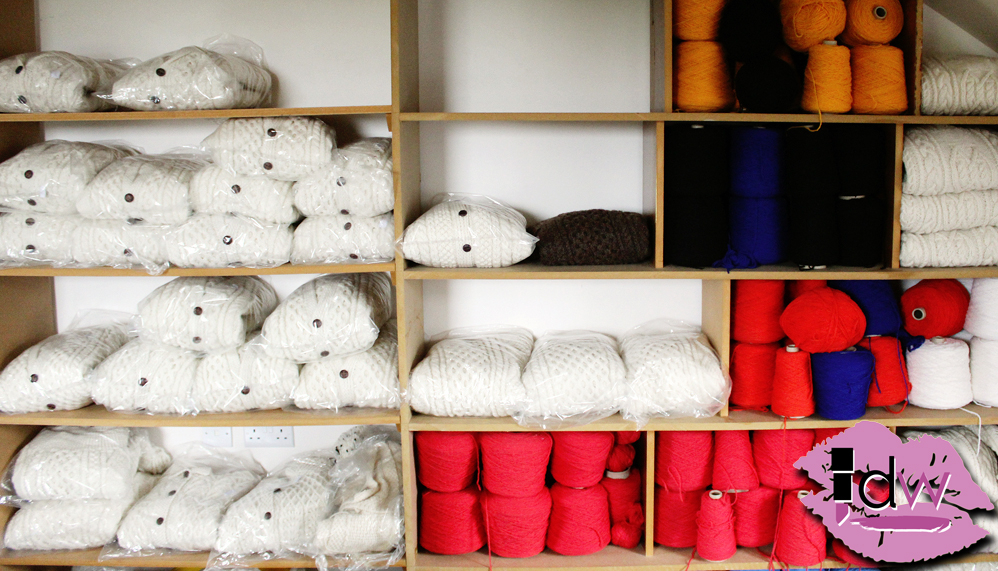 A perfectionist in her trade, Rosaleen was motivated by poor knitting in other parts of the country to establish her own knitting school.

“There was too much rubbish knitting going out,” she said. “I couldn’t bear to see knitting that wasn’t right.”

The National Knitting Centre was opened in Lisfannon in 1990. From there, machine knitters and crochet workers created clothing for stores such as Dunnes Stores and Dorothy Perkins.

“At that time I had built up and had 550 knitters. I had a little van and about 18 full-time workers in Lisfannon. All the hand-knitting was done in the homes,” Rosaleen said. 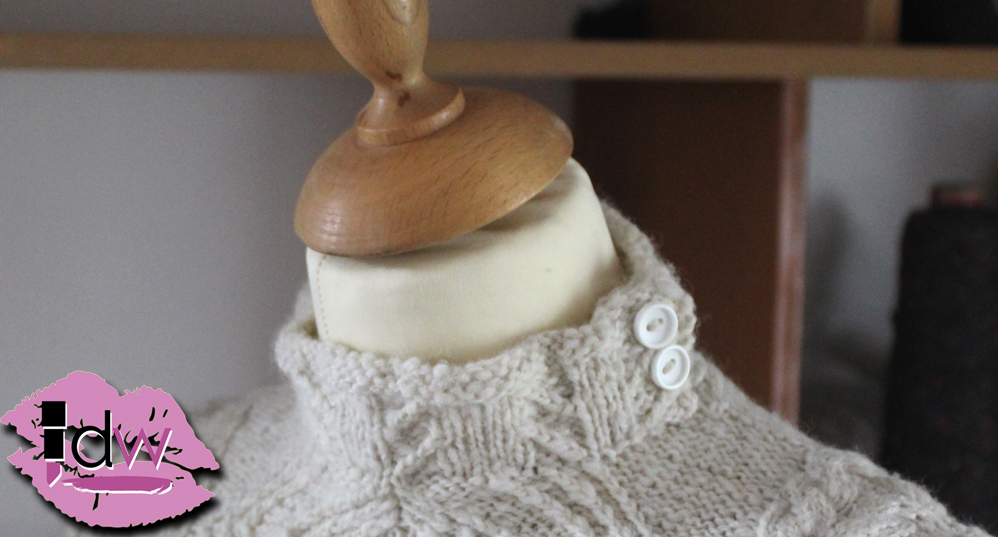 Rosaleen travelled the length and breadth of Ireland with suitcases of clothing, taking orders and selling to stores. She also put her own stamp on Aran through ClannArans – a brand of sweaters designed around Irish and Irish-American clan names.

At the same time, Rosaleen came on the radar of international designers who ordered eclectic woollen creations from her for the catwalks and boutiques. 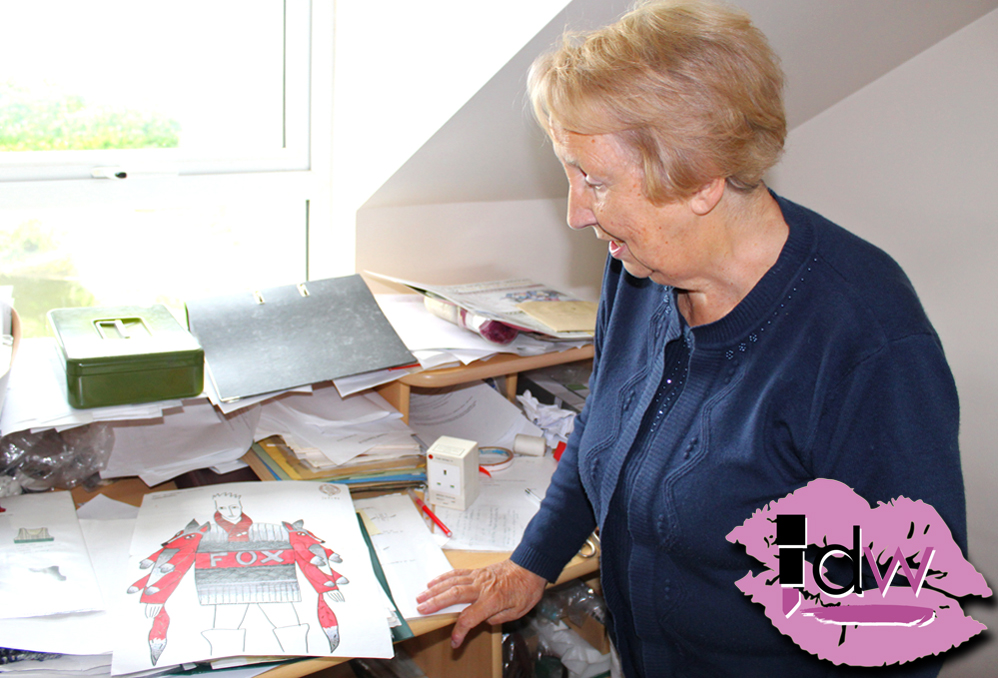 Rosaleen Hegarty, Crana Knits, looking back at the patterns she wrote for designers 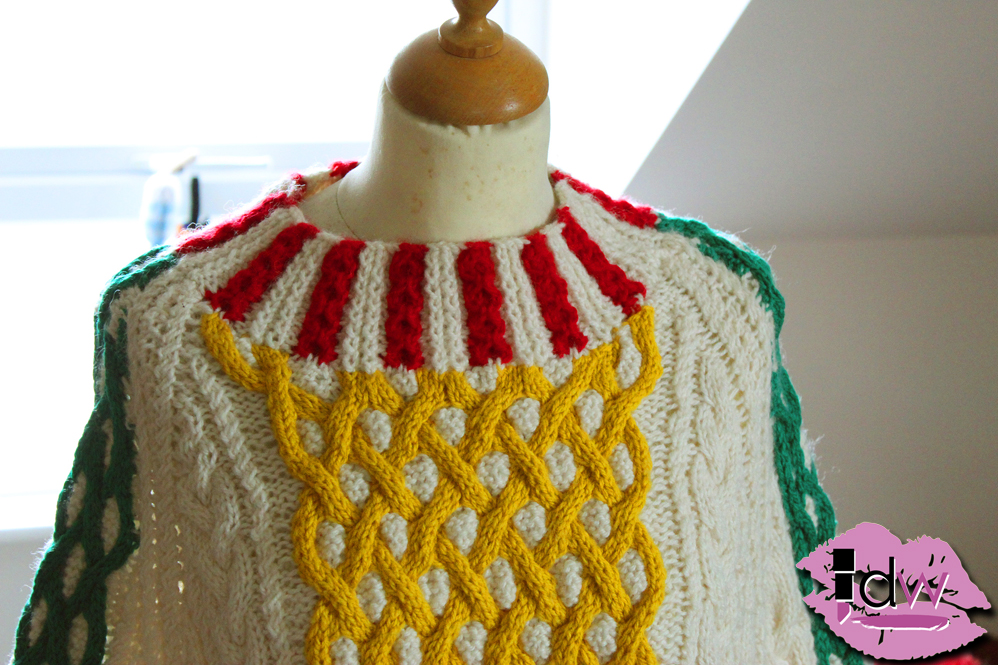 Christian Lacroix, Jean Charles de Castelbajac and JW Anderson, to name but a few, have featured works from Crana Knits. She also supplied a baby shop owned by Susie Hilfiger.

“Tommy Hilfiger and his wife Susie would have been down here quite often. If they had a gift they wanted to give anybody, they would come to me for a sweater,” Rosaleen recalled.

Derry-born actress Roma Downey, star of Touched by an Angel, is also a big fan of Crana Knits. She wore a woollen coat in a winter scene of the popular series and has championed the company on social media.

Some of Rosaleen’s most creative patterns were written for the catwalks, and even worn by the designers themselves.

“The last big designer I had was Jonathan Anderson. We actually knitted a babysuit for him,” Rosaleen said.

“He was here and he saw a baby suit I had on a doll. He decided for the show in London he wanted one, but it was to fit him. Six foot two and big long arms and big long legs. And he wanted it in pink.

“I drafted out a pattern for one of my knitters and she knitted it.”

The only thing Rosaleen struggled with was getting one of her male accountants to try it on for size. Inishowen men clearly weren’t too accustomed to wearing pink one-piece suits. 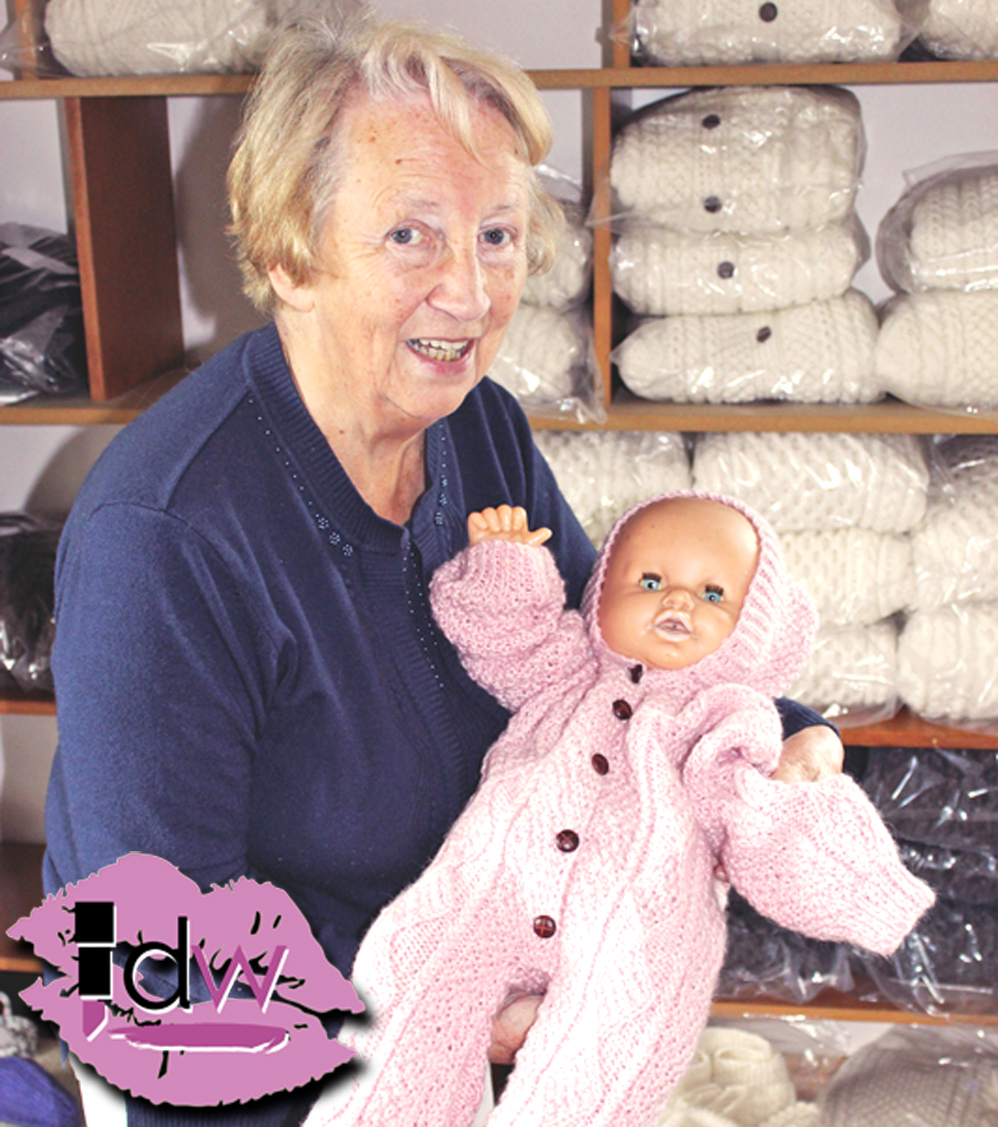 Rosaleen Hegarty with the babysuit that inspired Jonathan Anderson

Northern Irish designer Jonathan Anderson loved the suit so much that he wore it on the catwalk twice – first in pink and dyed black the second time. Rosaleen was invited over to London Fashion Week as the fashion house won the menswear award for knitwear.

Many more invitations came from the US throughout Rosaleen’s career. She represented Donegal and the Irish knitting sector at Milwaukee Irish Fest, the Ireland Show in Secaucus and in Boston with the Irish Trade Board.

“I exported before I sold on the Irish market,” she explained.

The Crana Knits American market sales began with Alex McGrath of Donegal Imports, who recommended Rosaleen to his contacts across the States.

She still exports to Irish stores in America, as well as Japan, with around 50 Irish knitters working for her across the country.

The broad reach of her company made Rosaleen stand out among the first members of the Donegal Women in Business Network. At the first-ever meeting in Ballybofey in 1999, she found that no other local businesswomen were exporting at that time. 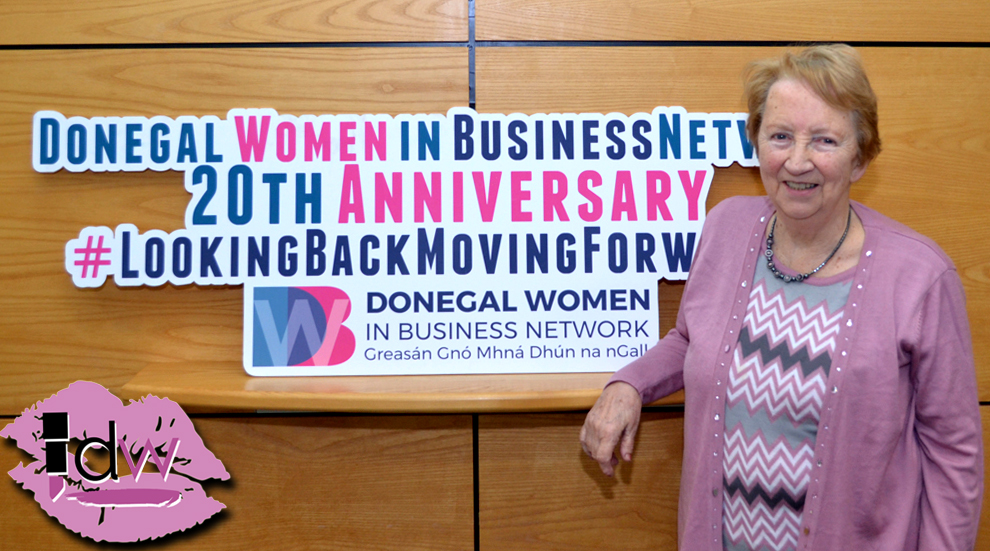 Looking ahead to the future of her own sector, Rosaleen is not so hopeful for modern day knitting.

“It’s dying out,” she said. “Even the small Irish shops in American are closing.”

To revive the craft, she said she would love to see knitting being taught in schools again.

Rosaleen is doing her part to keep the art alive by preserving her patterns. A thick folder, packed with reams of patterns is the starting point of her book. It’s a work-in-progress, she said, with 50 lessons on Irish Aran Knitting to help people discover a love for the ‘fascinating craft’.

Rosaleen’s unique skill for writing patterns is what has set Crana Knits apart, she believes. “I put it all down to writing patterns, knowing your business and being unique with your designs.”

Some of her staff have been with the company for over three decades. In this time though, Rosaleen has yet to find someone to continue with the art of pattern writing. This, she said, is all she needs to hand over the reins.

“I will retire like that (clicks her fingers) if somebody would take over, but I have fifty people working and I am not going to let them down.”

If you’d like to hear more insights from this iconic Donegal businesswoman, make sure to come to the Donegal Women in Business Network’s 20th Anniversary Conference on October 1st.

Tickets are on sale now at:  https://bit.ly/2MjteJT 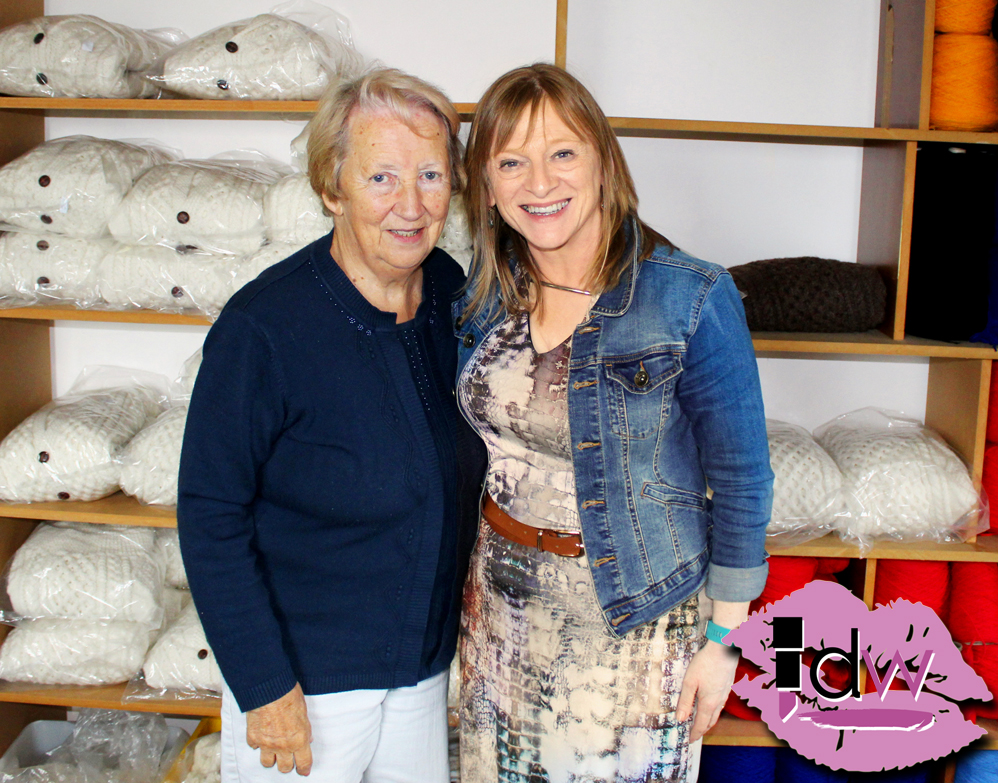 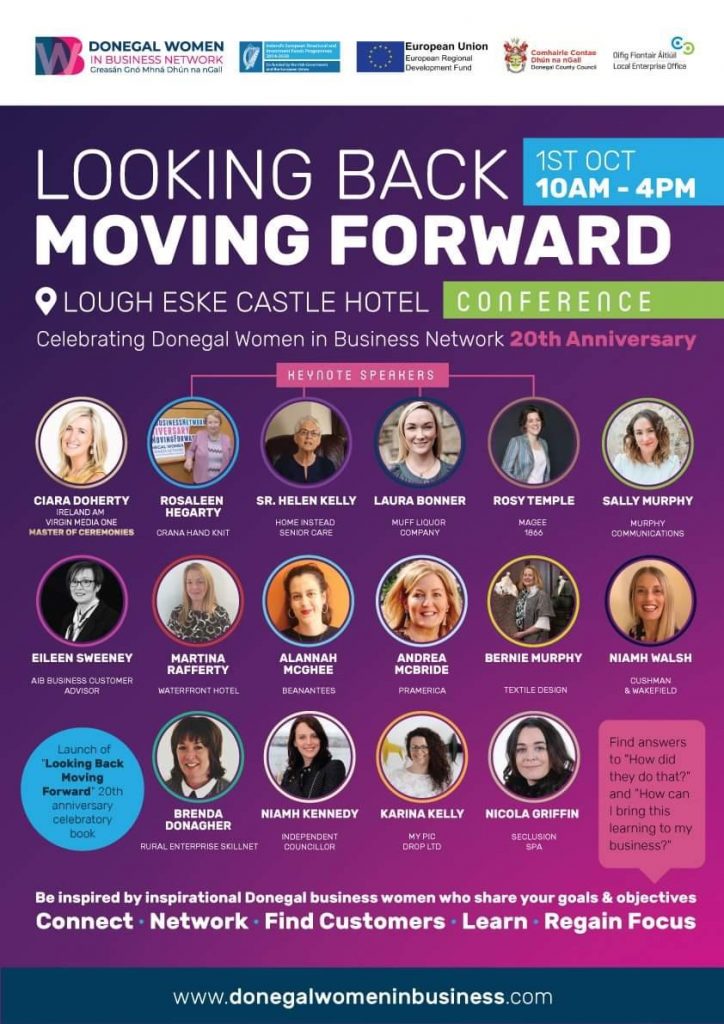